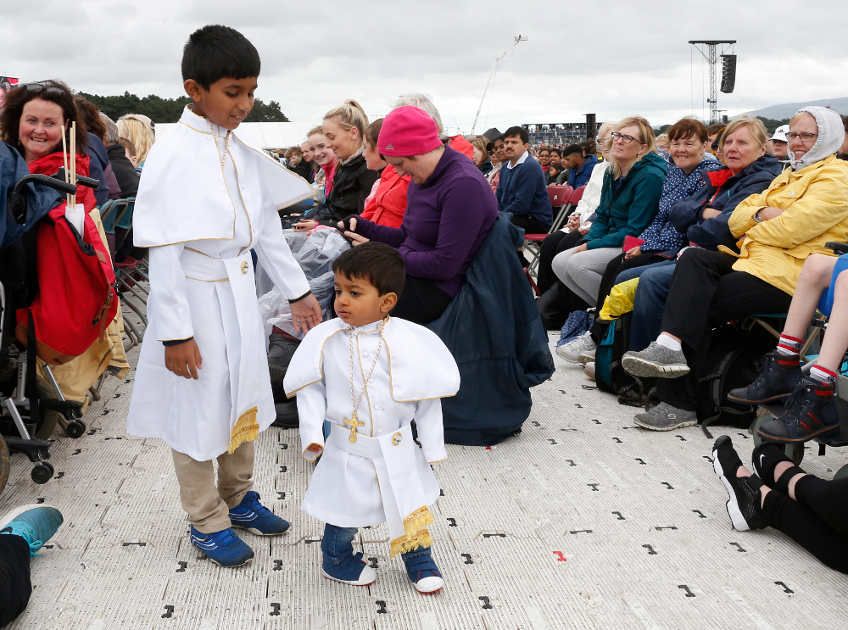 We in the newsroom at NCR's HQ and our reporters in the field were prepared for a busy weekend, but we had no idea what would come. Let me give you a brief outline of events.

Friday, the Irish Catholic Church was in the midst of an international celebration of famlies, though not without some glitches, as NCR's Jamie Manson reported: Chasing rainbows at World Meeting of Families

Saturday, Pope Francis flew into Dublin for a visit to the World Meeting of Families, but the issue of sex abuse followed him. He addressed it head on: In Ireland, Francis admits church failed to protect children, caused 'grave scandal'. He went so far as tell (reportedly) a group of eight Irish survivors that the abuse cover-up was, Francis spoke in Spanish, "caca." His translator clarified for the group: "Literally filth as one sees in a toilet."

We settled in for what we thought would be a relatively quiet Saturday night, but then a bombshell landed. Early Sunday morning (the middle of the night in the U.S.), the National Catholic Register, the newspaper owned by EWTN, and the radical rightwing anti-abortion website Lifesitenews.com released an 11-page letter from a former Vatican ambassador to Washington, Archbishop Carlo Viganò, filled with accusations against dozens of former and current high-level Church officers, claiming there was a systemic cover-up of allegations that now former cardinal Theodore McCarrick was sexually abusing seminarians. Francis was in on the cover up, Viganò charged, and he demanded the pope's resignation.

News of the letter broke just as Pope Francis was beginning Mass for the family gathering, where he again addressed the abuse issue (but not the letter). Pope begins Mass in Dublin with penitential plea for abuse scandals

As you can imagine, reactions to the letter came fast and furious, as Heidi Schlumpf reported: Vigano letter draws fiery rhetoric from pope's opponents

When Francis got on the plane to return to Rome, he spent about 45 minutes with journalists, our Joshua McElwee among them. Francis advised journalists to "read the [Viganò's] statement attentively and make your own judgment." "I will not say a single word on this," the pope said of the letter. "I think this statement speaks for itself, and you have the sufficient journalistic capacity to draw conclusions."

Meanwhile, here in the U.S., pew-sitting Catholics are trying to come to grips with what they are seeing unfold:

A meditation by Sr. Nancy Sylvester: The clerical church in search of its soul

And in other news:

Sen. John McCain, a former prisoner of war who embraced patriotism loudly and religion quietly, died Saturday at the age of 81. Sen. John McCain: Known as a veteran but also a man of quiet faith

One of my favorite authors -- Paul Elie: What the Catholic Church Crisis Should Teach Us About President Trump’s 'Witch Hunt' Claims

In a study of 40 peace processes since the Cold War, Olivia Holt-Ivry says researchers found that when only men sit at the negotiating table, cease-fires fall apart. Women Make Peace Stick (You may have to register to read this, but it's worth it.)

On messages and messengers