Salvation through Christ is available to all 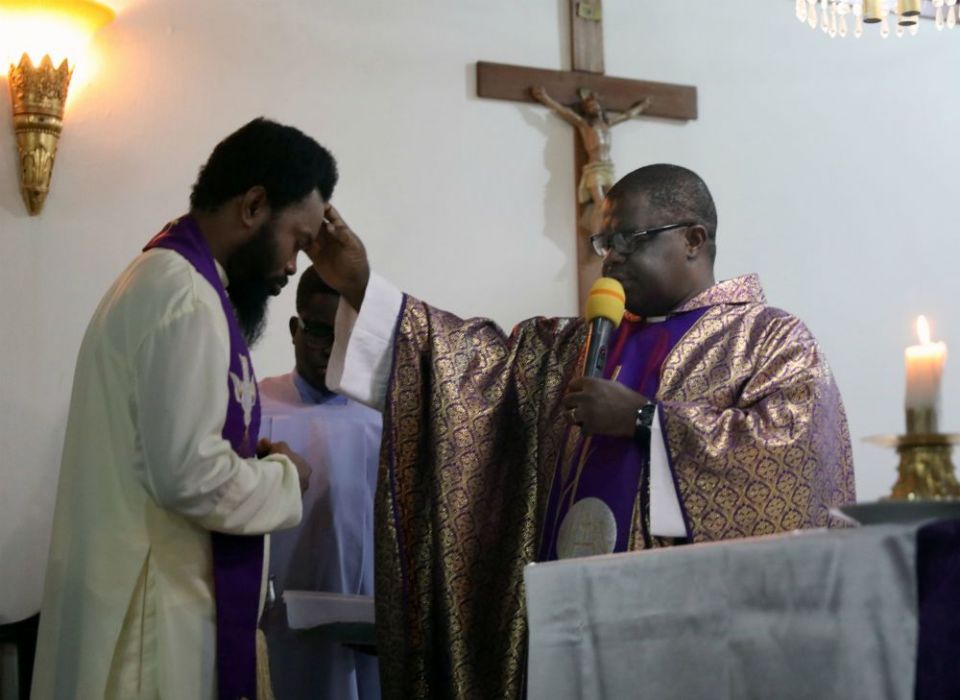 A priest marks a cross on the forehead of a clergyman during Ash Wednesday Mass Feb. 14 at Holy Rosary Catholic Church in Abuja, Nigeria. (CNS/Reuters/Afolabi Sotunde)

I once wrote a paper on the Pelagian Heresy while I was in the seminary. I received a D-minus on the paper. Somehow, I was intrigued by Pelagius' notion that grace helped one to successfully exercise free will to earn one's salvation. It made sense to me at the time that if one had even a tiny role in effecting one's salvation, then it was true to say that you were responsible for your own salvation. Needless to say, my professor was not amused.

I think it is also fair to say, however, that the proliferation of 300 days' indulgence and plenary indulgences of that time period seemed to encourage the notion that we did have a role to play in our own salvation.

I have since become much more enamored of Paul's concept of justification by faith. Of course, we cannot earn our own salvation. It is God's free gift to us earned through the salvific work of Jesus and not our own actions.

Yet, as in so many things when it comes to God, we make a mistake if we believe we can explain or understand the actions of God. This is why it became necessary for the Congregation for the Doctrine of the Faith (CDF) to issue a new document on modern forms of old heresies. The letter, Placuit Deo, addresses the issue, and my old friend Pelagius is included in the discussion. Gnosticism, which claims a special knowledge, or gnosis, not available to others is also considered.

As Christians, it is clear to us that salvation comes through Jesus Christ. How that reality gets interpreted is critical. Vatican II began the process of recognizing the value that exists in other Christian denominations, other religions, and all people of good will. The language and categories of Vatican II were limited by what had been in use for centuries, but the intent was to recognize that the Catholic Church was not the only institution that possessed truth.

Pope Benedict XVI, in his 2000 declaration Dominus Iesus, allowed the use of language to limit the document's expression of the value other people and institutions had. He did not use the word church for other institutions. He focused on what was deficient in each group he mentioned. The document did little to foster efforts at ecumenism.

The new CDF document wisely tackles the subject from an entirely different angle. It focuses on what it sees as the reappearance of old heresies in new forms. The message of the letter is that salvation comes in community, specifically in the church. An individual needs the sacramental structure of the church to obtain the salvation available in Jesus. The gnostic failure to see the importance of our bodies, and thus the incarnation, misses the material aspect of Christ's salvific work, and thus fails in its understanding of salvation in the church.

So, we just can't divorce the subject of salvation from the church. It seems then, we are stuck with the old Catholic dictum of "extra Ecclesiam nulla salus". But not so fast. The most important line of Placuit Deo is: "God can lead all men of good will in whose hearts grace works in an unseen way towards salvation in Christ."

Once again, we are reminded that all things are possible with God. We look with confidence at God's love and mercy, the good news of the Gospel, and the saving work of Jesus for us. We know with certainty that he desires all to be saved. We don't know how, but we know he is not limited nor constrained by our primitive formulations of truth.

Maybe that's why it seems so wrong in the new Mass translation to speak of Christ's blood being poured out for many in the words of consecration. Can there be any doubt that Christ suffered and died not just for many, but for all?

Opinion | Salvation through Christ is available to all

Education is key to spiritual formation of sisters

Hang on to the ecclesial nature of the theological task