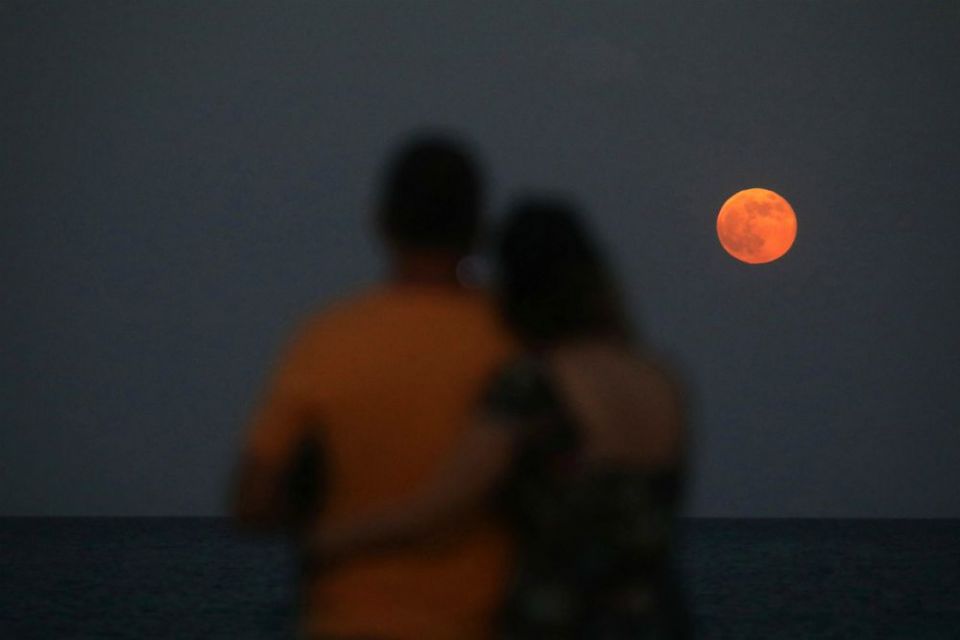 A couple watches the rise of a "strawberry moon" in Larnaca, Cyprus, June 28. (CNS/Reuters/Yiannis Kourtoglou)

When I was reflecting on the Scriptures, especially the Gospel lesson, it brought back to my mind something that happened at a bishops' meeting many years ago. The United States bishops had, sometime after the Vatican Council, arranged with the Roman authorities for special arrangements for the United States to obtain annulments for Catholics who were divorced. These were temporary. The bishops had asked for them in order to speed up the process because it had been so complicated and actually was often very expensive.

Rome sent notice that the time was up, these were temporary, now we go back to the former canon law, and we must follow it. Something unusual happened in that bishops' meeting because one after another a bishop got up and said, "No, we've got to protest to Rome. We're not going to accept this. These special arrangements have worked very well and we need to keep them." I wondered to myself, "What's going on?" United States bishops usually don't contradict Rome. They're very obedient.

But then I thought of myself, and I thought as I looked around at the other bishops, that every one of them I was sure had a brother, sister, cousin — someone close to them who had undergone divorce — a very hard thing as I'm sure we're all aware. They wanted to make sure that the arrangements that allowed people to have an annulment and be free to marry would continue. They did, actually, so we were able to keep using the new norms, as they were called.

That came to my mind because in the Gospel lesson, it seems so clear that Jesus, almost in a harsh way, says that there is no such thing as divorce and being remarried. If a husband divorces his wife and remarries, he commits adultery. Jesus says the same thing for a woman. He seems very clear and even very harsh about it. Yet, if you look at how Jesus acted, it doesn't come across the same way. Do you remember the woman who was taken in the act of committing adultery?

The Pharisees brought her and made her kneel on the ground in front of Jesus and said they wanted to stone her. Remember what Jesus did? This was a woman who was committing adultery against her husband. She should be stoned. Remember? Jesus knelt down and began to write in the sand, and gradually one by one the Pharisees left. Jesus had said, "Whoever is without sin throw the first stone." He had mercy on that woman. He wasn't about to condemn her, have her stoned to death.

Or the Samaritan woman at the well — she wanted to know more about Jesus. Jesus said, "Go get your husband." She said, "I have no husband." Jesus said, "Yes, that's the truth because you've been married five times. This person you're with now is not your husband." But then, what happens? The woman is accepted by Jesus and then sent back to the town and told to spread the good news. She became a disciple. She didn't go through any process of divorce or annulment or anything of the sort. Jesus immediately forgave, gave her a chance to begin a new life.

Jesus really does have a merciful approach to this. And of course, divorce is a difficult and very serious problem in our society. Something like 40 percent of marriages end up in divorce. It's a very high percentage for Catholics, too. What then are we to do? Marriage is between a man and a woman and is for life — till death do us part. It isn't as easy as it may seem, especially to young people when they're getting married. It isn't as easy as, I'm sure many of you know, to make a marriage work, to make it be fruitful, loving and cause each of the people in the marriage to grow and develop and their love to grow and develop. Not easy at all. And that's why divorce does happen.

But sometimes there are causes that go back even before the marriage happened that mean that a marriage as a sacrament did not take place. This is the difference between divorce and annulment. An annulment means just a declaration. It's not a decision like a divorce where a judge says, "Okay, now you were married; you're no longer married." An annulment means that something blocked, not the legal marriage — they're still married legally and would have to get a divorce if they're going to separate — but there was an impediment that caused the sacrament not to take place.

So, in our theology of marriage, it's developed a great deal. When I was ordained a priest quite a few years ago, the canon law said that a marriage is a contract between a man and a woman where they give themselves to each other in a contract. That's all it says; it was a canon law. It gave to each party rights over the other. That contract could not be broken. Well, a sacrament is something much deeper. It's not just a contract. In fact, there was a great development in our theology about marriage at the Vatican Council.

The bishops there brought out truth about marriage that go back to the beginning of the sacrament but had not been emphasized, that marriage is a covenant, like the covenant between God and the chosen people. I will be your God; you will be my people. There will be a bond of love that keeps us together. Marriage is supposed to be that kind of a covenant, not a contract fighting over rights, but a covenant of love.

That's what the first lesson today teaches us. What that first lesson, that description of creation, teaching about man and woman and coming together in union — it's mutual. Neither one, yet they're both made from the same flesh. "Bone of my bone, flesh of my flesh," the man says — someone who is equal to him. In that lesson that talked about how the man had named all the animals, which gave domination over animals in the thinking at the time of the Book of Genesis, but he didn't name the woman. She was equal to him. They're both equal and their relationship has to be mutual.

Later on as we develop this, we understand that marriage — actually this came up a couple of weeks ago where we were talking about how everyone of us is called to be prophets. I suggested that the most important prophets in our church are married people because through that union of marriage we proclaim, as the prayer at marriage says, that the love of a husband and wife for each other is a sign of the love of Jesus for his church, a love that's unconditional, a love that's forever, a love that's mutual.

Married people are prophets showing forth the love of God for us. God is love; where there is love there is God. Married people say that by their lives more than anybody else in our church. So marriage is that deep union between a man and a woman that causes them to come together and be one in mutual and fullness of love for each other. It doesn't come to fullness at the beginning, of course, it comes over the years. But sometimes something can block that sacrament from happening. What they call in canon law "lack of due discretion," two people rush into marriage too soon without thinking it through, without being prepared; it doesn't last. It never even started, if you can show that was the case.

Other times it's just a deep incompatibility where two people cannot develop a mutual love that is required to make the sacrament of marriage a reality. So that can be examined, and then it can be shown so that then there was no sacrament. People are free then to get the divorce and remarry. This is how it works in the church. Sometimes, I guess, a marriage can break up; there was a true sacrament. But most of the time when marriages break up, there was probably something there at the beginning that wasn't noticed at the time, but it brought an impediment so sacrament did not happen.

It's important for us to think about this or to reflect on this in the light of today's Scriptures because we want every marriage to be what it's destined to be or supposed to be — that sign of the love of Jesus for his church, a sign of love that again, is without limit, without condition; it goes on forever. And the more people can do that and show forth that kind of love, the more they say who God is. God is love, so married people, when they live the sacrament, proclaim who God is, make God present within our society. It's the seed that can bring about change, can bring about goodness and love — all the things we long for in our everyday life.

As, so, we listen to these lessons today, I hope we understand, first of all, how Jesus was very understanding and merciful to people who were in marriages that didn't work. He loved them — the woman at the well, the woman taken in adultery. He loved them, and he wanted them to experience his love and be able to change and grow. Jesus loves each one of us, and he loves, I think, in a very special way married people who witness to that love that God is. As we reflect on these Scriptures, it's a time for us to pray, I think, for families, for married people, that they may be faithful to their call to be prophetic and witness to the love of God in our midst.

[Homily given Oct. 7 at St. Philomena Parish, Detroit. The transcripts of Bishop Thomas Gumbleton's homilies are posted weekly to NCRonline.org. Sign up here to receive an email alert when the latest homily is posted.]

By the numbers: Statistics illustrate progress in tribunal reforms

Marriages start in a church, but where is the church when one ends?

Cardinal Pell rules out change on Communion for divorced, remarried