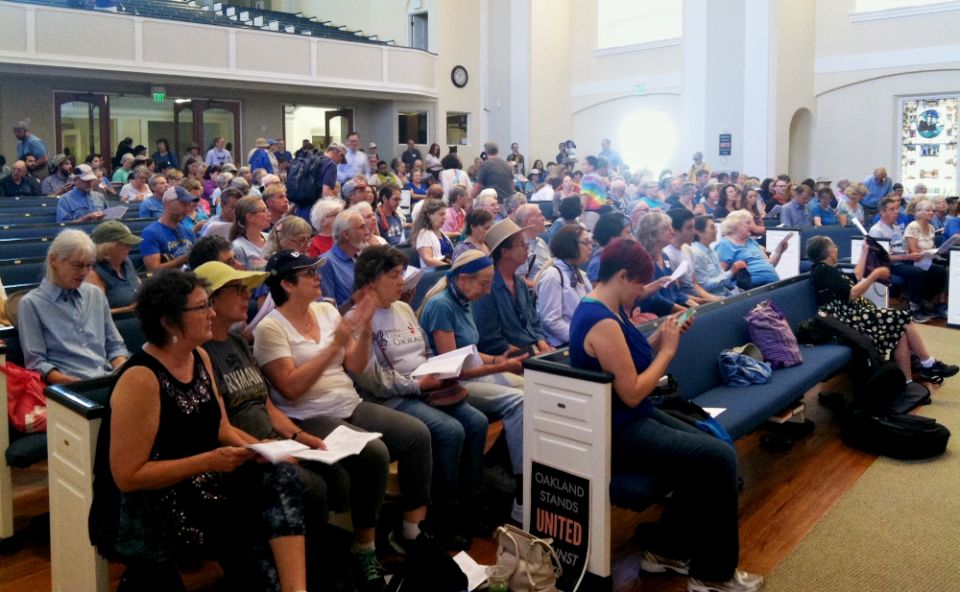 An interfaith crowd gathers in First Congregational Church in Berkeley, California, to prepare to participate in a counterdemonstration to a march organized by white supremacists. (Tom Webb)

Berkeley, Calif. — The desire to "make me a channel of your peace," the familiar opening verse to "Prayer of St. Francis," was noticeably present the afternoon of Aug. 27 at the First Congregational Church in Berkeley. The overflow interfaith crowd, numbering more than 300 people, gathered beforehand to prepare to participate in a counterdemonstration to the "March Against Marxism" that had been organized weeks before by white supremacists.

For over an hour before joining the larger crowd, which was estimated to number more than 4,000 people marching to the Berkeley Civic Center, those gathered at First Congregational Church prayed, quietly meditated and sang songs to bolster their spirits for the day ahead. 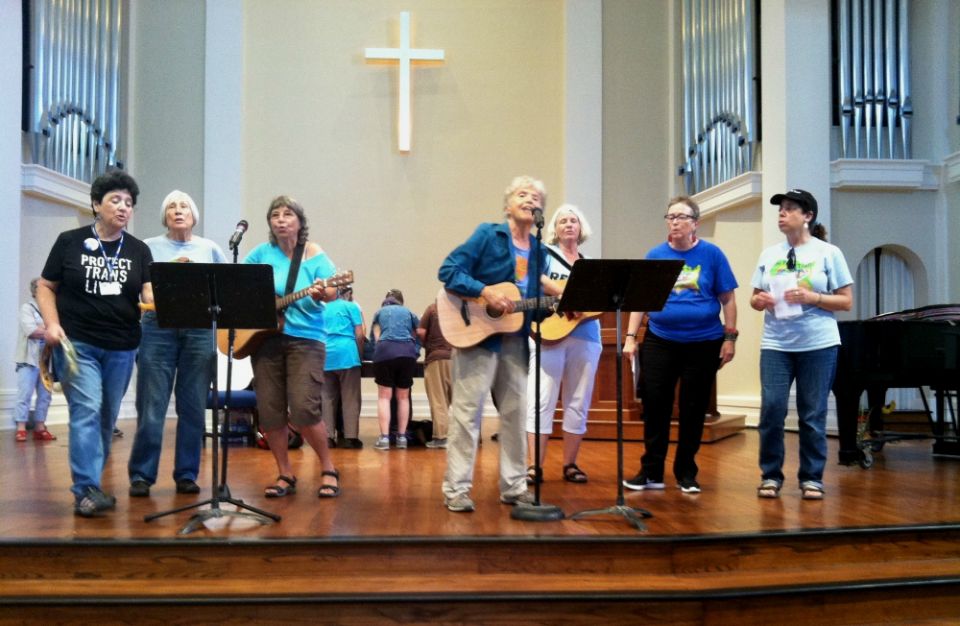 Songs of spiritual presence and moral protest like "We Shall Not Be Moved"; a Hebrew chant based on Psalm 18; "De Colores"; "Peace, Salaam, Shalom"; and a new song to this reporter's ears, "Put One Foot in Front of the Other" were sung. A coalition of women of faith enthusiastically led the early afternoon's preparations.

The crowd, which was initially heavily white, was soon graced by the presence of African-Americans arriving from church services.

Great concern was taken to provide for the spiritual well-being of those preparing to march. Besides the prayer and song, a statement of purpose and list of guidelines were offered. Included in the day's mission statement was the promotion of "asylum for all" and to create "sustenance for the times to come."

Organizers repeatedly reminded the crowd they were not alone in their fears or private concerns. Rather, marchers were exhorted with earnest chants of "We gotta go together." Given the grave fears of outbreaks of violence similar to that in Charlottesville, Virginia, the week before, participants were encouraged to share their anxieties and concerns with assigned chaplains. A meal and community-sharing were promised at the end of the day's events. 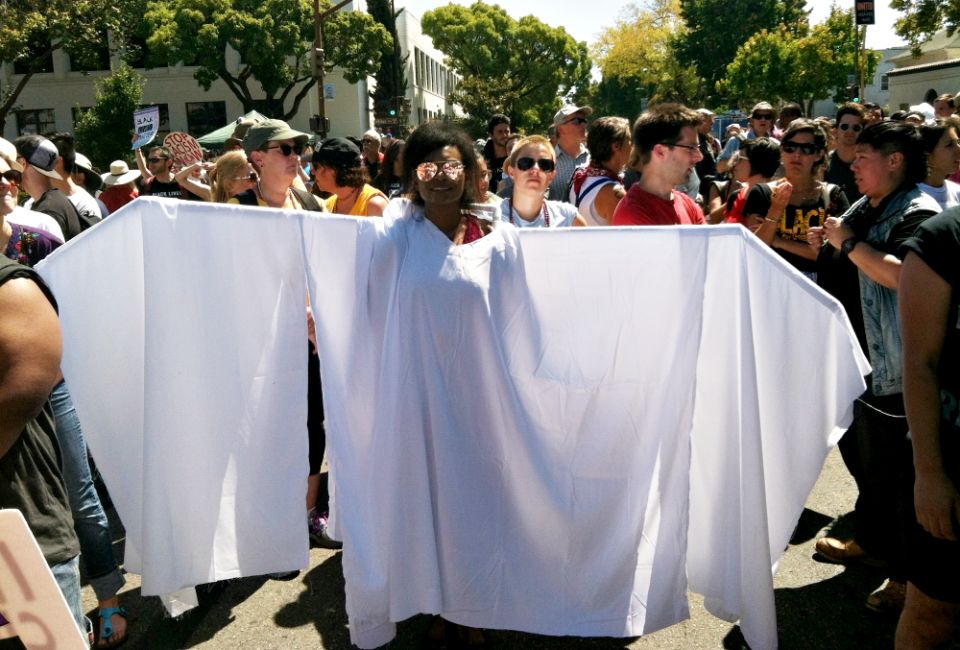 The presence of white-clothed angels with wide wings highlighted the spiritual character of the marchers. (Tom Webb)

Adequately nourished, the crowd slowly funneled out into the Berkeley streets to begin the 1-mile walk to the Berkeley Civic Center. Marching joyfully and singing gently under the bright, warm afternoon sunshine there was no violence along the way. The sporadic presence of white-clothed angels with wide wings highlighted the spiritual character of the marchers.

Overhead, several helicopters circled the march route and the Civic Center, a vivid reminder that the day's events were charged with threats of conflict and violence.

Around 1:30 p.m., marchers arrived at the west side of the Berkeley Civic Center. Access to the Civic Center Park outside Berkeley's City Hall had been blocked the evening before with 10-foot-long concrete dividers surrounding the entire perimeter. Entry into the area was further prohibited by a noticeable police presence from Berkeley and other local departments. By 10:00 a.m., it was virtually impossible to enter the area. 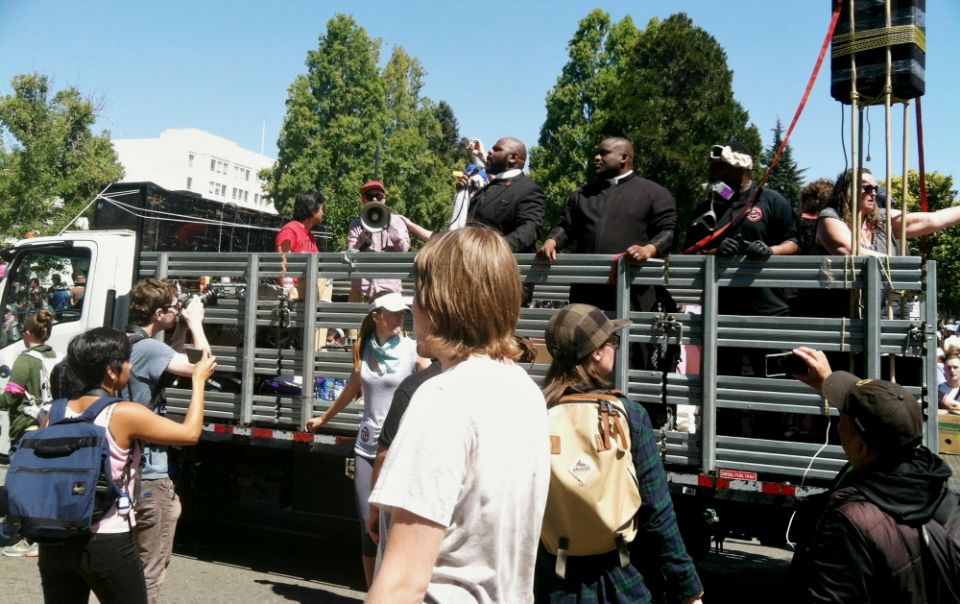 A large flatbed truck pulled up into the middle of the gathered marchers. African-American pastors Ben McBride and Michael McBride and others led the crowd in a variety of chants intended to energize the faith community.

Marchers were reminded that Berkeley's streets were "our streets" and that "black lives matter." Other popular slogans were meant to draw clear ideological lines between the beliefs of those who had earlier organized the "March Against Marxism."

Riot-ready police separated the two groups to prevent them from fighting. By 11:50 a.m., police led a handcuffed man out of the Civic Center. According to witnesses, the man had attempted to start a fight.

Shortly after 1 p.m., approximately 25 Trump supporters and other right-wing protesters had gathered in the park wearing red baseball caps emblazoned with Trump's campaign slogan to "Make America Great Again." According to the East Bay Times, they were surrounded by several thousand counterprotesters chanting vehemently in response to their message and presence.

By the end of the afternoon, Berkeley police said 13 people had been arrested on suspicion of a variety of charges, including assault with a deadly weapon, felony assault and other violations of Berkeley's municipal code.

It cannot be overlooked that the day's demonstration was also marked by the ominous presence of at least 100 members of the anarchist "black bloc" fringe group. Dressed in black clothing from head to toe, with bandanas pulled over their faces, marchers of this affiliation remain problematic. Commentators like Presbyterian minister and journalist Chris Hedges and MIT Professor Noam Chomsky have published recent articles critiquing the violent tactics often employed by black bloc members.

Despite Yale professor Cornel West's claim that their presence was consoling when faced by the rabid and hostile Ku Klux Klan and white supremacist groups during the demonstrations the week before in Charlottesville, forms of alliance with black bloc members will continue to threaten the integrity and initiatives of the faith communities to oppose the graphic injustices now delivered against immigrants, Muslims, African-Americans and LGTBQ people.

One minister wore a sign taped to the back of her alb: "Not Today Satan". The mixed collection of the day's participants will require the faith community to embrace more deeply the importance of "discernment of spirits" in the weeks and months ahead. 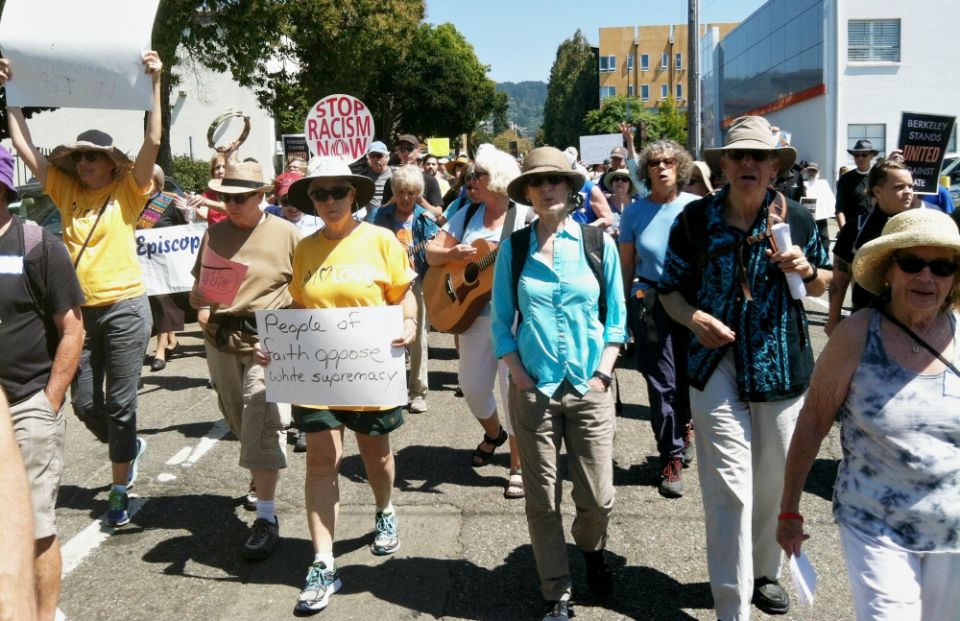 [Tom Webb is a freelance writer and member of the Oakland Catholic Worker community.]

Your thoughts on the Sojourners controversy