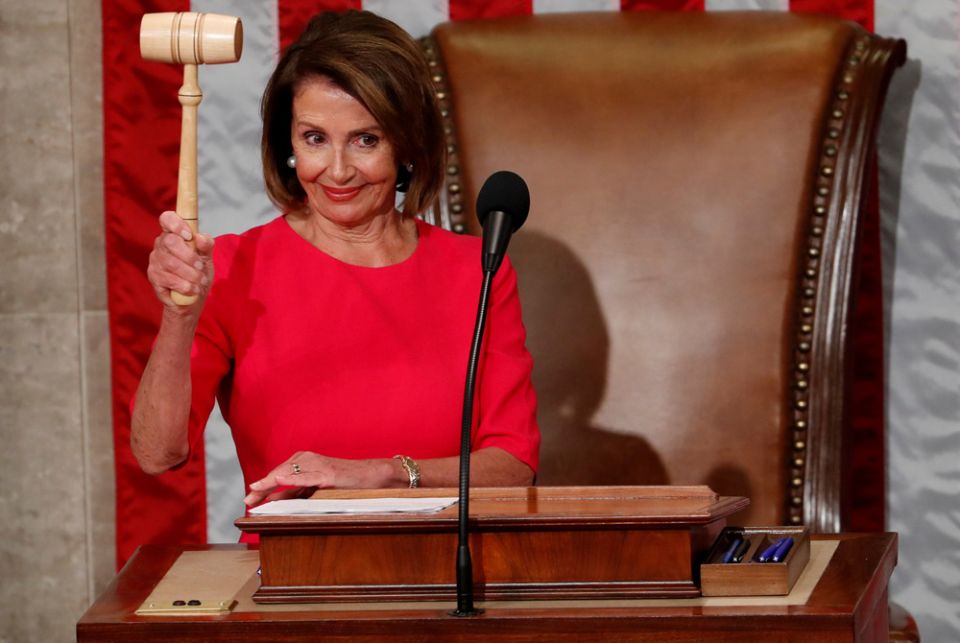 House Minority Leader Nancy Pelosi, D-Calif., a Catholic, raises the gavel Jan. 3 after being elected House Speaker of the U.S. House of Representatives at the start of the 116th Congress inside the House Chamber on Capitol Hill in Washington. (CNS/Kevin Lamarque, Reuters)

I believe Nancy Pelosi when she asserts that she prays for Donald Trump and that "as a Catholic" she "doesn't hate anybody." Pelosi's answer to a reporter's question was exactly what my answer would be.

I oppose President Trump in everything he says and does, and I think it is important to juxtapose, as she did, the things that go so deeply against her faith and mine, but that we turn into prayers for his metanoia, for his transformation.

Trump assails the core of our faith in his suicidal insistence on ignoring the sacredness of creation and pushing for the growth of fossil fuels and the dismantling of pollution controls. He has attacked my state of California and others for our environmental laws, which have substantially cleaned the air from the levels of my childhood. He attacks and builds his power against the core of both the Jewish and the subsequent Christian traditions which guide us, in his pointed attacks on the neighbor and the stranger, God's protected beloved, and his refusal to allow even the most desperate asylum-seekers to appeal for protection, in violation of God's law and international law.

He destroys the sanctity of the family and the Catholic focus on the dignity of human life when he orders that children be ripped from their parents' arms, be housed in subhuman conditions, and carry profound traumas for the rest of their lives. His administration's attacks on the poor are escalating with changes to housing and food stamps for the poor. He admires and cozies up to brutal dictators and more than anything else, the only "North Star" in his decision-making is his personal interest and his profit.

Donald Trump and Trumpism demean those who are disabled and sick, condone white nationalism and white supremacy, and gut out education budgets and assistance for students. And this is just a partial list.

So, I pray for him, I pray for that moment, that miraculous moment, when God's offer of grace can reach him. Nothing is beyond God, this I believe, and Jesus' reliance on prayer has to also be ours. No one is outside the reach of love and so I pray, and will continue to pray for this man, because the harm he is doing to all around him, is most devastatingly harm he is doing to himself, to his own image of God.

I believe Nancy Pelosi prays for Donald Trump, and I wish he would believe that many of us pray for him. The kingdom of God is fragile and it needs all of us to do the work of building it. Those in power can do much to hinder it or help it flourish. Praying for Mr. Trump.