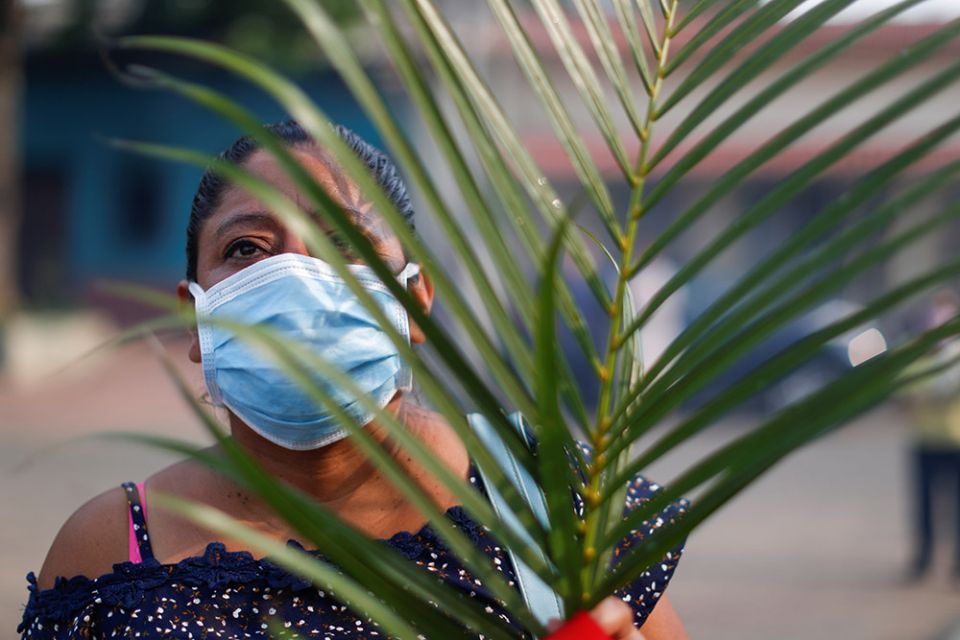 Today, we begin the most solemn, liturgically charged week of the year. When we recite the creed, we bow at the memory of the Incarnation, and this week reminds us that the ultimate effect of the incarnation of Christ is that human nature participates in God.

While that can be said simply, the church’s prayer this week leads us to realize that it happens through a long and difficult process of watching Jesus be stripped of human power so that we can learn something about what divine power is.

Palm Sunday of the Lord's Passion

Luke, like Matthew and Mark, tells the story of the last week of Jesus’ earthly life as if it were the opening of a theater production with a well-prepared script. We could say that Jesus’ procession into Jerusalem had been in process since the moment described in Luke 9:51 when, shortly after the Transfiguration and the conversation with Moses and Elijah about his “exodus,” Jesus “set his face to go to Jerusalem.” Now, with carefully chosen vocabulary, Luke tells us that Jesus was “ascending” to Jerusalem.

Before arriving, Jesus sent disciples to a nearby village to bring him a colt whose owner simply accepted the mysterious explanation that “the master” had need of it. The disciples set Jesus on a borrowed beast as if on a pauper’s throne, and Jesus entered the holy city to the chanting of people acclaiming him as the king coming in the name of God. Their singing echoes that of the angels at his birth (Luke 2:14).

Luke’s narrative draws us into a liturgical drama. Preplanned and carried through with obvious references to ancient prophecies, Jesus’ arrival in Jerusalem signaled the beginning of the final act of his earthly ministry, the baptism he said he had to undergo (Luke 12:50).

His meal with the disciples, prepared with the same mysterious precision, announced the immanent arrival of the reign of God, the realm where he would eat and drink with them after going through his own Passover.

Luke’s depiction of Jesus’ Passover supper adds to those of Matthew and Mark and even reflects John’s. In Luke, Jesus tells the disciples, “Do this in memory of me,” a phrase only he and Paul put on Jesus’ lips (1 Corinthians 11:23-25). By emphasizing that phrase, Luke teaches that all who share the “supper of the Lord” are called to do what Jesus did: consecrate their lives for one another and for the salvation of the world.

To remind us how challenging it is to share this communion of life with Jesus, Luke tells us that at the very table of the Last Supper the disciples got into an argument about who was the greatest. In response, Luke quotes Jesus as teaching in words what John portrays in gesture when Jesus washed the feet of his disciples: “I am among you as one who serves.”

That becomes the key to interpreting everything we hear in today’s Gospels, from Jesus’ humble and peaceable entry into Jerusalem through his last prayer for others, “Father, forgive them, they know not what they do.”

This week invites us to embark on a retreat with the whole church. Today, we process into Jerusalem and preview the Passion story. Monday, we remember how Mary of Bethany anointed Jesus as messiah before he suffered. Tuesday, we witness Jesus’ anguish about being betrayed and abandoned by his disciples. On Wednesday, we watch as Judas conspires with those who reject Jesus words and deeds. On Thursday, we begin the three-day liturgy that begins with the invitation to communion, passes through despair and ends with the mystery of living in God’s invincible love.

When we begin this annual liturgical retreat, we do not know which element of the mystery will captivate us. We cannot plan to do more than pay attention and be willing to find ourselves in the position of various ones of the actors in the drama.

This week, we remember that the implication of the Incarnation is that God assumed the apparent powerlessness of suffering to that we might participate in divine life and the power of undying love.

This story appeared in the April 1-14, 2022 print issue under the headline: Power of undying love .