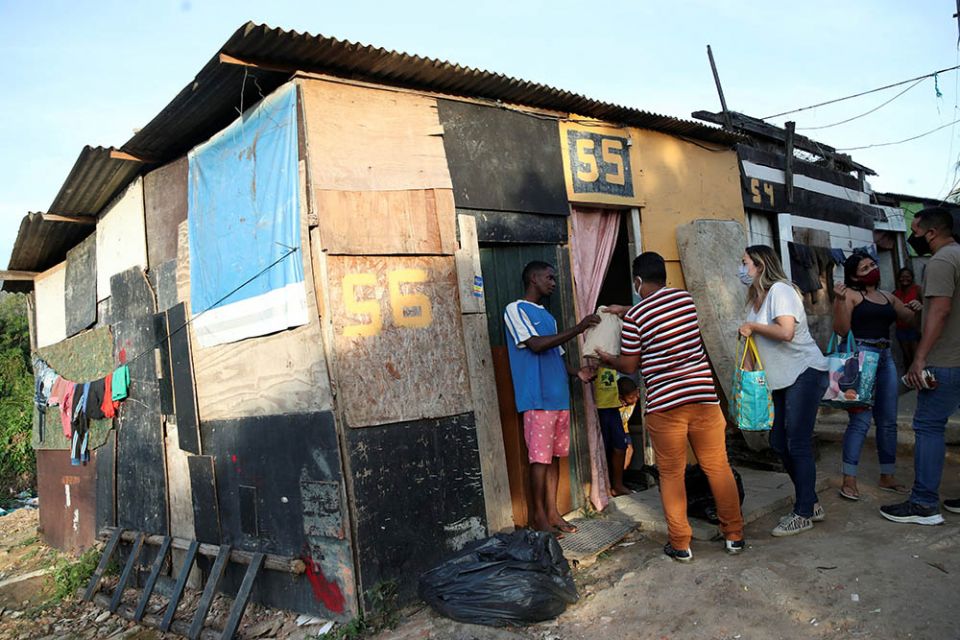 Residents in a poor section of Rio de Janeiro receive food and bread produced at the Sanctuary of Our Lady of Fatima during the COVID-19 pandemic. Volunteers delivered the bread June 24. (CNS/Reuters/Ricardo Moraes)

In the first year of the French Revolution, Benjamin Franklin wrote to his friend Jean-Baptiste Le Roy, a French scientist, saying: "Our new Constitution is now established, everything seems to promise it will be durable; but, in this world, nothing is certain except death and taxes." Was the comment one of Franklin's pragmatic witticisms? A friendly science-skeptical jab at the son of a clockmaker who had published in the newest French encyclopedia? Or did the remark betray a conviction that little in life can be proven, and even that little assures nothing more than mortality preceded by debt?

Had Paul of Tarsus run into Franklin at a pub, they would have surely enjoyed a hearty and entertaining debate. Paul, no less than Franklin, knew how to turn a phrase. And Paul, unlike Franklin, had undergone a religious experience that convinced him that Christ was the Son of God and the revelation of humankind's future. Franklin paid his taxes. Paul told his disciples that they owed nothing more than love to others. While Franklin accepted the inevitability of dying, Paul reveled in how the Resurrection exposes the utter powerlessness of death. The thought worlds the two men inhabited were far more distant than the 1,700 years or 5,500 miles that came between them.

Today's readings illustrate what might seem to be a similar contrast between Jeremiah and Jesus. Jeremiah, so gloomy that his name became synonymous with bitter laments, tells us to trust nobody who comes in flesh and blood. Jesus takes a different tack — not exactly the opposite, but what Pope Francis might call a "contraposition," a way of thinking in which people allow what seem to be contradictory visions to stretch and broaden their point of view.

Jesus looks at the world and its fickle, fallible people, and rather than say, "Trust no one," he affirms those who take an uncommon approach to life. Fully aware that he may be speaking in riddles, he says, "Blessed are you who are poor, hungry, weeping and hated." Speaking (then and now) to a humanity that tends to equate good fortune with God's blessing, Jesus draws the map to happiness by a different route. His description of blessed happiness reorients our imagination.

At their core, the beatitude-contrasts Jesus presented illustrate the distinction between ill-begotten assumptions about self-sufficiency and an embrace of our need for others. Jesus' "Beatitudes" describe the happiness that can be known only by people who so prize the common good that they are scandalized by poverty and indifference. Such people understand that we human beings need each other so much that the only wealth that matters in the long run is the richness of loving relationships. They are convinced that when even one person goes hungry, our very humanity suffers malnourishment.

The people Jesus describes as genuinely happy are those who know the solidarity of weeping with others. While they may be mocked and mistreated, that sort of misery counts for little compared to the peace of living with integrity or the living witness that goodness is possible, no matter what. For such people, poverty creates blessed interdependence, hunger is a call to action, weeping together creates community, and persecution is a sign that your community is succeeding in being a real threat to the powers of evil.

Jeremiah warned his readers to trust no living person, but to put their trust in God. Jesus proclaimed his contraposition, explaining that we can encounter the reign of God, God's active presence among us, in a community of flesh and blood people. Not only that, but we are invited to be those people in our moment of history.

Both Matthew and Luke record Jesus' Beatitudes, adjusting their precise wording to their communities. Luke's community was probably diverse in social, economic and perhaps ethnic background. Luke, like Paul, saw the coexistence of genuine wealth and true poverty in a Christian community as a scandal. Therefore, rather than speak of poverty "of spirit," he emphasizes material poverty as a condition of blessedness that calls forth the dynamics of the reign of God and warns that passivity in the face of others' needs leads to everlasting woe.

Today's readings invite us to take a leap of faith and believe in the paradox of the Beatitudes. Jesus' vision offers a contraposition to Franklin's certainty about death and a reassessment of our shared life. Jesus is God's expression of full solidarity with humanity. Every word Jesus spoke and every deed he performed invites humanity to share in the blessedness of the divine community called the reign of God. As Elizabeth said to Mary in the Gospel's first beatitude, blessed are those who believe.

This story appeared in the Feb 4-17, 2022 print issue under the headline: Jesus' contraposition .