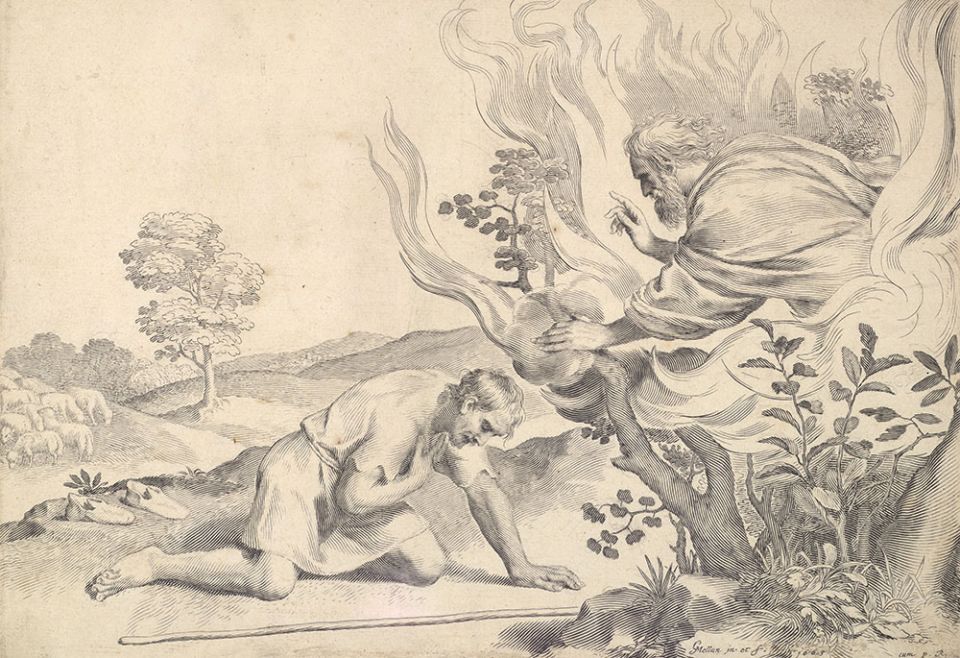 "Moses Before the Burning Bush" by Claude Mellan, a 1663 engraving (Metropolitan Museum of Art)

What is God like? Today's psalm tells us that "The Lord is kind and merciful." Other psalms add descriptions of God as a rock, warrior, eagle, sun, king, shield, judge, light, shepherd, etc. If we put our minds to it, we could cull our scriptures and come up with a litany like the Asma ul Husna, the Muslim chant that praises 99 of God's beautiful names, including the beneficent, the merciful, the supreme, the evolver and the creator.

With all you've been taught, do you ever wonder if your god is too small? This phrase is the title of a 1953 book by Episcopalian theologian J.B. Phillips. Phillips believed that ideas about God had grown static and all but meaningless to the contemporary world. While Phillips rocked his theological world in ways similar to what the Second Vatican Council would do a decade later, he was hardly the first to try to shake people out of their theological miniaturization of God, especially the God known through the Judeo-Christian tradition.

Much of the Gospel presents Jesus trying to shake people out of their deficient yet unwavering ideas about God. In today's scene, some people came to Jesus with a dilemma about God's justice. They were trying to make sense of two experiences of death. In one case, Pilate martyred people while they were offering sacrifice. The people concluded that those worshippers were either punished for secret sins or that evil was winning over God.

In the second case, a tower fell and crushed 18 random victims, leaving the amateur theologians wondering if those people deserved death, or if life ultimately has no rhyme or reason. The essence of their questions was whether or not God can be counted on to reward the good and punish evil. If not, was life simply absurd?

Jesus didn't defend God. He said that the dead were no guiltier than the living. Then he said that the living needed metanoia-conversion, a thorough change of mind and heart and vision. With that, he launched into a parable about a landowner, a gardener and a barren fig tree. The owner who wanted his land to produce to its full potential told the gardener to destroy the sterile tree. The gardener, who apparently understood the life cycle of figs and the power of dung, asked for one more year during which he would "cultivate the ground and fertilize it."

There's a tendency to interpret this parable by thinking of God as the owner and Jesus as the gardener/savior who wants to offer a last-ditch opportunity for the indolent tree. That interpretation, seeing Jesus as God's final offer, fits a theology of a just but merciful God, a respectable, predictable deity, a God who fits within human expectations.

Why do we think that Jesus was operating out of that theology? When we reflect a bit more, we remember that Jesus came from the tradition of Moses, the one who encountered the God of the burning bush. The God of the burning bush revealed a name that no one knows how to translate and many consider too sacred to pronounce. Rather than fitting nicely into human systems and theologies, this God comes to free slaves and shake up the unproductive.

Lutheran theologian Rudolf Otto described the experience of God as mysterium tremendum et fascinans. The God of the burning bush is a mystery: always beyond our comprehension, always more than any description we might give and never circumscribed by anyone's theology or hundreds of names.

This God is, in the easily deciphered Latin, tremendum: greater than all of creation, overpoweringly awesome. Tremendum calls forth the response called "fear of the Lord." That is not a cowering emotion, but a feeling of being so overwhelmed that one is moved to adoration, simultaneously realizing that even the greatest act of worship falls short of being an adequate response.

Finally, this God is fascinans. While mystery and awe emphasize the distinction between us and God, fascinans describes the irresistible attraction we feel for God. God attracts people like a lover, inspiring an unending desire to be near and to know more.

Today's readings offer us an invitation to break open our biggest ideas about God. Moses tells us that God, the mysterium tremendum, is a fire that burns without destroying.

Jesus suggests that God is not only fascinans, endlessly attractive, but also endlessly attracted by us. Jesus talks about the God who wants to shake us out of our lethargy, who wants us to go embrace the metanoia-conversion that opens us to believe in God's love so deeply that we replicate it in our own relationships. Then our productivity will not simply be works or good fruit, but we ourselves will continuously become new and diverse images of the God beyond all names.

A version of this story appeared in the March 4-17, 2022 print issue under the headline: Rethink ideas about God .

Brace yourself: Here is the secret of happiness

Blessed are the merciful — for our sakes