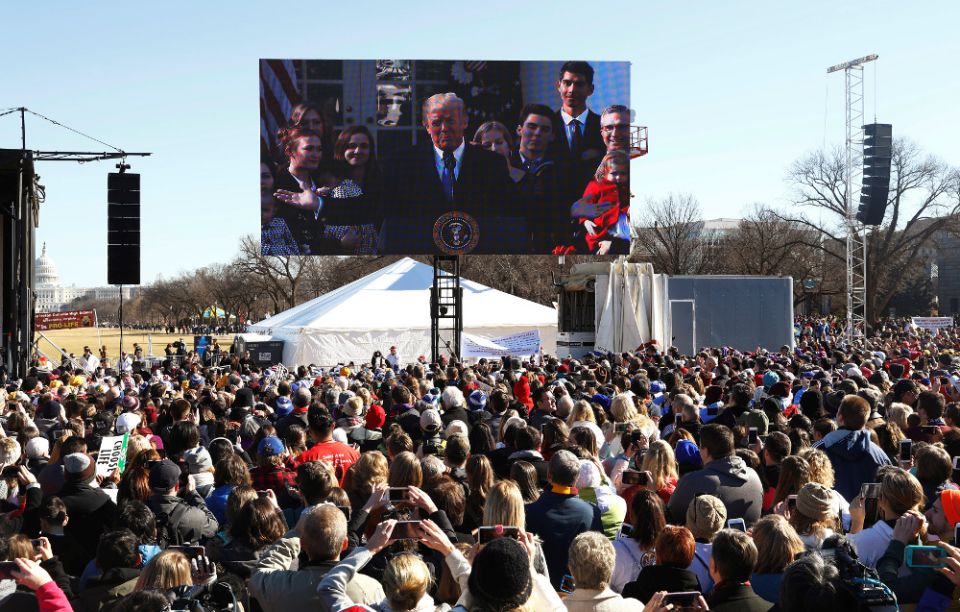 President Donald Trump is projected on a large video screen as he addresses attendees of the annual March for Life rally in Washington Jan. 19. The address took place from the Rose Garden at the White House. (CNS/Eric Thayer, Reuters)

The Department of Health and Human Services announced that its Office of Civil Rights now has a division whose job is to protect the conscience rights of healthcare workers and hospitals that refuse to perform certain procedures, such as abortions, euthanasia, or sex-change surgery.

The announcement was welcomed by pro-life groups and denounced by Planned Parenthood and the ACLU, who said it would allow discrimination against women and LGBTQ persons. The announcement was made on Thursday (Jan. 18), a day before the annual March for Life in Washington.

"Laws protecting religious freedom and conscience rights are just empty words on paper if they aren’t enforced," explained OCR Director Roger Severino. "No one should be forced to choose between helping sick people and living by one’s deepest moral or religious convictions, and the new division will help guarantee that victims of unlawful discrimination find justice. For too long, governments big and small have treated conscience claims with hostility instead of protection, but change is coming and it begins here and now."

No new laws or policies were proposed, rather the office will be responsible for enforcing current law. What is unclear is how the new division will interpret the law. HHS is drafting rules to clarify the circumstances in which health care workers could refuse to provide services to which they had religious or moral objections.

"The conscience of Catholic health care does not allow us to participate in certain procedures we feel are an assault on the dignity of human life, such as abortion and euthanasia," the Catholic Health Association declared in a press release following the announcement. "That same conscience compels us to love and respect others who feel differently."

Supporters of the announcement cite the 2009 case of Cathy Cenzon-DeCarlo, a nurse at Mount Sinai Hospital in New York City, who was forced to assist in a second-term abortion or face disciplinary action. Although she lost her case in court, the hospital eventually changed its policies in 2013 so that employees would no longer be forced to assist in abortions against their will.

How common are these problems? Severino says that since the 2016 election, his office has received 34 complaints, up from only 10 complaints between 2008 and October 2016. This increase may be due to people having more confidence their complaints will be positively received by the new administration. With the announcement of the new office, the number of complaints will undoubtedly increase.

Opponents, on the other hand, cite the case of a Michigan pediatrician, Vesna Roi, who refused to care for the child of a lesbian couple. They also fear that pharmacists may refuse to fill prescriptions for contraceptives that they consider abortifacients.

NPR even speculated on the possibility that a transgender person could be turned away from the emergency room of a Catholic hospital.

In its press release, the Catholic Health Association dissociated itself with those who would deny services to certain categories of people. "While there are certain procedures we do not do in our hospitals, there is no one who is not welcome for the care that we do provide in our hospitals," it said.

When HHS does get around to writing its rules, it would do well to listen to CHA in developing rules that protect individual consciences but do not discriminate.

Many issues are clear. Abortion, euthanasia, in vitro fertilization, and sex change surgery are not emergency procedures. People have plenty of time to find medical personnel who are willing to perform these procedures without forcing others to violate their moral or religious views. On the other hand, if a hospital or healthcare worker provides these services, they must provide them to anyone without discrimination.

There are other issues that are more complicated, but can be worked out through thoughtful discussion, which sadly is not what most activists want. They prefer acrimonious controversy, shrill accusations, and exaggerated claims. Better to leave these issues to medical ethics boards than to politicized interest groups.

In its press release, the Catholic Health Association affirmed that "Conscience is one area that is sacred to all Americans," but added, "It is best protected by promoting respect and dialogue especially in a pluralistic society." Amen.