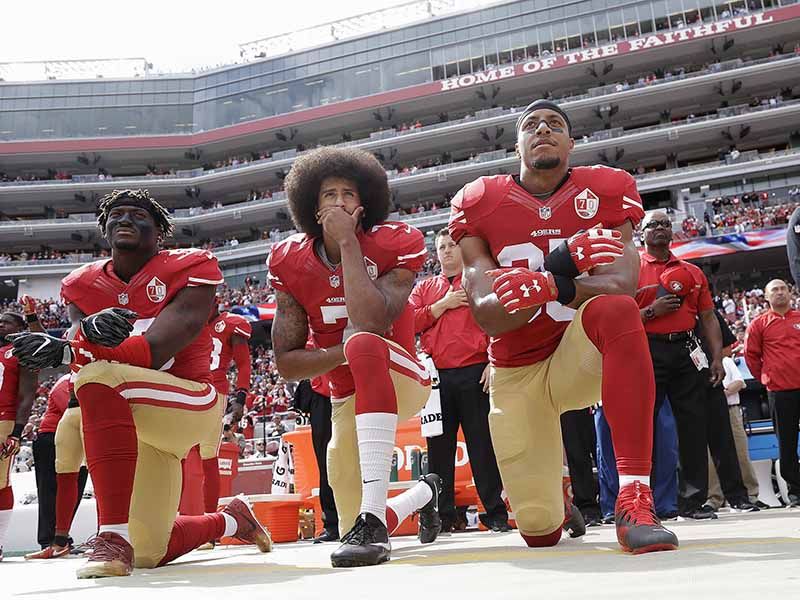 From a Catholic perspective, the controversy over kneeling during the national anthem is strange. Many people, like President Donald Trump, are criticizing players for kneeling because they say it shows disrespect. For Catholics, however, kneeling during liturgy is a sign of respect. In fact, kneeling before the American flag might be considered idolatrous.

Catholics have had their own controversies over kneeling. If you visit Catholic churches in Europe, you will discover that many, if not most of them, do not have kneelers. Congregants are expected to stand or sit during Mass. The Roman Missal as issued by the Vatican actually calls for the assembly to stand during the Eucharistic prayer, except for briefly kneeling during the institutional narrative or consecration.

Standing while praying actually follows the Jewish tradition, where people stood while praying in the temple. Kneeling was seen as an expression of penitence.

In AD 325, the Council of Nicaea, which is responsible for the Nicene Creed recited at Mass, actually forbade kneeling during the Easter season, which is a time for rejoicing, not penance. Symbolically, the community stands with the risen Christ. Worshippers stand while they await his return.

In the United States, Catholic congregations kneel during the Eucharistic prayer because the American bishops requested an exception from Rome. The bishops argued that American Catholics preferred to kneel and that they would be scandalized by standing. Liturgists objected and lost, although in some progressive Catholic parishes, we see congregants standing.

The meaning of new symbols and symbolic gestures can be confusing, whether in Catholic liturgy or in the liturgy surrounding football games. What is clear from the experience of the NFL and the Catholic Church is that symbolic gestures mean different things to different people. If you go into a bar and hold up two fingers, are you ordering two beers, asking for a table for two or giving the peace sign to friends?

Linguists distinguish between signs and symbols. Signs (like a stop sign) have a single meaning that is clear to everyone. Symbols can have multiple meanings that are culturally determined. Meaning is not always obvious; it has to be learned. 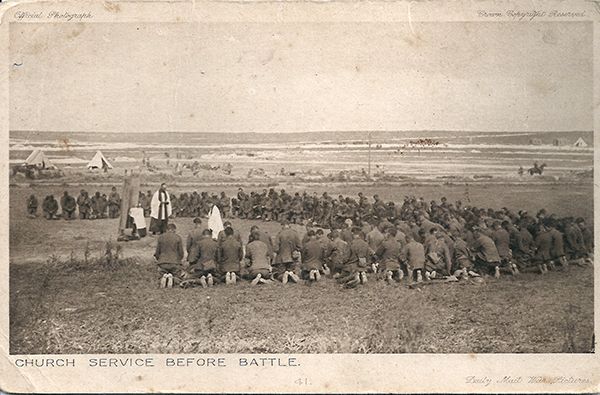 “Church Service Before Battle” depicts a group of World War I-era soldiers kneeling to pray at a church service before going into battle. (RNS/Courtesy of Julie Maria Peace)

Symbols can have exactly the opposite meaning to different people. Wearing a skullcap in a synagogue is seen as a sign of respect, but for a man to wear a hat in a Catholic Church would be considered disrespectful unless he is a bishop in a miter.

Symbols often need to be interpreted to those who see them for the first time. It should not be surprising that they are often misinterpreted.

Who decides what a symbol means? In a hierarchical organization like the Catholic Church, the clergy attempts to control meaning, although not always successfully. Trump seems to think that he is the pope of the NFL — only he determines what symbols mean.

Theoretically, the artist or community that creates a symbol should be the one who determines its meaning, but the creator must also be sensitive to the wider world that will see the symbol.

Standing during the Eucharistic prayer is not disrespectful, but a congregation may need to be educated if its members have knelt all their lives. The meaning of standing needs to be explained.

In the case of the NFL, those kneeling should be allowed to explain their symbolic action. If they say it is a protest against racial injustice and not an attack on the flag, their interpretation should be respected. They are the authors of their action and have a unique right and obligation to explain it. Challenging their interpretation of their actions is arrogant and demeaning. To tell them they cannot express and explain their views is to cut off their freedom of expression.

But the ultimate test of a symbol is whether the creator’s interpretation is accepted by the larger community. As more people support those who kneel and as kneeling spreads from the NFL to high schools, it looks like the kneelers are winning.

Symbols can also be a rich topic of conversation and dialogue. Last year, at St. Ignatius College Prep in San Francisco, where my brother is president, three players wanted to kneel during the national anthem. My brother's only condition was that they talk it over with their teammates first. The players were also given an opportunity to explain their actions to the student body in a school assembly and through a video.

"The conversation and dialogue we had went better than I expected," explained Joe Lofton, one of the kneeling players, to the National Catholic Reporter. "The best part about it was that people were comfortable enough to share how they felt about it."

One player spoke passionately in defense of America, which had saved the lives of the player's family by welcoming them as refugees. The discussion brought the team closer together, and when the players knelt, their teammates stood behind them, some kneeling, some standing, with their hands on their shoulders.

My brother took a lot of flak from people who wanted him to expel the students, just as the NFL is getting flak from Trump, who wants the players fired.

Would that adults could be as mature as high school students. 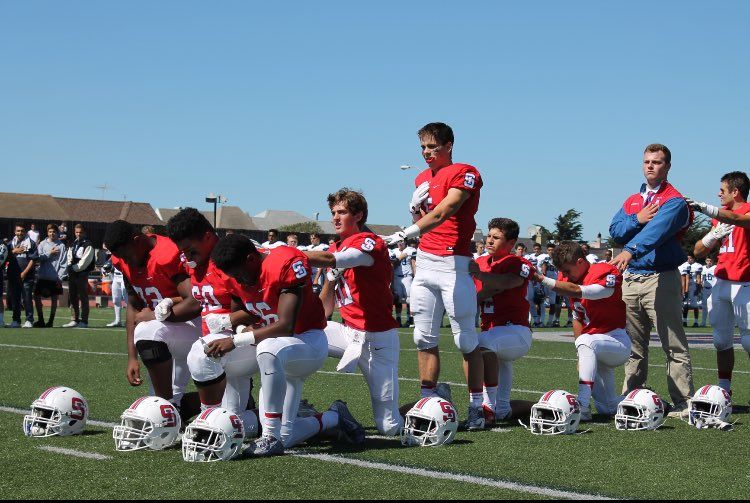 Three football players from St. Ignatius College Prep in San Francisco, who chose to kneel during the National Anthem, are supported by their teammates, some of whom knelt while others stood. The adult behind the three students is the coach of the opposing team, Bellarmine Prep of San Jose, who joined the students when he saw them kneeling. (Photo by Leya Elias, SI class of 2017, now at Stanford University)
A version of this story appeared in the Oct 20-Nov 2, 2017 print issue.