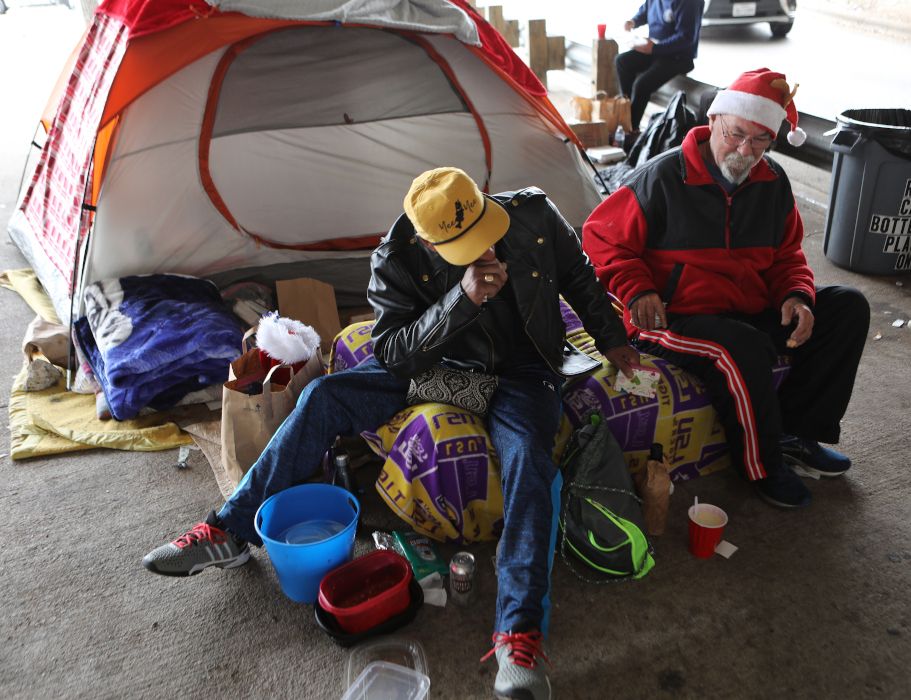 Homeless men are seen under a bridge on Christmas day in Austin, Texas. (CNS/Bob Roller)

One of the challenges of preachers in Catholic churches and many Protestant churches is that they must preach each Sunday on the Scripture readings in the Common Lectionary rather than simply use their favorite passages of the Bible. This protects congregations from hearing the same homilies over and over again. It also keeps preachers honest by confronting them with a full spectrum of Scripture readings.

I had to wonder what conservative preachers did with last Sunday’s reading from the Prophet Isaiah. In the comment section below or on Twitter (@ThomasReeseSJ), let me know what you heard last Sunday.

Many people think of prophets as fortunetellers who predict the future. In reality, they are much more like social critics or op-ed writers. They challenge political and religious leaders and their people to do what God wants them to do. They frequently attack political and economic elites for not taking care of the poor. They even criticize foreign entanglements and wars. And they frequently do it with harsh words.

Isaiah spoke in this tradition. In last Sunday's reading (the Book of Isaiah's 58th chapter, verses 7-10), he has the Lord telling the people and their leaders, "Share your bread with the hungry, shelter the oppressed and the homeless; clothe the naked ... ."

We were also less welcoming to the "oppressed." The U.S. plans to admit only 18,000 refugees during fiscal year 2020, the lowest number since 1980, when Congress enacted the program. Meanwhile, there are an estimated 70.8 million refugees in the world, and the number keeps increasing.

Nor is the homeless situation any better. More than 550,000 Americans experience homelessness on a typical night, and 1.4 million will spend some time in a shelter in a given year. The situation around the world is even worse.

The teaching of the prophets and the gospels is summed up for Christians in the seven corporal works of mercy: Feed the hungry, give drink to the thirsty, clothe the naked, shelter the homeless, visit the sick, visit the imprisoned and bury the dead.

Many preachers focus on these as individual or church responsibilities. That is true, for "They will know that you are Christians by your love."

But the prophets also spoke to political leaders. Taking care of the hungry, the homeless, the oppressed, is not just an individual mandate, it is a civic responsibility. The prophets threatened dire consequences to the nation if it failed in its responsibility. The marketplace cannot solve all problems. There is a legitimate role for government in caring for the poor and marginalized. The U.S. Catholic bishops’ document "Forming Consciences for Faithful Citizenship" and the videos that accompany it lay out this teaching for this election year.

Preachers of the prosperity gospel promise individual success if one prays and donates to the church. The prophets tell us to not worry about ourselves but to take care of those in need. St. Paul warned the Corinthians about eloquent preachers who were undermining his work.

Rather we should listen to Jesus, who said, "your light must shine before others, that they may see your good deeds and glorify your heavenly Father."

Why doesn't poverty play a bigger role in US politics?