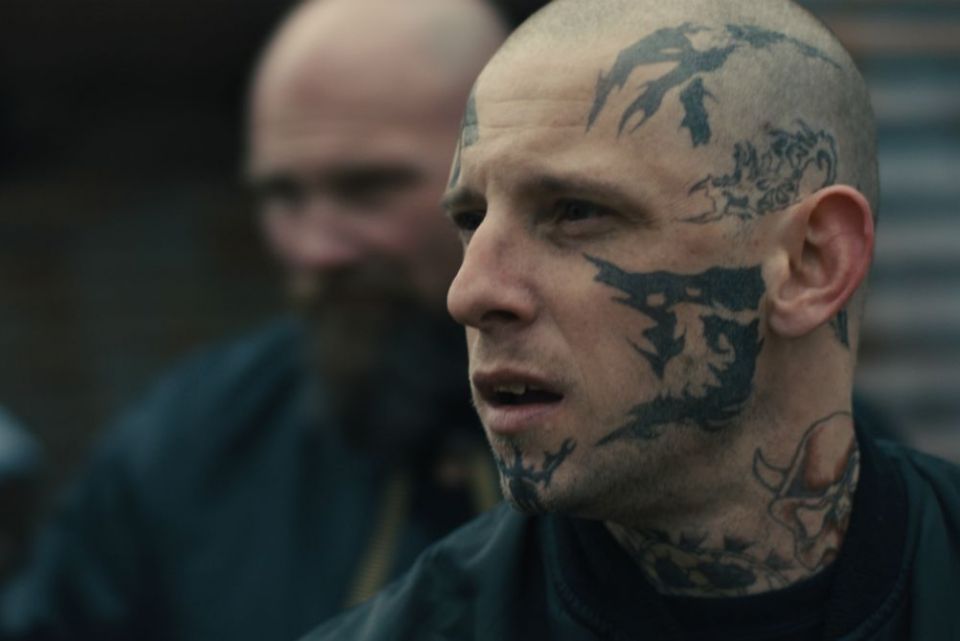 Jamie Bell as Bryon Widner in "Skin" (Courtesy of A24)

There is an awful lot of racism, white supremacy and nationalism in our culture this summer. I'm watching Showtime's limited series "The Loudest Voice" about Fox Television founder Roger Ailes and seeing how much his ideology influenced racial identity in politics, intentionally polarized the audience and turned the news into entertainment. Almost daily, television news recounts how the president uses racism to make points with his base, meanwhile debasing himself and everyone who hears him speak.

Now, in a film from Oscar-winning Israeli director Guy Nattiv comes the story of Bryon Widner (Jamie Bell) a former neo-Nazi skinhead, "Skin." Nattiv read a photo essay about Widner's tattoo removal while in Israel. As the grandson of Holocaust survivors, he had heard their survival stories and knew he wanted to tell Widner's story of redemption, how Widner's conscience begins to bother him and he makes a painful journey from hatred to hope with the help of an anti-fascist activist Daryle Jenkins (Mike Colter) who helps cult members remove their tattoos and exit "the life" to begin anew.

The film opens with a teen boy getting his head shaved. It's young Widner, whose dysfunctional family life made him a ready target for Fred "Hammer" Krager (Bill Camp) and his wife Shareen or "Ma" (Vera Farmiga). They bring him into their "family" of misfit boys that grows into the hate-fueled Vinlanders Social Club. Widner's face and body are soon covered with tattoos, and he becomes an accomplished tattoo designer and artist himself, running a shop for the Vinlanders. "Blood" and "Honor" are tattooed on his chest. New members go through disgusting initiation rites.

In 2009, the white-power Vinlanders and a group of anti-racist protesters clash on a bridge in Columbus, Ohio. It is the first time Bryon Widner (aka "Babs" by the gang) meets Jenkins. They begin shouting at each other and a fight breaks out. Widner and another skinhead follow a black man down an alley and slash his face. Widner is arrested and released, but the FBI is watching.

At one of the white-power gatherings a single mother, Julie Price (Danielle Macdonald), and her three young daughters arrive to play their ukuleles and sing because they need the money. Widner is drawn to Julie and the girls, but there have been too many men in their lives already and they are cautious. Eventually Widner and Price become close, and they all move in together. Krager is not happy about this and neither is Ma, who seems to have the most power in the organization. She's downright creepy as the key recruiter of lost boys, offering food, clothing and a military-like "family." Meanwhile, after some time passes, Widner and Price marry. They move to Indiana, but the gang finds them.

Danielle Macdonald and Jamie Bell in "Skin" (Courtesy of A24)

Krager suspects that Widner married without his approval and he tests his resolve. Widner is trapped. He and a newer recruit named Gavin (Russell Posner) and others are sent to burn down a mosque and kill anyone who might be there. When Widner opens a door to a room and finds men huddled together in fear, he tells them to run thereby saving their lives. Gavin witness it and tells Krager. From that moment on, Krager and his skinheads make life hell for Widner and his new family. Bryon, already on the FBI's wanted list, contacts Daryle Jenkins for help.

"Skin" is not an easy film to watch. The narrative, which is inspired by this true story, is framed by sessions to remove tattoos from Widner's body, an extremely painful process that took many hours over almost two years to complete. Bell had to bulk up, gain weight and work out to play a role he never imagined would come his way. He told me in a phone interview that playing a white supremist neo-Nazi is the antithesis of who he is as a person, "and I wonder why they thought of me for the role." Probably because he is such a good actor who knows how to get into the skin of a character, so to speak. He met with the real Bryon Widner and got to know him and his story before filming began. Bell found the role challenging internally and physically. "Even to have to think about embodying someone like this was very unpleasant and icky" for the six weeks of the shoot.

I asked him if the tattoos were henna or if they had to be put on every day. He explained that they were very expensive high grade "transfers," and when the production budget ran out, he had to leave the tattoos on. I asked what it was like out in public, if people reacted to him. He said that they didn't; even getting a breakfast sandwich in the morning, the server wouldn't look him in the eye. He felt very isolated and imagined that this is what Widner and others like him want — to be feared, to intimidate people and to be left alone to do what they want. He said the topic of white supremacy itself is a monster in the living room that people ignore rather than talk about. It was like that in public, too. People saw him as a monster and ignored him.

He described working with Australian actor Macdonald as effortless because she is such a natural talent. And she could be very fierce in her role as a mother wanting to give her daughters a better life than she had but making bad choices, too. Together Bell and Macdonald had to grapple with the characters' irrational impulses.

"We discovered that we could not approach these characters — the gang and the ones we were portraying — from a place of rationality because these people were not rational. They were constantly grappling with their environment, the company they kept even as Bryon tries to change and Julie to put her children first. Bryon and Julie were there for each other, but the relationship was intense amidst much violence."

I asked Bell what kind of social influence he hoped the film would have. He said:

I hope this is an urgent wake up call, a call to come to conversation, to see those who dedicate their lives to violence. To give them the chance to take off their skin on the surface and see if they can they change. How far can we go to forgive?

This is also about the kindness of strangers; one woman made an anonymous donation of thousands of dollars to remove Bryon's ink. Daryle is constantly extending his hand of kindness to others. Race-inspired violence is something that cannot be ignored; white nationalism inflicts suffering on people's lives and we need to shine a light on it. We cannot ignore the danger of this monster of racial bias and prejudice like the people who ignored me. The film takes an unflinching look at white nationalism and the consequences of not addressing it and what happens when you do. I hope the film will shine a light.

"Skin" is a small, powerful, raw well-acted film that gives a close-up look at people who believe they have been left behind by society, that they have some kind of righteous claim to superiority, and a look as well as their leaders who exploit them. The beauty in this very dark film is reflected by the innocent children, the heartbroken mothers weeping for their children beaten by white supremacists simply because they are black, and the generosity of strangers. The benefits of being the leaders of such a "family," or part of it, are not clear beyond giving a faux sense of belonging and using power through violence, sex and drugs to control members rather than anything resembling authentic love for one's fellow human beings. The awakening of Widner's conscience, the goodness of others and Julie's love are what ultimately save him.

"Skin" shows that there are no good people on the side of white nationalism. But it also shows that people can change for the good, that grace and hope abound when people care and offer to help.

"Erasing Hate," an MSNBC documentary about Bryon Widner, aired in 2011 as "A skinhead's story of redemption." The feature film "Skin" opens in theaters and is available as video-on-demand July 26.