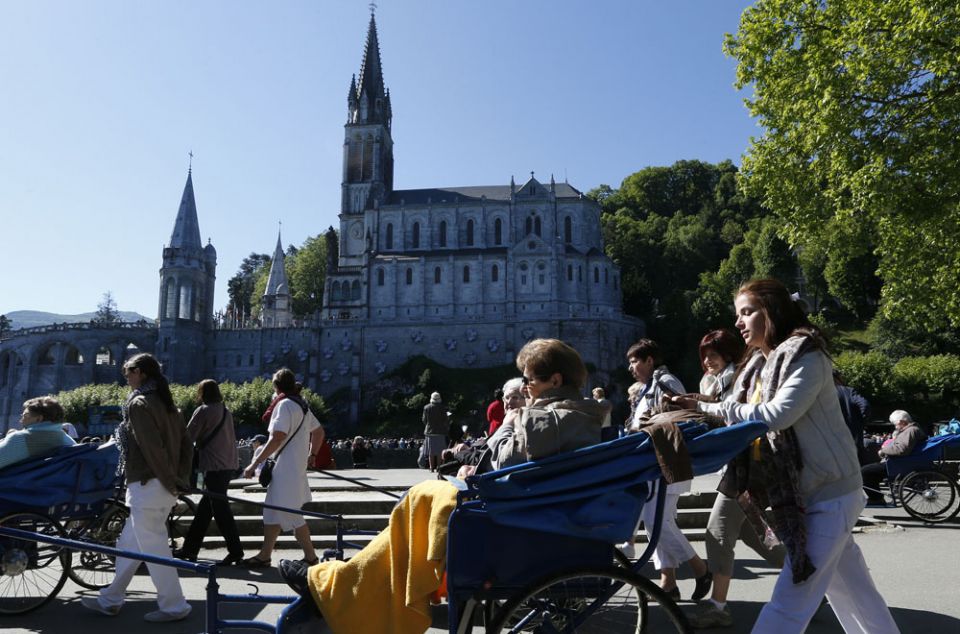 Caregivers push pilgrims in wheelchairs at the Shrine of Our Lady of Lourdes in France, 2014. (CNS/Paul Haring)

For many years, a wild idea scrambled around in my head like a squirrel living in an attic. I had a desire to seek out God's presence in God's sanctuaries around the world. I knew the famous quote from St. Augustine, "The world is a book and those who do not travel read only one page." I thought to myself, "God must be over there, too." And so I went.

I didn't choose to walk the rugged 68-mile Camino toward the Shrine of Santiago de Compostela where thousands of pilgrims have felt the breath of God in the warm breezes of northern Spain.

Nor did I go on a luxury cruise to sites where St. Paul once preached or take a five-star trip to Jerusalem to observe the site of the crucifixion in total comfort.

I wanted to follow the example of the squirrel that runs around everywhere and finds a home in the trunks of trees as well as its tallest branches, in forests and parks and cities and sure, suburban attics. So I set out to experience church by visiting 365 diverse churches throughout the world in 365 days.

Friends said I could have just flown to Rome, eaten a lot of pasta and found 365 churches to visit there. I wasn't against going to Rome, but I knew the Spirit doesn't blow only in museums of Christendom.

As if foreshadowing the sentiments of Pope Francis, I knew that the church lived in field hospitals of hope scattered throughout the world. I would try to find churches in the richest and in the most average, and more often, the poorest lands where Christianity has spread. I might even follow the pope's lead and stop in a mosque or synagogue along the way.

It was the year 2007. My journey took me through 38 countries on five continents in one year. It is a treasure that only now do I appreciate. A little older, I can savor the significance of walking in the footsteps where Jesus lived and also in the footsteps of the Jews in the concentration camps of World War II. My heart is still moved by the healings at the Shrine of Our Lady of Lourdes in France and the prayer meetings in Dakar, Senegal, for those facing death after a diagnosis of HIV/AIDS. 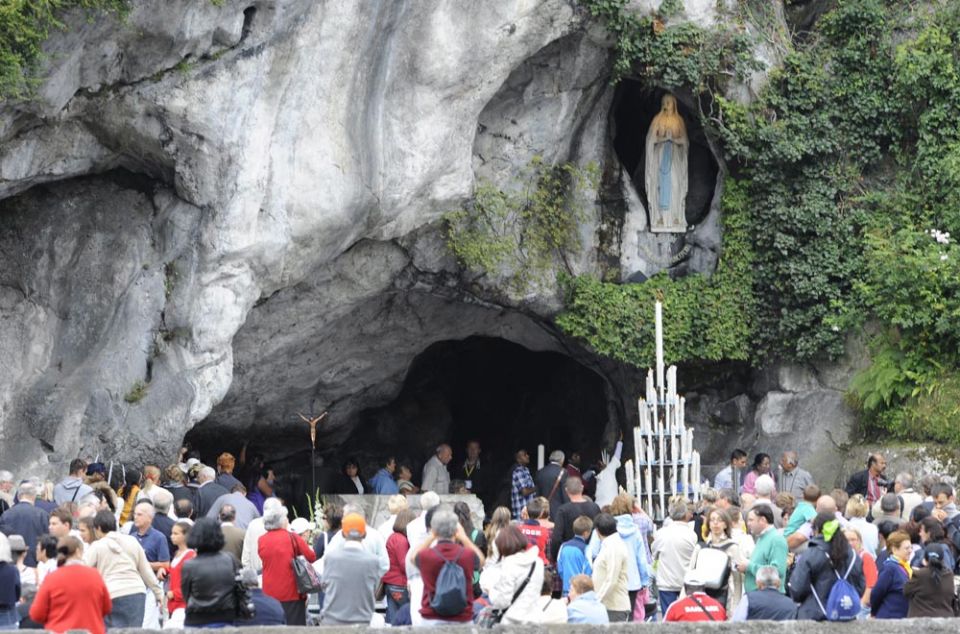 Once, outside a Syro-Malabar Catholic parish in Bangalore, India, I paused to meditate in the prayer garden as a lotus flower bloomed in the sunlight on a sparkling pond. I began to wonder if "enlightenment" was limited to the stories of Eastern religion.

Slowly touching the words of the Hail Mary with my lips, I looked up to see an image of Mary adored in an Indian sari with a halo and a bindi. In the exhale of the prayer's breath, I contemplated that such distinction is only a diversion.

A few weeks later, I found myself in the Church of the Holy Sepulcher in the Holy Land and in a whimsical pause I realized that for much of my life, I grew up around Catholics who thought the "Holy Land" was Ireland.

A few months later, I was in a landscape that resembled thousands of photos of Ireland with amazing detail but it was actually Oaxaca, Mexico. I went with a missionary priest to the church he served on a misty hill in a village where people sang in the streets their novena to Nuestra Señora de Guadalupe. It was no surprise to me that I felt the same sacredness there as in the tomb of Christ. 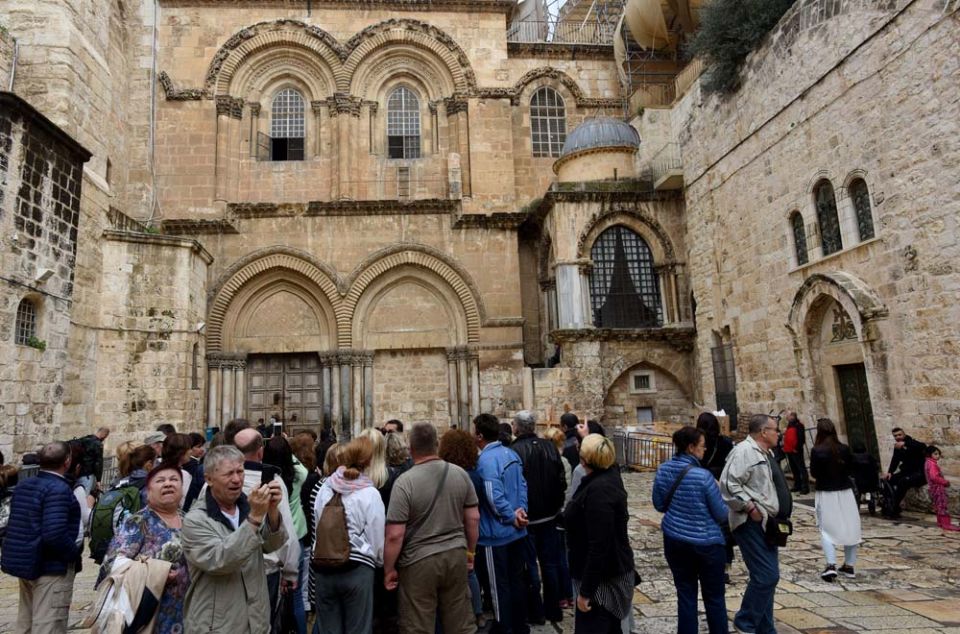 Tourists stand outside the Church of the Holy Sepulcher Feb. 26 in Jerusalem's Old City. (CNS/Debbie Hill)

People ask me if God was in the cathedral walls of St. Peter's Basilica in Rome and I nod, surely. Beautiful. Breathtaking.

But as I savor the memory of St. Peter's in Rome, my mind jumps to St. Peter's church in the outer districts of Meru, Kenya. It is a little hut built with cow dung. If you want to hear music that will stir your soul and leave you changed, go there.

Some of the churchgoers had walked 3 miles from their homes to be there on the scorching and humid Tuesday afternoon that I visited. It was the only Mass they could attend that week. Their main parish is 15 miles away, and there are no means of transportation in the rainy season.

They sing — wow, do they sing! They sing, and God is alive, and I am awake. In wondrous, soul-searching smiles, they ask me, "Is God over there? In America?"

In that moment, I am trapped, seeing my soul's quest for the beyond in those I had sought out. I traveled across the ocean only to find the question that began my quest echoed back. I nod with serene resignation to the truth about God that I did not discover but that found me.

"Yes. God is there. And God is here. God is truly everywhere!"

God's most holy sanctuary is everywhere we go and everywhere we are. Perhaps Augustine got that part wrong. If you are given only one page of the world to read, but that singular page reveals to you the love of God, then that page is enough.

If you share my condition of perpetual curiosity, I cannot object. It is amazing to experience God "over there," in holy sanctuaries enshrouded with mystery.

But when you find God there, your most blessed realization will be that God has been with you all along and remains with you when you return, in the blessed sanctuary called home.

[David Heimann is the pastoral associate for St. Andrew Parish in Chicago. He has worked in the catechesis and evangelization of children, youth and adults for 19 years. You can read all of the Soul Seeing columns at NCRonline.org/blogs/soul-seeing.]

Sexual abuse by monks covered up at schools in England, inquiry finds