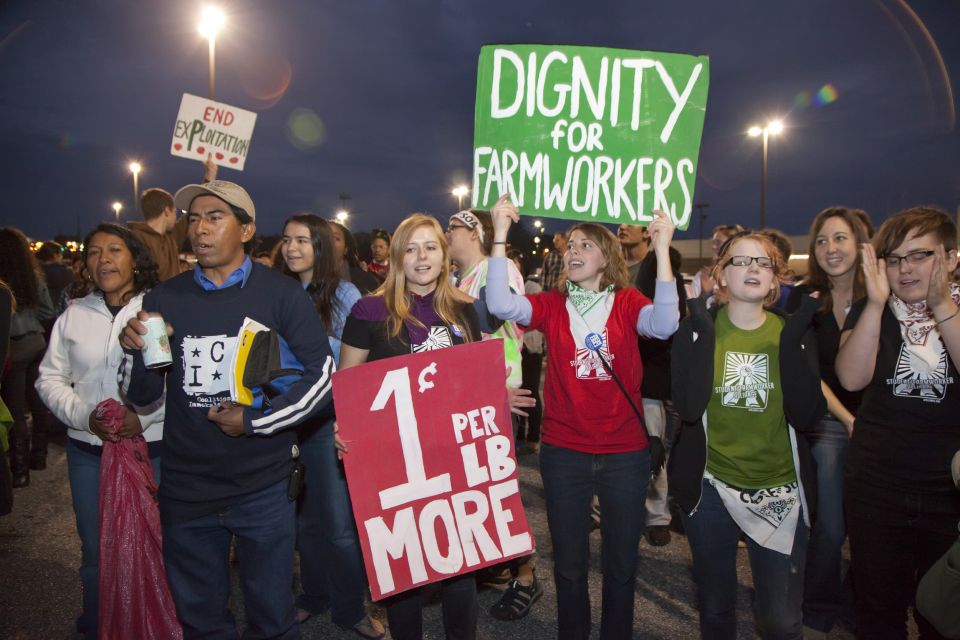 Members of the Coalition of Immokalee Workers and supporters picket a Publix supermarket in Columbus, Ga., in a Nov. 21, 2009, file photo. They urged the store chain to pay one cent more per pound for tomatoes they buy so wages would be higher for low-paid immigrants who pick the tomatoes. (CNS/Jim West)

For most of us living in the Northern Hemisphere, fresh fruits and vegetables are now in abundant summer supply for our sustenance and enjoyment.

But how often do we really consider the hard work and long hours that farmers, ranchers and farmworkers exert to put food on our table? It appears most of us do not give it much thought at all. In fact, we often take food for granted.

But they don't mind the hard work, as long as the farm field is a fair playing field. But fairness is often not the case.

Jim Ennis, executive director of Catholic Rural Life, told me that small and mid-size family farmers are facing many headwinds. Among the biggest challenges he said are access to affordable credit for cash flow operations; availability to land for beginning farmers; access to markets for farmers' products that can sustain the family farm (consolidation and concentration in the processing and marketing of agricultural products often makes access to markets difficult); access to farm laborers willing to work on the farm; and lack of affordable health care for farm families and farmworkers.

To offer support to family farmers, Ennis said that Catholic Rural Life is asking us to: 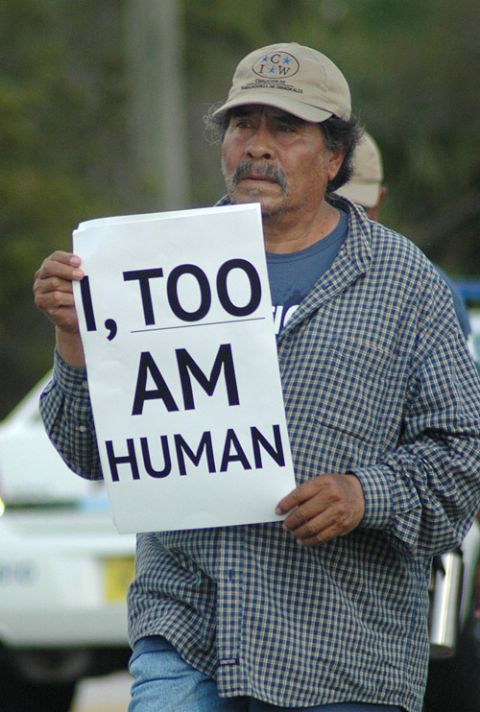 A farmworker and member of the Coalition of Immokalee Workers holds up a sign March 10, 2012, in Lakeland, Fla., during in a march to urge the Publix Supermarket chain to sign a "Fair Food" agreement that would pay an extra penny per pound for tomatoes harvested by the workers. (CNS/Jean Gonzalez, Florida Catholic)

Now consider the plight of farmworkers — often more difficult and unjust than that of family farmers.

According to National Farm Worker Ministry most farmworkers lack workers' compensation, health insurance and disability coverage, the right to overtime pay and the right to form unions and collective bargaining. Furthermore, they are often paid low wages and exposed to dangerous pesticides.

And for farmworkers who are undocumented, their hardships are even worse.

According to the nonprofit Farmworker Justice, "there are an estimated 2.5 million farmworkers laboring on our nation's farms, cultivating and harvesting crops and raising and tending to livestock." Reviewing data from the U.S. Department of Labor, Farmworker Justice estimated in a 2014 memo that "roughly 1.2 million to 1.75 million farmworkers are undocumented." The undocumented have virtually no rights whatsoever. And they live, especially under the Trump administration, in constant fear of being deported back to very poor and dangerous places, and often having their families torn apart in the deportation process.

"Consciousness + Commitment = Change" is the proven axiom of the Coalition of Immokalee Workers — a farmworker-based human rights organization which has gained international recognition for promoting social responsibility, and fighting human trafficking and gender-based workplace violence.

Its Fair Food Program of hard-won, negotiated agreements between farmworkers, tomato growers in states such as Florida and New Jersey, and retail buyers like Subway and Whole Foods has gained for many farmworkers significant wage increases and decent working conditions.

The Catechism of the Catholic Church, under the heading of "The Seventh Commandment: You shall not steal," insists that "the goods of creation are destined for the whole human race."

May we have the moral courage to stand in solidarity with those who seek their fair share of the goods of creation.

[Tony Magliano is an internationally syndicated social justice and peace columnist. He is available to speak at diocesan or parish gatherings and can be reached at tmag@zoominternet.net.]