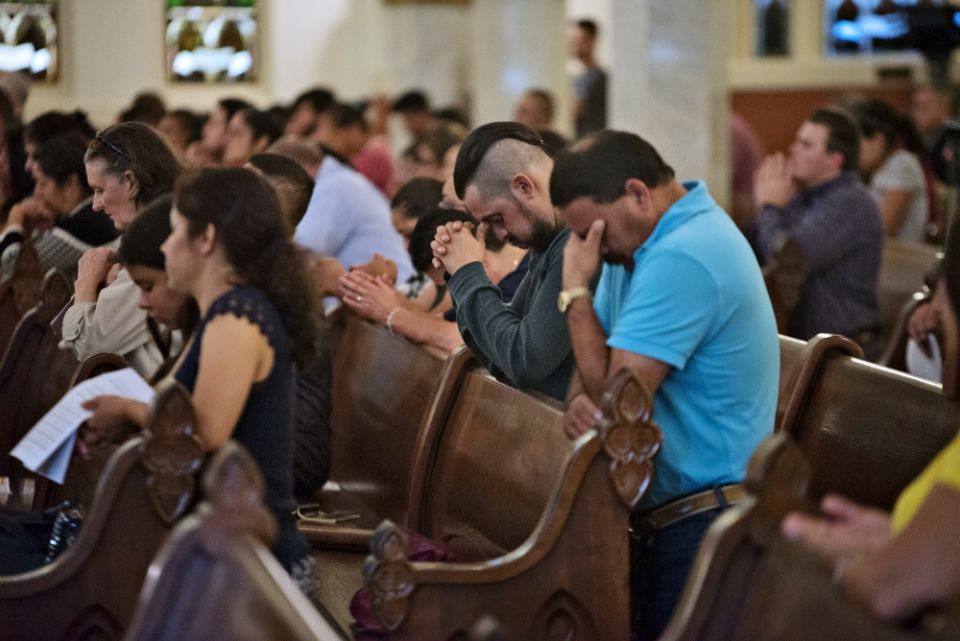 People pray during a healing Mass Aug. 7 at the Cathedral Shrine of the Virgin of Guadalupe in Dallas for the 31 victims killed in the mass shootings in El Paso, Texas, and Dayton, Ohio, Aug. 3 and 4. (CNS/The Texas Catholic/Jenna Teter)

We are hurting. The public charge regulation being finalized this week is just the latest attack against immigrant families by this administration. Despite overwhelming opposition, the Trump administration has chosen to advance a regulation that directly harms families and communities and threatens a core principle of the American immigration system: family unity.

The public charge regulation reinforces a preferential option for the wealthy — rather than for the poor, as we find in the Catholic faith — and exacerbates fears already felt by immigrant communities. It cuts to the heart of the most basic realities for immigrant families and calls into question a more than 100-year-old recognition that health care and food are basic to the ways families provide for loved ones, remain productive and help communities thrive.

As Pope Francis reminds us, echoing his predecessors, the Catholic Church expects the basic human rights St. John XXIII summed up in his encyclical Pacem in Terris to apply to migrants as well: "the right to live ... and to the means necessary for the proper development of life, particularly food, clothing, shelter, medical care, rest, and finally, the necessary social services." St. John Paul II emphasized that the right not to emigrate, or "to live in peace and dignity in one's own country," is as fundamental as the right to emigrate. This echoes John XXIII's encyclical Mater et Magistra.

The current administration seems to find it increasingly difficult to identify and respect basic rights.

This announcement comes just after a punishing week for immigrants and for our Latino brothers and sisters in particular. Just over a week ago, in an act of domestic terrorism, a gunman stormed into a Walmart in El Paso, Texas, armed with an assault rifle and multiple magazines to, by his own admission, target "Mexicans." He killed 22 people and injured a dozen more. The majority of the victims had Hispanic last names, and eight were in fact nationals of Mexico.

A manifesto apparently written by the assailant promoted white supremacist views, such as fearing "replacement" and blaming a "Hispanic invasion of Texas" for his actions. Immediately, troubled readers were able to draw parallels with some of President Donald Trump's own verbal attacks on immigrants, including talk of an "invasion" and scaremongering about "open borders" and "fake news." When a leader demeans and diminishes the humanity of a group of people, and paints entire populations as threats, those with hate in their hearts and guns in their hands are emboldened.

Across the country, the Latino community is hurting and afraid. We stand with them in grief and solidarity.

Then, just four days later, as the nation reeled from the tragedies in El Paso, Gilroy and Dayton, the administration greenlighted the largest immigration raids in a decade at several food-processing plants in Mississippi. Nearly 700 workers were arrested. Many children returned from school to empty homes, after their parents were hauled away from their jobs and families — their futures uncertain. The immorality of family separations continues.

This dramatic show of force came in a state with limited legal resources, where few people are aware of their rights, and with limited emergency planning for child care. This is an inexcusable infringement upon the dignity of workers and of parents and their children. It underscores the seminal work that the Catholic Legal Immigration Network Inc. (CLINIC) and so many others have done to ensure that all immigrants know their legal rights and can get appropriate assistance.

Community preparation is more essential than ever, including know-your-rights trainings, help for neighbors in case of enforcement actions, child care when parents are arrested, financial assistance for affected families whose main breadwinner is arrested or deported, and support for organizations offering legal services. All of us can work to create safe communities, where local authorities prioritize protection over enforcing unjust immigration actions.

I call upon Catholics, other Christians and all people of faith and goodwill to pray for peace and to stand up against these attacks on working families and migrants, all our dear sisters and brothers. Be sure to contact your elected officials and protest this mistreatment of human persons. Justice demands truth-telling when dehumanizing, nativist and, frankly, racist rhetoric continues to characterize the president's approach to immigrants in general, and our Latino brothers and Latina sisters in particular.

These unrelenting attacks on the life and dignity of families — from our government or from hateful, ideologically driven people — contradict American claims enshrined in the Constitution to life, liberty and the pursuit of happiness of all. As St. Katharine Drexel invites us in phrase that provides the title for the U.S. bishops' recent pastoral letter against racism: "Let us open wide our hearts." We need to stop the bleeding and begin the arduous task of healing.

[Bishop Kevin W. Vann of Orange, California, is chairman of the board of directors of the Catholic Legal Immigration Network Inc.]

A version of this story appeared in the Aug 23-Sept 5, 2019 print issue under the headline: Stop the bleeding: Attacks on immigrants are attacks on all .

Commentary | Stop the bleeding: Attacks on immigrants are attacks on all of us