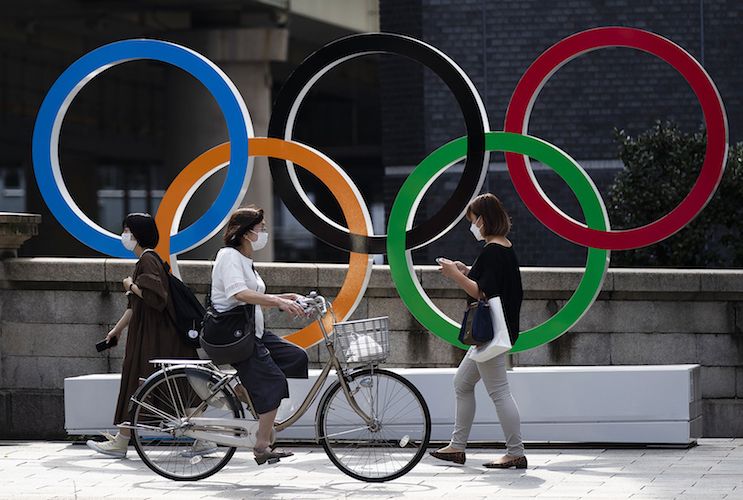 People walk by the Olympic rings installed by the Nippon Bashi bridge in Tokyo on Thursday, July 15, 2021. (AP Photo/Hiro Komae)

(RNS) — Spectators already have been banned from the upcoming Olympic Games in Tokyo amid a surge in COVID-19 infections in the area.

Now the city's Catholic archbishop has banned visitors to churches in the Archdiocese of Tokyo, too.

That includes athletes competing in the games and their support staff, according to a letter released earlier this week by Tokyo Archbishop Tarcisio Isao Kikuchi, as Japan declared a state of emergency for the fourth time amid the continuing COVID-19 pandemic.

The state of emergency runs through Aug. 22 in the Tokyo metropolitan area.

“All those who will be coming to the Tokyo Metropolitan area during this period will be provided with information concerning the precautionary measures implemented against COVID-19 infection in the parishes and will be requested to refrain from visiting churches,” Kikuchi wrote.

Parishes in the Tokyo archdiocese have also canceled plans they had made to “address the spiritual needs of the many people who would come to Japan for this international event,” according to the letter. “Thus,” the archbishop wrote, the archdiocese “will not take any special involvement in the Olympics and Paralympics.”

The Tokyo Olympics, originally scheduled for 2020, will run July 23 to Aug. 8, followed by the Paralympics.

About 11,000 athletes from around the world are expected to compete in the Olympic Games. Several prominent Olympians on Team USA have been outspoken about their Catholic faith and upbringing, including gymnast Simone Biles and swimmer Katie Ledecky.

The Tokyo archdiocese will make livestreams of Sunday Masses and other devotional videos available to Catholic athletes in multiple languages, the Union of Catholic Asian News reported.

The Olympic Villages at past games have included multifaith centers, though the International Olympic Committee did not immediately confirm to Religion News Service what religious accommodations will be made for athletes in Tokyo. One Japanese organization, the Yasu Project, announced plans last year to park its Mobile Mosque, a truck modified to provide space for Muslims’ five daily prayers, outside Olympic venues during the games, according to Reuters.

Coronavirus cases in the Tokyo area reached a six-month high on Thursday (July 15), according to USA Today. The rollout of COVID-19 vaccines has been slow in Japan, with just 19.7% of the population fully vaccinated, the newspaper reported.

“At the same time, the gathering of the athletes and their support staff coming from all over the world raises concerns about causing further increase in number of coronavirus cases,” Kikuchi wrote in his letter.

Other precautionary measures taken by the Tokyo archdiocese during the state of emergency include relieving Tokyo Catholics from their obligation to attend Sunday Masses, limiting the number of people inside churches to allow social distancing, refraining from singing and reciting prayers corporately during Masses and recommending those who are elderly or have chronic illnesses pray at home.

Since the pandemic began, the archdiocese has committed that “we will not be infected, nor will we allow others to be infected,” according to the archbishop.

“Let us keep in mind that it is an important duty for us to protect not only our own lives but also to protect all those who have received God’s gift of life. On top of that, as we take adequate measures against COVID-19 infection, let us do our best to respond to the concerns of those in need,” he wrote.

“In this difficult situation, may the merciful hands of our Lord through our outstretched hands be extended to the many people facing crisis in their lives.”

Hope is where we must dwell