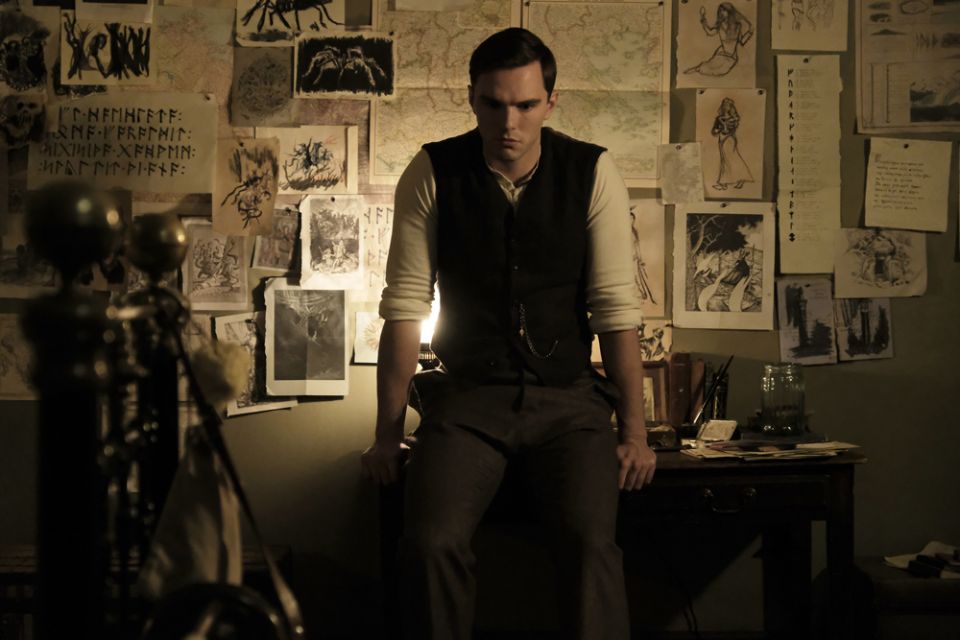 In July 1916, young British signals officer J.R.R. Tolkien (Nicholas Hoult) lies extremely ill in the trenches at the Battle of the Somme in France. He is desperate for news of his dear friend, Geoffrey Bache "G.B." Smith (Anthony Boyle), who hasn't written for some time. The experience of battle stays with Tolkien as he returns home to finish his military service, too ill to remain in France.

The film "Tolkien" then flashes back to young Ronald (as John Ronald Reuel Tolkien is known, and played as a youth by Harry Gilby) and his younger brother Hilary (Guillermo Bedward as a youth and James MacCullum) playing in the wood near Birmingham, England. They have recently come to England from South Africa and are waiting for their father to join them. Their father dies before he gets to England and leaves his family in poverty. Their mother, Mabel (Laura Donnelly), loves to tell the boys stories and even acts them out, using a kind of magic lantern to make images on the wall. Ronald develops a love for stories, language and drawing; he lives in his imagination. Ronald makes wonderful mythical sketches in his copybooks. Now a poor widow, Mabel finds a small home with the help of a Catholic priest, Fr. Francis Morgan (Colm Meaney).

When Ronald is 16, he comes home from school one day to find that their mother has died, and Morgan is his guardian. He obtains a scholarship for Ronald at the prestigious King Edward's School and places the brothers in a boarding house run by the elegant but stern Mrs. Faulkner (Pam Ferris). There is a young lady boarder there as well, Edith Bratt (Mimi Keene as a youth and Lily Collins), who practices the piano, hoping to find employment with an orchestra. Ronald and Edith, both orphans, are drawn to each other, even though Edith is three years older than Ronald.

At school, Ronald has a hard time making friends at first. But after reciting "Beowulf" in flawless Old English, he, the poetical G.B., Robert Q. Gilson (Albie Marber as a youth and Patrick Gibson), and the bold and daring Christopher Wiseman (Ty Tennant as a youth and Tom Glynn-Carney) become fast friends. They form a secret society called the T.C.B.S. that stands for Tea Club, Barrovian Society. Ronald is already writing in his own secret language and the boys, especially Geoffrey and Ronald, are dedicated to poetry. As time goes on and they are called up to go to war, their friendship becomes an alliance, a fellowship, a bond that influences Ronald and his love for myth and fantasy for his entire life.

After he takes Lily to a concert on the eve of taking his exams for Exeter College at Oxford, Ronald is distracted and scores very badly. Morgan is disappointed and forbids Ronald to have anything to do with Edith until he is 21. Though devastated, he obeys until the night before his 21st birthday, when he writes to the love of his life.

Once at college he encounters Professor Joseph Wright (Derek Jacobi), the noted philologist. Tolkien pursues the famed professor of linguistics, textual and historical criticism. When Tolkien can quote from ancient texts, Wright allows him into his class.

"Tolkien" is a beautifully rendered film, and Hoult (he has grown very tall since his appearance in the 2002 film "About a Boy") and Collins are confident and strong in their roles; their performances complement one another extremely well. I felt that the film gave me a sense of the key influences on Tolkien's writings: his mother's storytelling, nature and the devastation of war, his relationships with close friends, his love of language, and his education. Because of the role of the priest in his life it is easy to assume the influence of his Catholicism on his work, but there is not much else in terms of religious belief or spirituality.

There are three major criticisms of the film that I will note here. The first that some Catholic critics are unhappy about is the film's very light portrayal of Tolkien's Catholicism, its influence on his literary development and output, and entirely skipping over Edith's seemingly reluctant conversion from the Anglican faith before their marriage.

Another criticism is that the script, by David Gleeson and Stephen Beresford, takes much license with the timeline and order of events of Tolkien's life. For example, in reality he avoided joining the army by finishing his degree until he could no longer put it off, whereas the film has the four friends joining up together at the first call to arms. Also, he and Edith married before he left for France, rather than after his return from the front. The third criticism is that the film never mentions Tolkien's good friend C.S. Lewis. A film on Tolkien's inner life as well as his "middle life" is much needed.

I submitted a question to the publicist about these issues and the response was that the director, Dome Karukoski, simply could not get all of Tolkien's life into a two-hour film; he had to make choices. The film is not a documentary but a dramatic film with strong emotional and romantic themes of Tolkien's youth that inspired his work and the outward reality that influenced it.

The film does show that Ronald and Edith went on to have four children and notes how the huge success of his novel The Hobbit (1937) made him England's foremost writer of fantasy. I think an episodic series on Tolkien's life may have served his biography better (and still may do so), but this lovely film, however limited, is a fine introduction to the life of the man who gave us so much to imagine about humanity, love, friendship and courage in The Lord of the Rings trilogy.

If you know Tolkien, your gestalt and Catholic imagination will fill in the rest.

Opinion | 'Tolkien' gives limited, lovely portrayal of 'The Lord of the Rings' writer