In 'Transform Now Plowshares,' the legacy of anti-nuclear Catholic activists informs our future 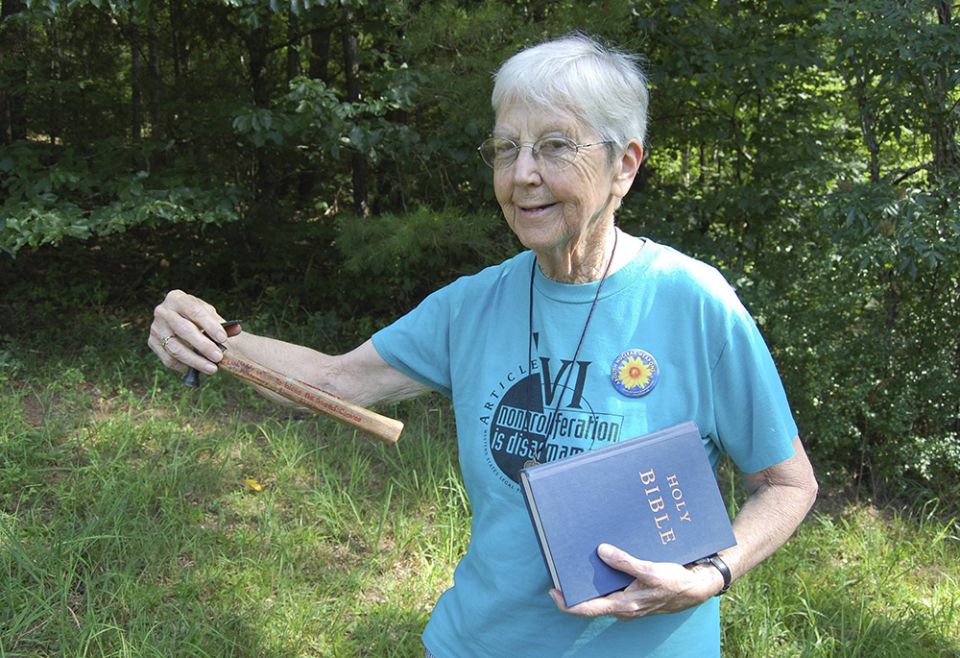 Sr. Megan Rice, a member of the Sisters of the Holy Child, and two fellow protesters broke into the primary storehouse for bomb-grade uranium in the U.S. in July 2012 in Oak Ridge, Tennessee. Rice is pictured in an undated photo. She died in 2021. (CNS/Transform Now Plowshares handout via Reuters) 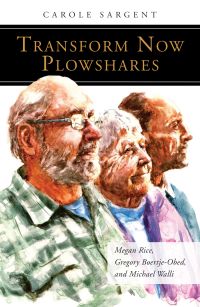 Is there cause for hope in these perilous times? With Russia's war against Ukraine igniting international conversation about the use of nuclear weapons, it's up to the citizens of the nuclear nations to call our countries to their senses. The Transform Now Plowshares did this with their nonviolent action in July 2012. "A Holy Child sister and two Catholic Workers committed the largest breach in US nuclear security history," as it says on the back cover of Transform Now Plowshares: Megan Rice, Gregory Boertje-Obed, and Michael Walli. Author Carole Sargent has written an engaging and exciting book that can inspire us to stand together in similar hope once again.

Transform Now Plowshares profiles the three faces of the action, Sr. Megan Rice, Greg Boertje-Obed and Michael Walli, as well as the cast of supporting players behind the scenes. Plowshares actions — of which there have been over 100 since the group’s inception in the early 1980s — are characteristically composed of four parts: discernment and planning; the action itself; the trial and supporting activities surrounding it; and finally, imprisonment. In the Transform Now Plowshares action of 2012, the larger planning group became three who pledged to do the action, with many "unindicted co-conspirators" in the support circle.

One of those co-conspirators was Sacred Heart Sr. Anne Montgomery, who had been a member of the first Plowshares group at King of Prussia, Pennsylvania, in 1980, the brainchild of Philip Berrigan and the renowned Jonah House. Montgomery met Sr. Megan Rice at the trial for the last of the former's actions and the two women bonded over their shared religious vocation and passion for activism. Montgomery later connected Rice with Greg Boertje-Obed, and the rest is history.

Rice, Boertje-Obed and Walli chose to protest at the "mother plant" of the country's nuclear arsenal: the Y-12 facility at Oak Ridge, Tennessee, a behemoth which produces the deadly enriched uranium necessary for nuclear weapons. As such, it is protected with high security; a reported $150 million a year goes to private contractors to ensure that this is so. 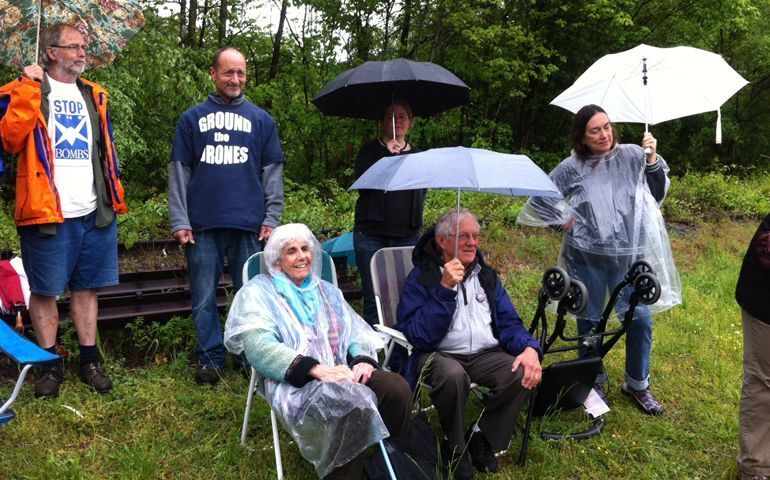 After planning and prayer, the three nonviolent resisters cut through fences of the 150-acre complex and walked down hills and through ravines in the dead of night to reach the heart of the complex. They carried with them bolt-cutters, flashlights, tiny hammers in which to symbolically "beat swords into plowshares," spray paint, a Bible, bread, banners, candles and a statement of intent. Their hope was to expose to the world the truth about nuclear weapons and, in particular, the spending of vast sums of our taxpayer money to build a new Highly Enriched Uranium Materials Facility at Oak Ridge.

As unlikely as it was, the elaborate security system failed to stop the resisters. Sargent writes, "Whether you call it contractor ineptitude, the Holy Spirit, or pure luck" the three activists walked unseen through areas no one should have been able to enter. They hung banners, poured blood and spray-painted slogans on the corner of a building and, when they reached the center, prayed, sang and awaited arrest until security guards finally came. Together they summoned an imagination for the transforming of the facility "into life-giving alternatives which resolve real problems of poverty and environmental degradation for all."

This particular Plowshares action generated more publicity than any other because of the egregious security failures. Y-12 was closed for two weeks. As reported by The Washington Post and elsewhere, security cameras were repaired, one guard was fired and others suspended, officials changed and congressional hearings were held. Sargent does a commendable job of detailing with clarity the often murky trial throughout several chapters. On May 8, 2013, in less than three hours, the jury found them guilty of depredation of property and sabotage (the intent to cause injury to the national defense system). After the defendants spent the long intervening months in jail, they were sentenced to federal prison in February 2014. In May 2015, however, the conviction for sabotage was vacated by a federal appeals court and the resisters were swiftly released from prison.

The book ends with a joint letter Rice, Boertje-Obed and Walli wrote on the second anniversary of their action: "In order for the US to negotiate for nuclear disarmament in good faith, we say it is essential to peaceably transform these very corporations so that they are no longer able to violate the most basic moral and legal principles of civilized society by deliberately precipitating planetary self-destruction."

When read with care and prayer, Transform Now Plowshares can move us from politely protesting nuclear armaments to nonviolently acting for their abolition, calling our country in stronger and stronger ways to abolish its arsenal and encouraging the citizens of the other nuclear countries to do so as well.

As I worked my way through this book during the most dangerous nuclear moment since the Cuban missile crisis in 1962, I felt both sobered and hopeful. Sobered because the new Y-12 nuclear bomb factory that these three Catholics risked their lives to protest is still being completed and will still supply the enriched uranium they were protesting. But hopeful because this present moment calls us all to action. Apathy is not an option; we must widen the circle and become ourselves conscientious resisters. Author Carole Sargent, a member of the beloved community of anti-war activists, asks, "And if not us, who?" Her last words in Transform Now Plowshares: War no more.

Related: Woman religious who crusaded against nuclear weapons dies at 91
Related: 'Yes, I can do that' – Sr. Megan Rice's legacy of anti-nuclear weapons work 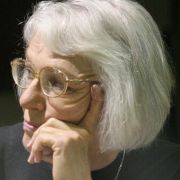 Rosalie Riegle calls herself a "Catholic Worker at large." Professor emerita in English at Saginaw Valley State University in Michigan, she co-founded a Catholic Worker in Saginaw and has written 4 oral histories of Catholic Workers and others working for peace.