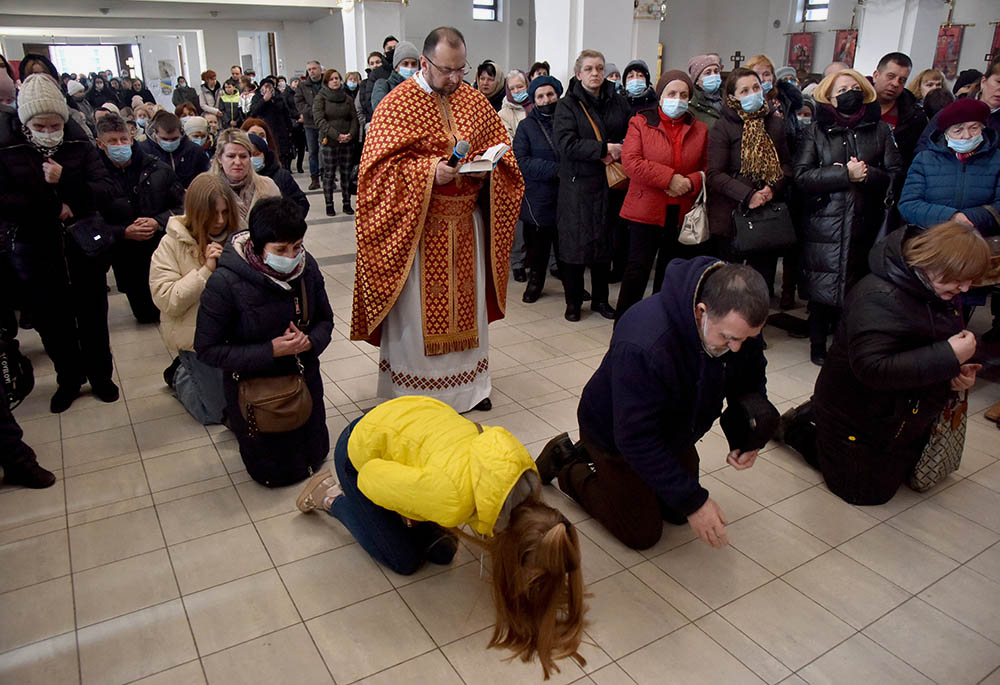 People pray for peace in Ukraine in front of the replica of the original statue of Our Lady of Fatima in the Church of the Nativity of the Blessed Virgin in Lviv, Ukraine, March 18, amid Russia's invasion of the country. (CNS/Reuters/Pavlo Palamarchuk)

Slowly emerging from the heartbreak of death, destruction and massive displacement caused by Russia's illegal invasion of Ukraine are the inspiring demonstration of diverse nonviolent strategies that are upending the logic of war, and the recognition that if we are to avoid World War III, de-escalation, diplomacy and peace-building are the only route forward.

Agreement is widespread that the stories of creative, active nonviolence in Ukraine and Russia must be told. They are stories about dogged diplomacy, civil resistance, elements of civilian-based defense, symbolic action, non-cooperation, winning over enemy combatants, solidarity and accompaniment, music and art, acts of kindness and welcome, the use of digital tools to document war crimes and more.

They are about nonviolence — a way of life and a spectrum of realistic, effective strategies for preventing or interrupting violence, for protecting human life and the planet, for promoting a more just and peaceful world. 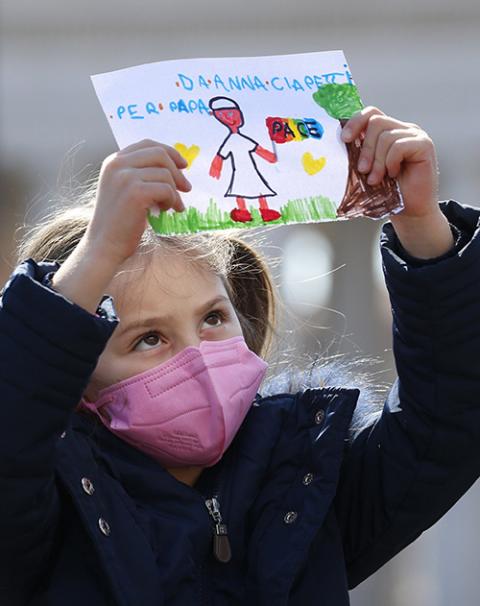 A girl holds artwork showing Pope Francis holding a peace flag as the pope leads the Angelus from the window of his studio overlooking St. Peter's Square at the Vatican March 13. (CNS/Paul Haring)

This is what nonviolence researcher Maria Stephan calls "a moment of profound moral clarity." The war in Ukraine is not more important than the other wars destroying human lives and the Earth, but, as the British Catholic magazine The Tablet editorialized on March 19, it is "history-making, game-changing, paradigm-shifting."

The perennial debate on just war criteria continues, but given the ongoing carnage and potentially catastrophic consequences, Pope Francis' assertion that "there is no such thing as a just war" rings true.

The question is not whether to defend against a brutal military invasion, but how. The nonviolent strategies being used by Ukrainians in many different locations are vitally important and illustrate powerful and effective ways to defend their communities and to break the cycles of violence. Their courageous actions point to a future when nonviolence will be the universal ethic that humans, for the sake of survival, have finally embraced.

To move in that direction, we know what we need to do. We know that we need a paradigm shift. We have been living in a context of war and preparations for war, assuming that militarized security was the only way to survive. We in the U.S. have shaped our society, and especially our economy, around that belief.

The war in Ukraine is hyper-visible and, by its too-possible link to nuclear weapons and its threat to nuclear power plants, it is über-dangerous, an existential threat to all life and our common home, planet Earth. But the unquenchable, heartbreaking violence unleashed by war in Yemen, Syria, Afghanistan, Iraq, Gaza, Colombia demands the same response. 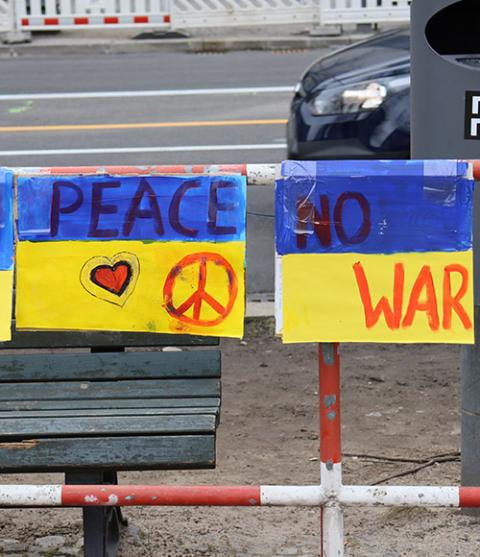 Signs painted in the colors of the Ukraine flag call for peace outside the Russian Embassy in Berlin March 4. (NCR photo/Teresa Malcolm)

We know what we need to do. We need to stop accepting perpetual war and unending layers of violence as normal. Racism, imperialism, militarism, nationalism, the theft of resources to prepare for war, economies dependent on and fortunes made from trade in weapons, cultural violence, economic violence, extremes of wealth and poverty, gender-related violence all create fertile soil in which violent conflict and war percolate and spread.

We know what we need to do. We need to reject the possibility that war can be just. Period.

We know what we need to do. We need to stop dismissing nonviolence as naive, simplistic, disengaged or ineffective and to invest in a radical reset of our values, our priorities, our relationships with each other and with the planet. We need to start right now to build a new nonviolent paradigm that replaces the scarcity model and "survival of the fittest" with values that draw on the wisdom and experience of cultures and traditions committed to respect, wholeness, connectedness, mutual dependence, reciprocity, justice and life, and upon which we need to rebuild the systems and structures of our societies.

Such a complete shift may take decades: of listening to the stories and understanding the experience of the most marginalized and neglected communities; of transformative education, life-skills development and values formation; of redesigning and rebuilding political, economic, financial, social, cultural, environmental systems so that they promote socioeconomic justice, human dignity, whole Earth healing and, therefore, peace.

Every step toward a solution in Ukraine must lead toward the kind of paradigm shift that we know we have to make if we plan to survive for much longer on this planet. For example: 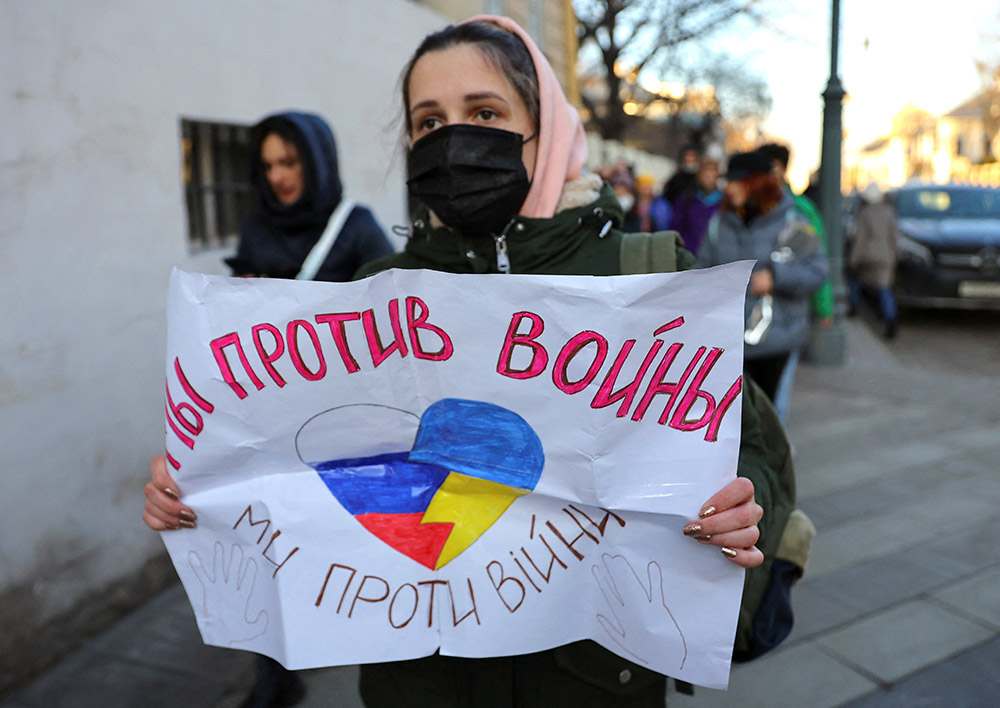 A young woman holds a sign that reads "We are against war" during a protest in Moscow Feb. 27, after Russia attacked Ukraine. (CNS/Reuters/Evgenia Novozhenina)

Pope Francis, following Jesus, has been setting the stage for full-on Catholic engagement in this urgent paradigm shift. His visionary 2015 encyclical, "Laudato Si', on Care for Our Common Home," his clarion call for ecological conversion and for a "new post-pandemic normal" point clearly in this direction.

In the 2020 encyclical Fratelli Tutti, he said: "Every war leaves our world worse than it was before. War is a failure of politics and of humanity, a shameful capitulation, a stinging defeat before the forces of evil."

And to an international congress of educators on March 18, he said: "A war is always — always! — the defeat of humanity, always. ... There is no such thing as a just war: They do not exist!"

This story appears in the War in Ukraine feature series. View the full series.
A version of this story appeared in the April 1-14, 2022 print issue under the headline: Ukraine shows we must reject possibility that war can be just.