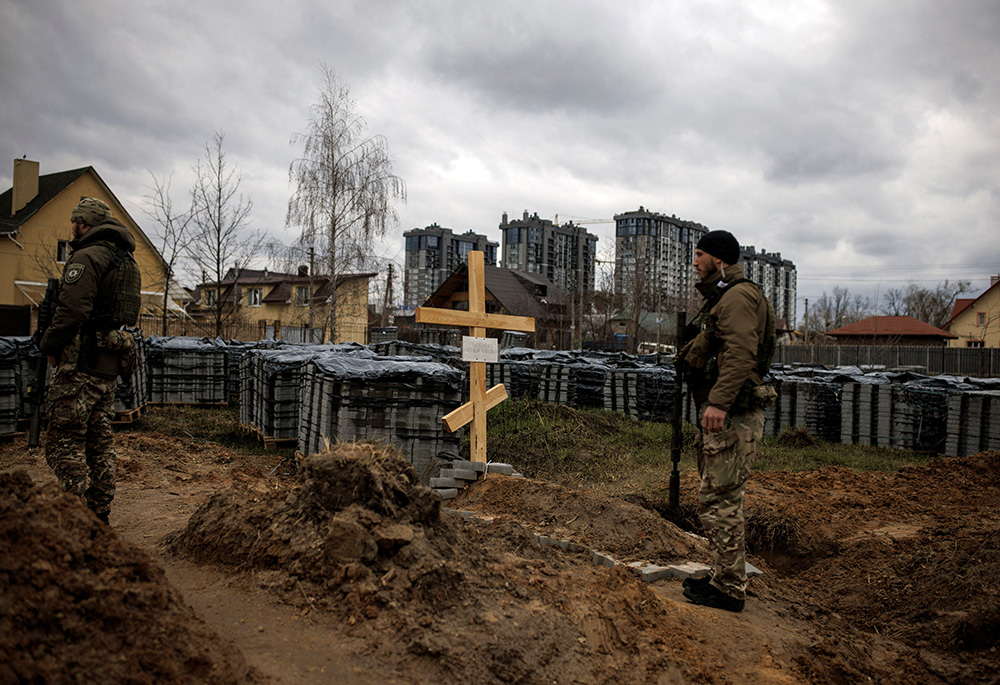 Ukrainian soldiers stand next to the grave of a civilian April 6 in Bucha, Ukraine. Local residents said the civilian was killed by Russian soldiers during Russia's invasion of Ukraine. (CNS/Reuters/Alkis Konstantinidis)

It was difficult not to turn away, not to close one's eyes. The pictures from Bucha, Ukraine, were too painful. The streetscape strewn with dead bodies, their hands tied behind their back. The old woman in what was once a garden, where three corpses now invited the worms instead of spring's flowers.

In a war marked by atrocities that were broadcast in real time around the world, these images were too much. Bad enough to see a bombed-out apartment building, or a hospital that had sustained shelling from distant artillery. The dead of Bucha had been murdered at close range. The perpetrators had seen whom they were killing. Perhaps that fact, the closeness of the murdered to the murderers, accounted for the special horror.

The images were too much for Pope Francis as well. At his general audience on April 6, he held up a Ukrainian flag brought from the "martyred city" of Bucha and reverently kissed it. It was a remarkable gesture coming from a pope who has been repeatedly skeptical about nationalism and its symbols. The pope invited some Ukrainian refugee children to the stage to join him.

On Sunday, April 10, Latin-rite Christians will begin Holy Week. We will hear the opening Gospel, before processing into the church, in which we join ourselves to the crowd shouting "Hosanna" to Jesus as he entered Jerusalem. Later, the second Gospel will be read, the Passion account, and we will join the crowd shouting, "Crucify him!" The shift from one Gospel to the other is always jarring, a reminder of the often fine line between grace and evil. It will be harder this year, when the crucifixion of Jesus is less remote, not only in the streets of Jerusalem 2,000 years ago but in the streets of Bucha and Odessa and Mariupol last week. And next week. 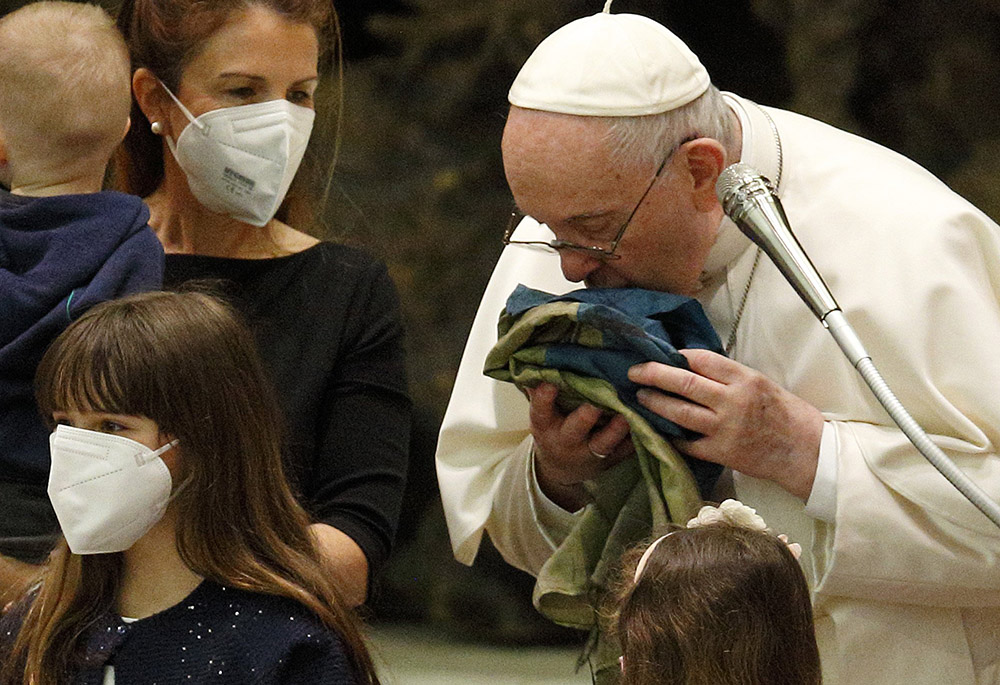 Pope Francis kisses a Ukrainian national flag from Bucha as he meets Ukrainian refugees during his general audience in the Paul VI hall April 6 at the Vatican. (CNS/Paul Haring)

Every year, there is the temptation to rush to the end of the story, to hear the account of the empty tomb, first the women and then the apostles sharing the miraculous news: He is risen. We should always resist that temptation to rush ahead. We know how the story ends, but we need to sit with the sense of bewilderment and loss that the followers of Jesus felt as their hope he would be the Messiah crashed in the catastrophe at Golgotha.

This year, the temptation to rush ahead to the end of the story is remote. This year, it is easier to sit with Good Friday and the sense of abandonment by God it invites.

We want to hope with the psalmist, "Those who go out weeping, carrying seed to sow, will return with songs of joy, carrying sheaves with them" (Psalm 126). But how can we? Instead, we find ourselves muttering the lament:

How long, O Lord? Will You forget me forever?
How long will You hide Your face from me?

How long shall I take counsel in my soul,
Having sorrow in my heart all the day?
How long will my enemy be exalted over me?

Consider and answer me, O Lord my God;
Enlighten my eyes, or I will sleep the sleep of death (Psalm 13).

As we look to the dead in Ukraine, it is easier to remember the crucified Lord than the risen Lord, the God who is broken and beaten and murdered, not the glorified Son of God who reigns above.

All of the usual things we say to ourselves when times are tough seem ridiculous or worse when forced to confront the dead of Bucha. We believe that God is all-loving and all-powerful, but where was that love and that power this past month when they were needed in Ukraine? The people of that country prayed to God for protection and their prayer was not answered. With Jesus, they sigh, "My God, my God why have you abandoned me?"

We Catholics believe in human dignity, but how can we believe in it when such deeds are done? Where is the dignity in that garden with its corpses? What crime did they commit to warrant their execution?

We believe in social justice, but these murders mock our human ability to enact justice. This week, at the Hague, militia leader Ali Kushayb went on trial for war crimes for his involvement in atrocities in Darfur almost 20 years ago. He is the only defendant from that war. It is better he be held accountable for his evil deeds than not, but the justice seems so small compared to the evil committed. If the war in Ukraine ends tomorrow, if the Russian troops go home and the Russian people overthrow the warmonger and war criminal Vladimir Putin, none of that will bring these dead back to life.

We preach a gospel of solidarity, but how do we exhibit solidarity with the families of the victims? What can repair their loss? Six weeks ago, the neighbors looked at that garden, perhaps still covered in snow, and imagined it soon turning green with new life. Instead, there is new death. The streets now littered with dead were two months ago littered with young lovers stealing a kiss, people riding a bus to work. When a tornado runs through a region, causing devastation and destruction, once the storm has passed, the people of neighboring towns, towns that were spared, come to the aid of their unlucky friends. How to console an entire people, whose lives have been turned into hell, where no towns have been spared?

In the end, we are mute before this suffering. Words fail us and only tears bring solace. We remember that Job's friends tried to explain to him why he suffered and, at the end of the story, God upbraids them for their presumption. We should not emulate them.

Suffering is, ultimately, a mystery just like love, which is the other side of the coin of human fragility. No, that is not right. There is no simile. Suffering and love are the same mystery because only those who love suffer. Suffering, whether in Ukraine today or on Golgotha 2,000 years ago, is the face of love in the midst of evil. As Christians, we must always resist the evil, but we must also embrace the suffering in obedience to the example of the Master.