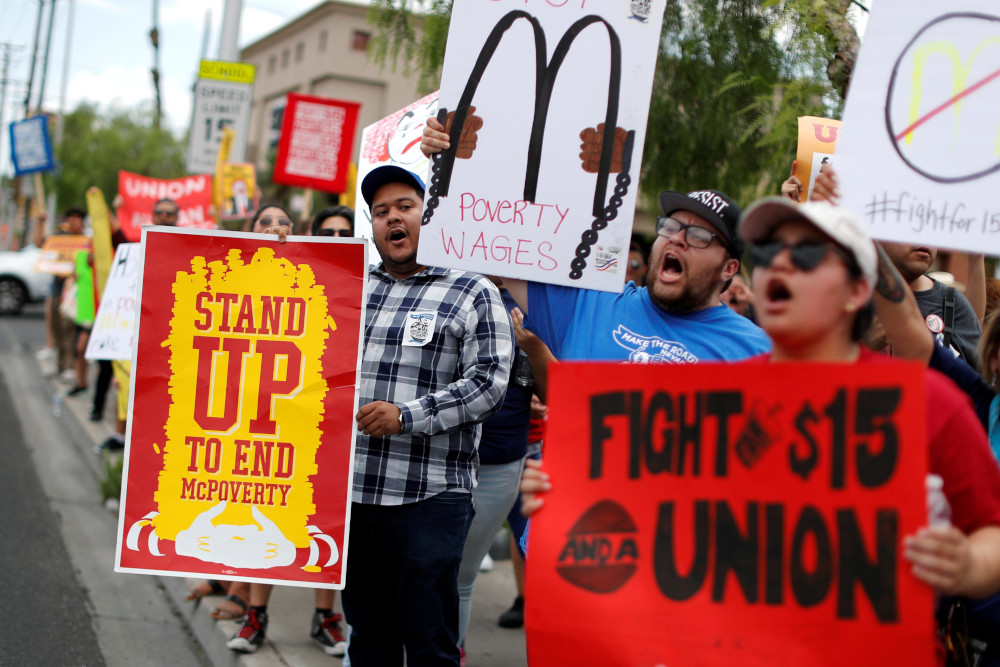 On Christmas Eve, the NFL star Stefon Diggs, the Buffalo Bills wide receiver, visited a McDonald's fast-food restaurant in West Seneca, New York, and tipped all the employees $200 each.

When I first heard this story early on Christmas morning, my reaction was commonplace across social media: I thought it was a very kind gesture of a generous man filled with the Christmas spirit. Indeed, what a striking sign of unexpected largess!

But upon further reflection, I became uncomfortable with the uncritically positive response to the situation, including my own initial feeling. At first, I couldn't quite make out why something didn't sit right with me. Then I realized that what wasn't being taken into consideration in any of the news stories or Twitter-trending applause was the larger context that provided the backdrop to this story.

Despite the widely debated "great resignation" discussed among the cable-news pundit class about the late pandemic trend of employees walking away from jobs that failed to satisfy financial or creative expectations, there is a category of people who cannot simply wait until a higher-paying or otherwise preferable job appears. Such people might very well be the kind of folks working low-paying jobs at McDonald's on Christmas Eve outside of Buffalo.

Those workers who do not have the luxury to stop working, even with the temporarily increased social safety net of pandemic unemployment relief, often not only work one low-paying job such as at McDonald's, but frequently juggle multiple low-paying jobs in order to make ends meet. The accrual of minimum-wage hours across several jobs still does not provide the other fundamental necessities required for basic human flourishing, such as health insurance.

I believe that Diggs was in fact being genuinely kind and I am not interested in impugning what I consider to be a sincere act of good will. Still, I recognize that two things can be true at the same time.

Diggs' generosity notwithstanding, the stark disparity in the ability of a multi-millionaire professional athlete to hand out a cash tip amounting to more than twice the average daily pay of the fast-food workers without a thought and economic precariousness that necessitates a class of people working at McDonald's on Christmas Eve reveals something terribly wrong about our society.

While many have rightly argued that it is better to share one's surplus wealth with those in need than it is to horde that wealth for oneself (cue the arrival of the ghosts from Charles Dickens' A Christmas Carol), how often do we step back to think about the twisted social and economic systems at work that allow some to obtain unthinkable wealth while others are condemned to struggle to survive?

In response, I find myself channeling the late Brazilian Archbishop Helder Camara, who said: "When I give food to the poor, they call me a Saint. When I ask why the poor have no food, they call me a Communist."

The startling income and wealth disparity in this country as reflected in Diggs' good deed revealing a bad system also reminded me of the 2008 book by Slovenian philosopher and cultural critic Slavoy Žižek titled Violence: Six Sideways Reflections. This insightful little volume looks at several social phenomena in our modern world and analyzes them from the perspective of violence.

Žižek, who is, among other identifiers, actually a scholar of Marxist philosophy, states from the outset that when we think of violence, we typically think of what he calls "subjective violence," which is "violence performed by a clearly identifiable agent." We think of "obvious signals of violence" that are "acts of crime and terror, civil unrest, international conflict" and the like.

And yet, this is only the most superficial level of the nature of violence in our society. Žižek suggests that, "we should learn to step back, to disentangle ourselves from the fascinating lure of this directly visible 'subjective' violence" in order to "perceive the contours of the background which generates such outbursts."

What we are able to step back and analyze the larger picture, we come to see an "objective violence" always already at work within and throughout the system itself. It is not easily recognizable because it is, as Žižek notes, "precisely the violence inherent to this 'normal' state of things. Objective violence is invisible since it sustains the very zero-level standard against which we perceive something as subjectively violent."

Among the threads of objective violence present within the social order is that it is tied to the economy. Žižek uses some of the best-known philanthropists in history as case studies of how the very condition of the possibility of their philanthropic largess is objective violence. He recounts how Andrew Carnegie "employed a private army brutally to suppress organized labor in his steelworks and then distributed large parts of his wealth to educational, artistic, and humanitarian causes."

More recently, one only has to look to Bill Gates and his (and his now former-wife's) philanthropic foundation to see how this plays out in real time. Žižek writes:

Bill Gates is already the single greatest benefactor in the history of humanity, displaying his love for neighbors with hundreds of millions freely given to education, and the battles against hunger and malaria. The catch, of course, is that in order to give, first you have to take — or, as some would put it, create.

I think he is on to something here, something that helps diagnose my discomfort with an uncritical celebration of the Christmas Eve show of gratuitous charity outside Buffalo.

"Charity is the humanitarian mask hiding the face of economic exploitation."

Just a few weeks before Diggs passed around hundred dollar bills at McDonald's, The Washington Post published an in-depth story about the conditions within a branch of the same fast-food chain in Bradford, Pennsylvania, just 80 miles south of Buffalo.

The story describes the circumstances that led to the local manager organizing a walk-out. These low-wage employees in an economically depressed town had finally reached their breaking point. As the Post reported, "The discontent driving the Bradford workers and so many others had been there for years, an ever-present aspect of an economy that could be especially cruel to anyone without an education."

With few or no options or recourse, those workers who walked out of the terrible conditions of their McDonald's job found themselves in comparable employment at other fast-food restaurants or in low-skill work. While several had landed in jobs that paid a few dollars more an hour, the objective violence of an economy that dehumanizes and dismisses the working class continues to crush their spirits and even their bodies through difficult labor.

At Christmas, we celebrate God becoming one of us, entering into our human experience as one of the most precariously situated in another unjust social context two millennia ago. The message of Christianity is one in which God reveals most fully how the social systems of oppression and injustice are antithetical to God's intention for humanity.

It is therefore sadly ironic that a well-meaning Christmas gesture draws attention to the objective economic violence that lies in the background. And while those who without doubt could use some extra cash graciously received the $200 gift, it does little to change the reasons they don't have sufficient resources in the first place.