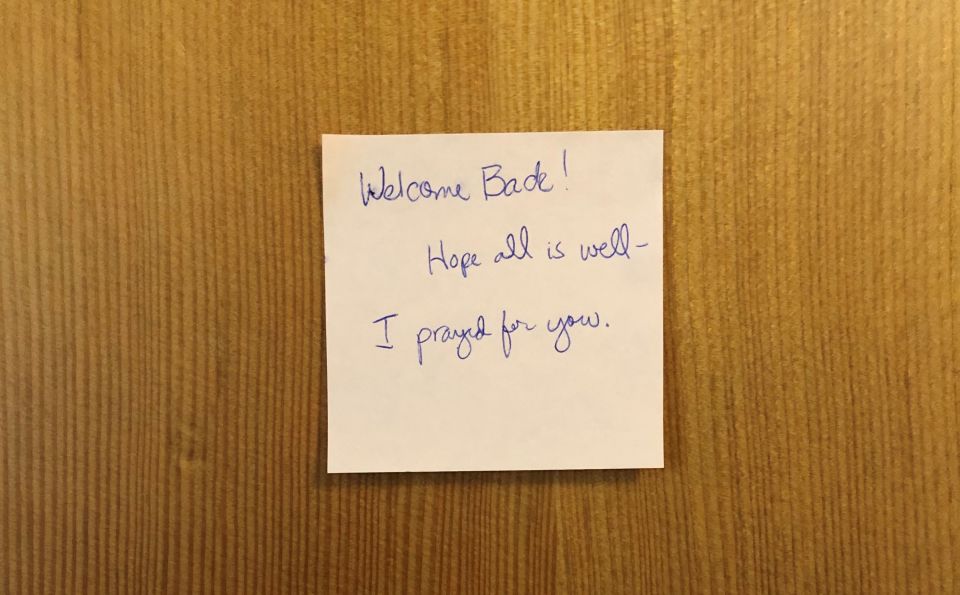 Interruptions. Most of the time I find them completely annoying. I'm in the middle of a task that requires a fair amount of concentration and someone pops their head into my office with the deadly question, "Do you have a second?" I know the right answer (both professionally and charitably) is, "Of course!" but I am sorry to admit that my immediate internal reaction is usually, "Right now?" I don't do well with interruptions most of the time.

A friend of mine often says that our real mission is the interruption, that everything else is just work. I find that beautiful and inspiring, but not easy and certainly not practical! Could it be true, though?

Last week, I was supposed to be making my annual retreat — a blissful week of silence and prayer, time away from email, phone, meetings and text messages. I look forward to this retreat week every summer, and indeed it has always been a time of refreshment, rejuvenation and renewal.

Due to circumstances beyond my control, however, my retreat this year was interrupted after only two days, and I needed to return to the work-a-day world of my ministry for three of those supposed-to-be-silent-and-blissful retreat days. I was certainly not of the mind that it was the Holy Spirit who worked out this particular circumstance "for my good," but it has since become apparent that God wanted to take that annoying interruption and turn it into something grace-filled.

I returned after three days to pick up with the remainder of my retreat as best I could. I tried to be as inconspicuous as possible walking back in the house with my bag since the other 40 retreatants were deep into their sacred experiences and I didn't want to interrupt their recollection. (Remember: for me, interruption = annoying.) I got myself unpacked and when I left my bedroom about half an hour later, I found a sticky note attached to the door. "Welcome back. Hope all is well. I prayed for you." A note left by a neighbor who happened to notice my absence.

Now, there are a few things to know about Ignatian retreats. The silence of these days is strictly heeded. This is just the way an Ignatian retreat works; rather than being awkward or off-putting, it actually carves out a sacred and beautiful space where a unique kind of community forms. The only person you speak to during these days is your spiritual director and maybe the people to whom you offer the sign of peace at Mass. I had not gotten to know any of my fellow retreatants beyond the initial group introduction the first night, and I had not met any of them before the retreat. The fact that someone noticed that I had been missing was a gift in and of itself. (I'll come back to that in a minute.) But the fact that that individual opted to interrupt her own retreat in order to reach out to me — that was more than gift; that was grace. An interruption chosen. For the sake of another. An act of unconditional, gratuitous love … for a stranger — a stranger she decided to name friend.

Interruptions can certainly be the result of life's messiness — smoke alarms resulting from burnt pot roasts, robocalls in the middle of dinner, thoughtless intrusions into private conversations. I can't espouse the notion that every interruption is a visit from the holy. But some certainly are. The angel Gabriel visits Mary and interrupts her very simple, very normal life in order to change all of human history. A text message announcing a new nephew interrupts a very important board meeting. A person on your retreat disappears unexpectedly and leaves you wondering if everything is ok in her world.

I have spent many moments in the past week thanking God for the gift of my fellow retreatant who left that note last week. She noticed my absence. This was the first gift. Why did that observation touch me so deeply? Because it said to me that my presence mattered to her. We can't notice that someone has been missing if we didn't care whether or not they were present in the first place. Her recognition and acknowledgement that I was gone and had returned spoke to me of care, concern, respect and a type of love that resembles Jesus. She taught me what it means to be a Christian; she reminded me of why I have given my life in consecration as a religious; and she challenged me to recognize how I need to improve in the ministry of discipleship.

But she went beyond just noticing. She took the time — a simple gesture, really — to jot a quick note and leave it on my door. A chosen interruption to her own retreat in order to reach out to another and express care, concern, respect and Gospel love. A gesture that made her Jesus to me. I may never find out who she is, but I venture to say that if I were to ask her about that "interruption" to her retreat, she wouldn't characterize it as such. My guess is that for her, it was an extension of her retreat, an expression of her relationship with her loving God, who formed her heart into one that notices, cares and reaches out in love.

Now it just so happens that today is the Feast of the Sacred Heart of Jesus, the feast that celebrates the outpouring of love in the most meaningful and significant of ways. Jesus' life and ministry was "interrupted" by his crucifixion (to put it lightly). A three-year ministry stint and a life ending at age 33 are not lengthy by any stretch of the imagination. This "interruption," made possible by human weakness, meanness, pride, fear and error, was not the "best case scenario" of humanity's response to the Incarnation of the Second Person of the Trinity. We betrayed him, denied him, scourged him, mocked him and killed him. And then, we thrust a spear straight through his heart, just to be sure he was dead.

What was the response of Jesus to this series of brutalities and rejections? John 19:34 tells us that the Heart of Jesus, broken for our sins, poured forth at that moment both blood (the symbol of his love) and water (the symbol of rebirth to a new life). Even in death, Jesus responded to our baseness with overflowing love and a means to redemption.

Our hurtful actions toward others are likely not usually cruel and murderous … they may just be cruel and mundane. When I respond to another with a harsh word, either to their face or behind their back, I am replaying parts of the Passion. And when I receive another harshly, either by ignoring them or by responding with annoyance, I am failing in my discipleship of Jesus.

So I am rethinking my opinion on interruptions. If they're not in essence annoyances, then for me to respond to them with annoyance is wrong. What if I could recognize them as potential inbreakings of the Spirit and opportunities for me to be a disciple? I think I — and all those I encounter — might benefit from this change of perspective.

I offer to you as well the lesson that this year's interrupted retreat had to teach me: Look on the world with the eyes of love, and let everyone and everything you see — regardless of timing, circumstance, context, or merit — bless you.

[Virginia Herbers is an Apostle of the Sacred Heart of Jesus. She has a master's degree in pastoral studies and has ministered in education at both the elementary and high school levels in Connecticut, New York, Missouri, and Taiwan. Other ministries have included spiritual direction on university campuses, directing the Queen of Apostles Spiritual Life Center in St. Louis, and, most recently, formation and vocation ministry for her community. She currently serves as the vice-provincial for the United States Province of the Apostles of the Sacred Heart, and resides at the Provincialate in Hamden, Connecticut.]