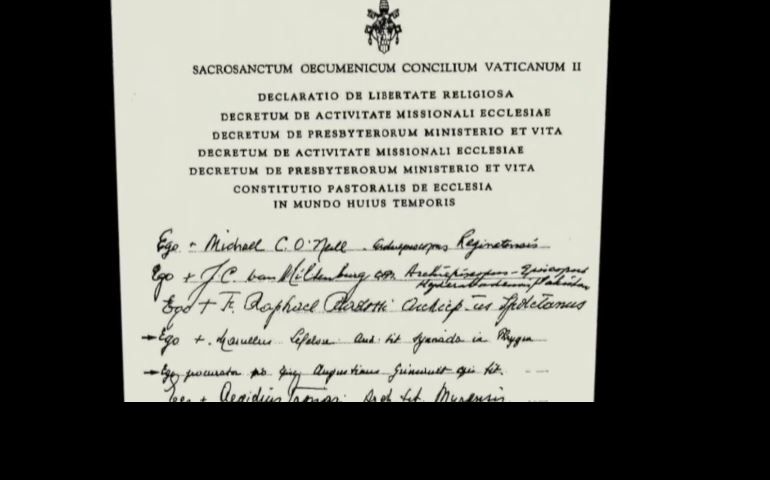 Clip from "The Right to Religious Freedom" video, a production of the USCCB.

Washington — The religious freedom campaign of the U.S. Conference of Catholic Bishops took on a new urgency, wrapped in ominous tones and a foreboding script, in a newly released video.

The nine-and-a-half minute presentation matches footage of grim scenes of hooded and handcuffed captives and violent chaos in unidentified locations around the globe with ominous talk of government "harassment" of and existential threats to religious institutions in the United States.

According to James Rogers, chief communications officer for the bishops, the video was commissioned to commemorate the 50th anniversary of Dignitatis Humanae, the Second Vatican Council's document on religious freedom.

"The document is particularly relevant today, as religious persecution occurs around the world, with Christians targeted in more countries than any other religious group, according to the Pew Research Center," Rogers said in an email answer to questions.

The video also "highlights the issues confronting religious freedom at home," he added, including the Little Sisters of the Poor, one of a number of religious entities whose suits against the government were consolidated in the case of Zubik v. Burwell.

The case is the latest phase of an ongoing dispute between religious groups, most notably the Catholic church, and the Obama Administration over the Affordable Care Act's requirement that insurance plans offer contraceptive services. Oral arguments were heard March 23, and soon after, the court, short one member because of the death of Justice Antonin Scalia, proposed a compromise that was received favorably by both sides. The latest reporting indicates that the religious groups will ultimately agree to a compromise that would resemble in most details an earlier accommodation offered by the administration that would not require religious orders, for instance, to be directly involved in the provision of contraceptives.

Though a segment of the video deals with the heroic work of the Little Sisters with the elderly and dying, and one speaker describes the order as being "harassed" by the government, most of the details of the case are not addressed.

The importance of religious freedom is established at the start of the piece, a project of the conference's Ad Hoc Committee for Religious Liberty, through the words of Prof. Thomas Farr of Georgetown University recounting the value of the established tradition as important not only to religious people but to non-religious as well.

Archbishop Thomas Wenski of Miami, Chair of the USCCB's Domestic Policy Committee, then warns that "without religious freedom, freedom of conscience, all other freedoms, are without foundation" before the scene cuts to a row of waving American flags and a single, somber tone which introduces a more ominous reading of things by Professor Rich Garnett of Notre Dame University Law School.

"A government that doesn't acknowledge limits in its power to regulate religious institutions is probably going to come after other institutions as well," says Gannett. It is but the first of several warnings implicitly linked to current Supreme Court decisions or cases under consideration.

"The government lately has been forcing us more and more to cooperate with its view," says Helen Alvaré, a lawyer and advisor to the U.S. bishops and professor at George Mason University Law School. "But I see that as the flip side of the coin -- of the government stopping us from practicing our faith."

Rev. Eugene Rivers, a Pentecostal pastor from Boston, warned that "rationality is something, an instrument, to manipulate nature, other human beings and reality, which is why we need to have faith."

Enter Garnett again, whose warning that "governments that try to squash religious freedom tend to face political fragmentation, political disunity" is played against a quick cut to a scene of street chaos and what appears to be people throwing Molotov cocktails, as well as crowds, appearing to be represent Muslim people, waving their arms in a public protest. Of the foreign scenes interspersed throughout the video, some of them dramatic portrayals of civic disintegration and oppression, none is identified. No locations are named. But the intended inference is clear: Be warned, this could happen here.

"Political freedom means government is not over-arching and in your face at all times, " says Alvaré. "When religious freedom goes away, there is no transcendent authority, there is only majority will. Then the law is the only norm, and the people in power now are always the only power."

St. Pope John Paul II makes a number of appearances in the video, first as Karol Wojtyla, young expert at Vatican II who contributed to the writing of Dignitatis Humanae, and several later as pope. Francis makes quick cut appearances at least twice, once with a group and another while speaking, it appears, before the United Nations.

As various speakers issue warnings about losing religious freedom at home, including through the Supreme Court decision on marriage equality, the video cuts away in one instance to a scene of unidentified men, blindfolded, handcuffed from behind, facing a stone wall in some enclosure. As Farr declares that "religious freedom is under siege," scenes flash of heavily armed and unformed troops on an unidentified beach, apparently guarding captives, as he notes that one of the symptoms of such a siege "is violence."

Archbishop William Lori of Baltimore, head of the ad hoc committee, said he thinks most ordinary people "are beginning to notice it," presumably the erosion of religious freedom, by understanding that "it is okay in church, [but] don't bring it to work, don't try to run a business according to it, because it's no longer socially acceptable."

"Look at what's happening to Christians in the Middle East," says Lori, as shots of heavily armed forces appear in another unidentified foreign city. "Look at the non-violent but increasing exclusion of religion from the public square," he continued, as the video cuts to a shot of the Ten Commandments monument that was removed last year from the Oklahoma Capitol grounds because that state's supreme court decided it violated provisions of the state constitution.

Noticeably lacking from the video and its discussion of the erosion of religious liberty and religious presence in the public square were the visits to the United States by four of the most recent popes, dating back to Paul VI and including the 2015 visit by Pope Francis.

It perhaps would have been too contradictory of the video's thesis of cultural hostility toward religion and religious institutions to show Francis speaking to a special joint session of Congress, or being greeted at the airport upon arrival by President Obama. There followed several days of public adulation of the pontiff with throngs of people lining streets in Washington, D.C. and New York City and concluding with a huge outdoor Mass and other celebrations on Philadelphia's Benjamin Franklin Parkway, all of it amply protected by law enforcement paid for by the public.

The video, an unrelenting warning, toward the end has Alvaré counseling: "The ones who will lose the most if our institutions close, if our schools can't hire and teach in accordance with this, are already vulnerable … Countries that have religious freedom are also more likely to have freedom of the press, freedom for women, free speech. They travel together because all of them are about whether truth matters at all."

The final scenes roll quickly: a civil rights march, Mother Teresa holding a baby, refugees landing on a distant shore, the Berlin Wall falling and a scene from the March for Life.

Rogers said the video has already received more than 250,000 views.

[Tom Roberts is NCR editor-at-large. His e-mail address is troberts@ncronline.org.]