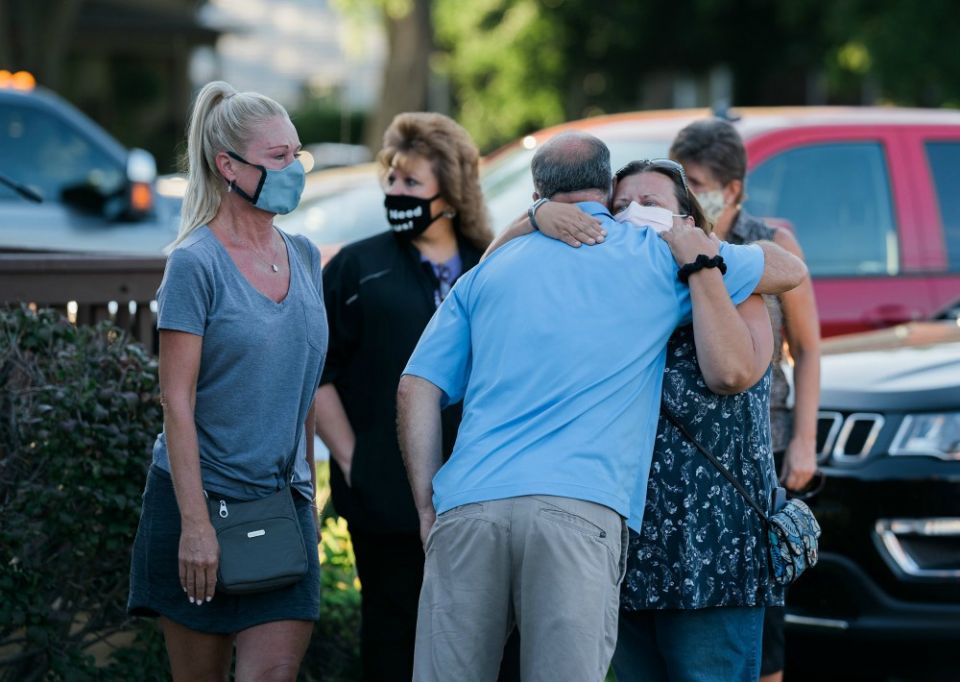 People attend a prayer vigil outside St. Joseph Catholic Church in Trenton, Michigan, Aug. 17, for Robert Chiles, a parishioner, and Fr. Stephen Rooney, St. Joseph's pastor, who disappeared in a boating accident on the Detroit River the previous day. (CNS/Courtesy of Naomi Vrazo via Detroit Catholic)

Grosse Ile, Mich. — Authorities found the body of Robert Chiles, 52, a member of St. Joseph Parish in Trenton, late Aug. 18 after a search of the Detroit River where he and Fr. Stephen Rooney, St. Joseph's pastor, went missing Aug. 16 after Chiles' boat capsized.

Detroit Auxiliary Bishop Gerard Battersby, who led a prayer vigil the night of Aug. 17 at St. Joseph Church, expressed sympathy toward Chiles' family members and friends at the news.

Police believe the accident occurred when Chiles, who owned the 39-foot speedboat, turned and hit a strong wake, flipping the watercraft and sending its 14 passengers overboard.

A passing boat from Ontario rescued most of those on board, including seven children, but Chiles and Rooney remained missing. Among those rescued were Msgr. Charles Kosanke, rector of Detroit's Basilica of Ste. Anne, and Chiles' three children.

According to friends at the prayer vigil, Rooney had befriended Chiles, president of Alta Equipment Group Inc. in Livonia, after the funeral of Chiles' wife, Christine, whose body was found last September in the Detroit River.

Friends and family spoke glowingly of the two men Monday night, saying the two shared a welcoming personality and gave of themselves generously.

"To be treated with the gift of hospitality by Fr. Rooney is to be treated truly like an honored guest," said friend and fellow pastor Fr. Marc Gawronski of Sacred Heart Parish on Grosse Ile, near where the crash took place.

Likewise, "the welcome one receives at the homes of the Chiles family ... is a place where love is shared in a courageous and joyful way," Gawronski told Detroit Catholic, the online news outlet of the Detroit Archdiocese. "Wherever we are, as followers of Jesus, we have men like Fr. Rooney and Rob and his family, people who prepare a place for another."

Funeral details for Chiles, who leaves behind three children, have not yet been set.

At the Aug. 17 vigil, about 300 friends, parishioners, family and others gathered in St. Joseph's parking lot, many wearing masks because of COVID-19, sharing in their sorrows and trying to peel away updates or news, even as the miracle for which many prayed seemed increasingly unlikely.

Battersby struggled to find the words as he led the impromptu prayer service.

"We come together with heavy hearts, but not as a people with no hope," he said. "Even this moment is caught up in the Resurrection, and Jesus is Lord. In this testing, the pain we're feeling, we are giving witness that Jesus is at the right hand of God, gathered in the presence of his mother and all the saints, praying for Fr. Stephen Rooney and Mr. Rob Chiles."

During the prayer vigil, clergy from the Downriver area reflected upon a passage from John's Gospel, in which Jesus tells the apostles he is going to "prepare a place" for them.

As musicians played hymns and people grieved and comforted one another, Margaret Beaudry Comer told Detroit Catholic that she wants people to know Rooney "was the best."

"He exuded Jesus, his soul, his life, his light," Comer said. "I'm not from the parish, but he was with our family at my mother's funeral at Our Lady of Mount Carmel [in Wyandotte]. When he came to family reunions, birthday parties, my mother's house, he was all about love and acceptance and giving his time and love. He just made you feel comfortable, enjoying life and putting God first."

Rooney, 66, was born in Belfast, Northern Ireland, and was ordained a priest for the Cistercian order in 1985, becoming incardinated into the Detroit Archdiocese in 1990.

He served assignments at seven parishes around the archdiocese and in 2018 became pastor of St. Joseph Parish. He was a frequent guest in the classrooms of St. Joseph School, known for his good humor and captivating Irish brogue.

After the vigil, Battersby and support staff from the archdiocesan chancery stayed to answer questions and counsel parishioners. The bishop was scheduled to take over pastoral responsibilities at St. Joseph for the Aug. 22-23 weekend.

You could see Elizabeth's soul, despite outward appearance

Happiness and pain: That's the deal