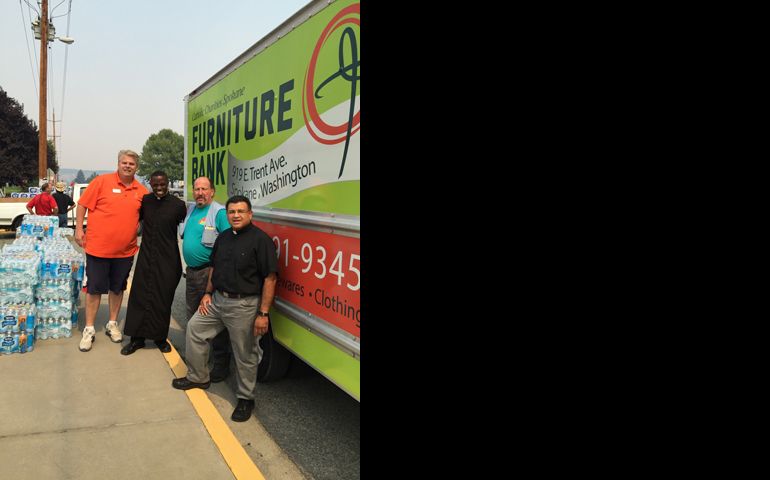 Yakima, Washington — In the wake of this summer's devastating wildfires in Washington state -- including the ongoing Okanagan fire, the largest fire complex in the state's history -- Catholic Charities from all three dioceses in Washington are banding together to provide emergency relief and continuing support, both financial and spiritual, for the fires' most vulnerable victims, migrant farm workers.

"At least 1,500 families have been displaced in the Chelan area alone," said Yakima, Wash., Bishop Joseph Tyson. "There are between 15,000 and 25,000 migrant farm workers* in Washington, in a variety of stages regarding documentation."

Tyson explained that while "those on the front line are trying to help everyone," many of the first responders have "not been equipped to deal with different populations in the fire zones. … For example, it took up to 14 days to get necessary information translated into Spanish." Lines of communication into the remote fire-effected areas are extremely limited, he said, "since there is only one radio station in the region that provides information in Spanish, and only on Sunday afternoons."

John Young, president and CEO of Catholic Charities in the diocese of Yakima, added that "many families don't know the scope of the fire until it is upon them, and they have to flee."

Fr. Rogelio Gutierrez, pastor of St. Francis de Sales parish in Chelan, concurred. "They have no place to live, as there is not much housing in Chelan," he said. "They have no choice but to move. They have lost their jobs as well as lost everything."

Young depicted the extreme difficulty for his bilingual outreach teams in accessing and helping the fire-effected areas. "A lot of these communities are in remote areas; they are literally off the grid," he said. "… There are no advocates for the poor, they have no insurance."

Catholic Charities has provided the families with Walmart gift cards. Gutierrez said that many of the families had already purchased their children's school supplies, which were destroyed along with all their other possessions by the fires. "With Walmart gift cards, they were able to buy school supplies again," he said. "They are living with other families," so their children could start the school year as planned.

St. Francis de Sales parish has also started religious education classes for the children and has offered Masses for the families.

Gutierrez said his parish has also provided field Masses for the firefighters as well as farmworkers. The parish held a Mass for three firefighters who lost their lives. Several firefighters have asked him for icons or blessings, and he gave one firefighter his own "guardian angel icon. It was very meaningful to him."

Tyson, along with other local priests, has also been offering Masses in and around the fields and camps, many on privately owned land.  "Most of these people are temporary workers on H-1B status," he said. "As part of that, the employers provide transportation to the job sites, but not to church on Sundays. So, we go out to them."

"Our parishes have become our first responders" for this population," Tyson added. "Our parishioners are giving in the second collections at Mass."

"From links on parish webpages, plus specific gifts from parishes," Young said, "totaled almost $10,000 so far."

Young added that Catholic Charities USA will be providing more "material assistance, blankets, water, sleeping stuff." While the larger organization is an early responder, the Yakima Catholic Charities "will be here for the long view," Young said.

He said that "the discernable long-term effects" of the wildfires and displacement for the farm workers will not end when the fires are put out. "PTSD, depression, the real fallout" of this disaster will linger long after the embers cool and the smoke clears.

"The three Catholic Charities in the state of Washington have the unique ability to move and act as one organization," said Young.  "[But] how are we serving both the documented and undocumented? Both the English and Spanish speakers? We have a mandate to serve both."

*An earlier version of this story had inaccurate information regarding the numbers of migrants in the area displaced by wildfires.