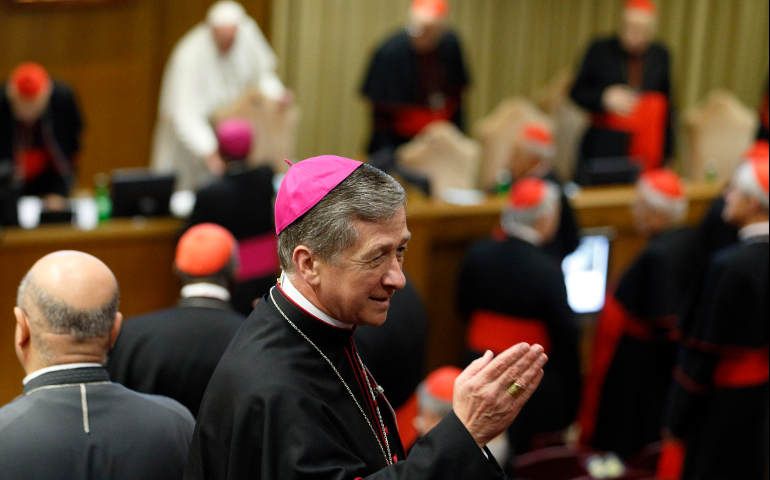 Chicago Archbishop Blase Cupich at the synod on the family at the Vatican Oct. 24, 2105. (CNS/Paul Haring)
This article appears in the Amoris Laetitia feature series. View the full series.

Chicago Archbishop Blase Cupich welcomed Pope Francis’ reflection on marriage and family life released today, saying that while not changing any church doctrine, the apostolic exhortation “makes clear that doctrines are at the service of the pastoral mission.”

Cupich, whom Francis appointed as a delegate to the Synod of Bishops on the family last October, called Amoris Laetitia (“The Joy of Love”) “an authoritative teaching document” that was faithful to what the bishops had approved with a two-thirds majority vote at the synod.

“He demonstrates his closeness to the real lives of people,” Cupich said, “someone who knows the smell of the sheep as he takes up a wide spectrum of the complexity that defines family living in our time.”

Cupich said he found the pope’s candor and honesty engaging and noted how two words are worth emphasizing in the document — discernment and integration.

Describing marriage as a journey, a dynamic path to personal development and fulfilment, Francis speaks of the importance of discernment in those situations in which we fall short of what the Lord asks of us with profound respect for people, the archbishop said.

“The church has to ‘make room for the consciences of the faithful, who very often respond as best they can to the Gospel amid their limitations, and are capable of carrying out their own discernment in complex situations,’ ” said Cupich, quoting Francis’ document.

Cupich quoted again from the document, reminding pastors, “We have been called to form consciences, not to replace them.”

Cupich noted that Francis made no changes to doctrine but the pope “makes clear that doctrines are at the service of the pastoral mission. He also knows that this call for a more compassionate, pastoral outreach, tenderness, compassion, accompaniment, will leave some perplexed.”

Cupich said he was surprised at the breadth of issues Amoris Laetitia covers. Such topic include marriage preparation, proper training of future priests, adoption, family prayer, sex education, the dignity of women and children’s rights.

Cupich said he will consider this document carefully and with his lay and ordained advisors for concrete things to do within the Archdiocese of Chicago.

“Do we need to form teams that are going to help pastors reach out to people? Do we need to look for ways to enhance our marriage preparation program? Is there a program we can put together for families who welcome that first child into the world? I think that this has so many possibilities for us — that should spark our imagination.”

Cupich said the document is easily accessible and “the average Catholic is going to find what the pope is saying is arresting and imaginative. He talks about the need for families to be tolerant so we don’t separate ourselves. They will find a lot to encourage them.”

He described the pope’s language as colorful and highly expressive.

“My first impression is that this very readable text reveals a true pastor, someone who has honed a pastoral sensitivity to priests for more than half a century.

His writing style is crisp and fresh, making the text easily accessible,” said Cupich. “He holds the reader’s attention by the use of imaginative references that range from the Danish film, Babette’s Feast to a sermon by Martin Luther King, Jr. which urges us to see good in every person, even those who hate us.”

During the question and answer period, Cupich was asked about women in the church and he said there was an enormous role for women in leadership positions within the church, and they serve as administrators, but the document was not about women being priests.

Cupich was asked about what to say to people who really wanted a change or who left the church.

“I think there’s an approach here that doesn’t require a change in doctrine, because the doctrine has always been one of mercy and compassion and the pope is recovering that in a much stronger and forceful way,” he said.

“I think that it is part of the doctrine of the church to reach out with compassion to people, and that’s where the pope is making a great contribution recovering something we perhaps may have lost sight of.”

When asked about divorced and remarried people, and gays in the church, Cupich said he has had discussions representatives of these communities since he arriving in Chicago to get to know their lives. “I have found that those conversations are really great starting points for having them be accompanied as individuals. I think that’s what the pope is asking us to do here.”

“The pope has made clear that the role of formation of consciences and not replacing them is for all Catholics, it’s not just for people who are in situations of being divorced and remarried,” he said. “I think that’s a very liberating part of the document because what we see here is that the pope is really calling us to an adult spirituality.”

[Elizabeth A. Elliott is an NCR Bertelsen intern. eelliott@ncronline.org.]