Editorial: US church leadership is in transition 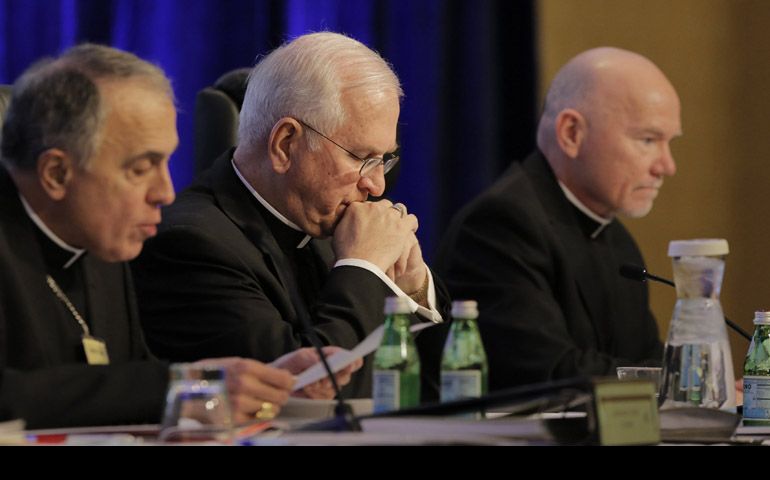 In Florence, Italy, last month, Pope Francis addressed the Italian church and gave a bracing, 50-minute exhortation on how integral change is to a healthy life of the church.

"Before the problems of the church, it is not useful to search for solutions in conservatism or fundamentalism, in the restoration of obsolete conduct and forms that no longer have the capacity of being significant culturally," he told the gathered clerics and laypeople.

At another point, he said, "Christian doctrine is not a closed system incapable of generating questions, doubts, interrogatives -- but is alive, knows being unsettled, enlivened. It has a face that is not rigid, it has a body that moves and grows, it has a soft flesh: It is called Jesus Christ."

It was one more item in a persistent litany of invitations that Francis has offered the entire church -- but most specifically his bishops -- to a freedom that presumes a willingness to wrestle both with the demands of the law and human realities that expose the law as inadequate to many circumstances at hand.

Less than a week later, the U.S. bishops gathered in Baltimore, and it seems the invitation was overlooked by many, perhaps ignored, and even, among some, feared and rejected. During three days of deliberations, the leaders of the American church considered priorities and plans for the future and a political document intended to guide Catholic voters.

What the American church received for the effort was a stale offering of old documents, largely ineffective in their previous iterations and sounding today, in parts, embarrassingly tone-deaf to current realities.

The conference is quite evidently stuck in a long transition between differing papal priorities and styles. Those who are enthusiastic about the transformation Francis is leading realize that institutional change takes time. On many of the most compelling issues, they simply do not yet have the votes to move beyond the rigid formulations of past decades.

It is understandable. The conference is still top-heavy with bishops formed by or conforming to the expectations of Pope John Paul II, whose ecclesiological preferences were largely unchanged during the reign of Pope Benedict XVI.

John Paul favored loyalty of the sort that raises no questions or challenges. The church under John Paul became a highly juridical exercise with strictly drawn lines, a tick list of orthodoxies and "non-negotiables." Under that regime, it was easy to detect who was inside or outside the institution, and that distinction was held as highly important. John Paul had no tolerance for questions that he alone deemed out of bounds.

The rigidity of that neat and tidy church, a high-employment zone for canon lawyers, was its undoing. It cracked under the force of tremors emanating from the corruption of the clergy culture and the devastating sex abuse and money scandals. It cracked because it could not withstand the pressures that derived from everyday existence, where the life of faith is not lived in constant consultation with the law.

The rigidly drawn borders, merciless in their judgment of the unworthy, kept people out. They couldn't, however, hold in those who became disgusted with the corruption or those who became disenchanted with faith by fiat. The model was unable to hold so many young who viewed the church as irrelevant to their lives. Little in the way of invitation was offered to the alienated.

Francis understands that the future of the church rests not in its application of the law, nor in a resort to old forms and practices, as if they hold some magical path to salvation.

He understands that the future of the church is relational, human-to-human, ultimately together forming that "body that moves and grows," that "has soft flesh," and that "is Jesus Christ."

Francis is not a rupture with the past and does not represent "a hermeneutic of discontinuity," a Benedict construction that is repeatedly misused to continue applying old, unyielding disciplines.

Francis represents an overdue correction of deep maladies within the church. He understands the need to dismantle the most destructive elements of the clergy culture that has so scandalized and compromised the church in recent decades. He knows to be suspicious of the overly pious, as he recently put it, and of those who would turn Catholicism into another expression of religious fundamentalism.

Changing the church on a national level will be a slow process, built on both persuasion and attrition of the current leadership. The upside of the moment is that bishops convinced of the direction Francis is leading the church need not wait within their own dioceses.

It is most important that such bishops deal quickly and compassionately with young priests who didn't sign up for the Francis vision and may be resistant. Bishops should also attend closely to seminarians who may be struggling to keep their balance amid the fresh winds blowing in the church.

Finally, they should go out of their way to articulate to their people the idea of semper reformanda, that the church is constantly reforming and that the changes they see under Francis are essential to the long-term health of the Catholic community. Debate and struggle over the important issues are not what scandalizes the Catholic faithful.

Francis' approach should have the ring of familiarity to anyone who wanders through the stories of our sacred texts and is taken with Jesus' risky encounters with the masters of the law of his own time. His answers always tended toward a religious freedom more dependent on relationships than the law.

The bulk of U.S. bishops today were trained to be good border police, and for more than 30 years, they performed that task with great diligence. Francis seems to be saying that perhaps that work of making sure the lines were clear and straight and the corners squared went a bit too far.

It is time now for an equally industrious campaign that demonstrates God's mercy, that emphasizes encounter with others. It is time, perhaps, for gathering in, a task during which the borders may become a bit blurred.

Editorial | Editorial: US church leadership is in transition

Once Pope Francis knows US capitalism, he will love it, says Catholic theologian-economist

Sainthood rites for John Paul II, John XXIII to be beamed around the world