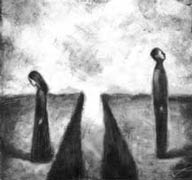 Last May my wife left me. Packed up the car and drove with her father back to California, where we had been living prior to our relocation to Washington, D.C., for my job. We have been living on separate coasts since then, in separate lives, in separate realities. The only thing that binds us is the fact that we were married in the church and are still married, although neither one of us wears the gold bands that we had custom made from a small jewelry shop in Berkeley. I remember how excited we were when they were finished, trying them on and showing them off as we walked down the street arm in arm, even though they were very simple. Now, nothing is simple. Not our relationship, not our future, not our finances, and not our emotions as we try to make sense of the past several years.

Writing in The New York Times last December about the complexity and fragility of marriage, Elizabeth Weil suggested that what ought to be sought after and prized is not the perfect marriage, but the “good-enough marriage.” This is a marriage that has transcended the early insistence on happiness and romantic passion. The ultimate goal of a good-enough marriage is not happiness but psychic health. A good-enough marriage, Weil believes, allows the spouses “to keep growing, to afford them the strength and bravery required to face the world.” This concept reflects lived experience and is reminiscent of Martin Buber’s idea that love is not a feeling but a responsibility. Weil believes that to measure marriage against anything other than this is not only naive but demeaning.

The ability to face the world is a defining characteristic of adulthood and crucial for marriage, but wholeness itself cannot heal the wounds that are often inflicted in marriage, turning one spouse against the other and creating enmity where there ought to be genuine love. As Weil acknowledges, “Marriage can bring out people’s worst. Even those who are tolerant, wise and giving are often short and rude to their mates.”

This is certainly not lost on me and countless others hunkering down as the gale winds of divorce whip around them like an emotional Katrina. Nonetheless, I still feel called to something greater, to something beyond my personal happiness and well-being. I want to know that my effort -- our effort -- is part of a greater experience and that the failures, successes, joys, and sorrows count for something.

There is another goal of marriage and that goal, quaint though it may seem, is holiness. Holiness is a response to the call to transcendence and begins with the recognition of unholiness. In marriage, holiness involves not only acknowledging the negative effects of sharing bed and board with another person (e.g., enmity, anger, resentment), but doing so for the sake of the other person. Without this openness, the disclosure of what may lie festering beneath the surface of the relationship, the marriage will die. The commitment required for a serious relationship can begin in earnest only when broken dreams are expressed in a way that acknowledges not just each partner’s psychological imperfection but spiritual sin. In other words, I have to admit my role in the tragedy that led to the car ride back to California and ask for God’s grace to do so, because I cannot do it on my own.

The American bishops’ 2009 pastoral letter “Marriage: Love and Life in the Divine Plan” calls married couples to a “deeper holiness of life” in the same way that Christ calls the church to holiness. It identifies holiness as the “heart of the vocation of marriage,” in which spouses forgive one another and “bear one another’s burdens.” Holiness is not a pious abstraction but an encounter with Christ’s purifying love in the crucible of relationship. This is why the letter stresses “common courtesies” like “fidelity, kindness, communication and mutual assistance.” These may be so obvious that they do not seem worth mentioning. Yet, they are often taken for granted in the daily grind of life, and it is only after things start falling apart that one realizes that marriage is work, that relationships are not indestructible, and that spouses cannot just expect to receive these courtesies -- they must give them freely, knowing that they have a partner who is there for them no matter what.

Gratitude is a word that appears repeatedly in the pastoral letter. Gratitude is part of holiness and born of humility. It is a way of life, a spirituality in which the individual comes to see everything as a gift and precious. But since the gift in marriage is a living, breathing person with foibles and imperfections and behavior that can slip into the discourteous, gratitude does not come easy. Sharing space may be the greatest challenge human beings face, not just in the church but in the global community. Yet it seems that if we could just get marriage and relationships right, the rest would fall into place.

Which brings me back to my situation and the real work of marriage that must be done once the honeymoon is over, when the battle for power and control switches from space to time to sex to family to money and then back again. It is marriage in the second act, when the spouses are most vulnerable and God’s grace most needed. When the church must stand with married couples to help them express the fears that, if ignored, will sooner or later tear the marriage apart. The virtue of holiness that gives marriage its transcendent meaning is impossible to attain unless these fears and doubts are given voice. They form the raw material of the marital bond because the couple has pledged not to give up, to stick it through to the end when, through blind determination, God’s grace, and luck, fear gives way to a partnership that is “good enough.”

The bishops’ letter does not address how marriages become holy, how husband and wife should not give up once problems appear and each faces the rather cold fact that the person lying next to them is just that: a person. But this is desperately needed by so many couples and where the church can do the most good. This is marriage in the second act, marriage as a negotiated truce between two warring factions that have every intention of creating a life together but few of the skills to do so. The immediate reaction is to separate, divorce, pack up the car and head west, leaving the old world behind. But that is a disaster for everyone: my wife, me, the bishops, the church, and all of those dreams that never came true. It’s not a pretty picture, but then divorce, like marriage, is never what you think.

[Robert Brancatelli is a visiting professor in the Graduate School of Religion and Religious Education at Fordham University in New York. He is working on a book on marriage and relationships.]

Pope tells young to 'swim against the tide; it's good for the heart'