NJ priest found the core of his calling, from the laity 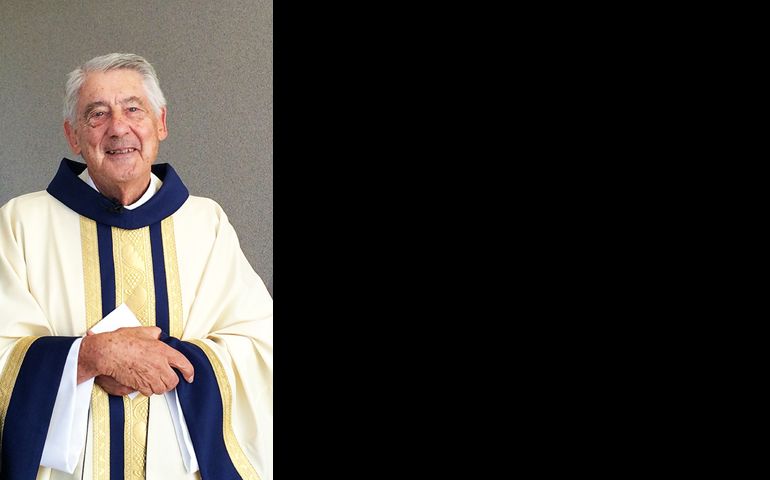 In the mid-1980s, St. Mary Parish in Colts Neck, N.J., had developed a reputation as a refuge for Catholics weary of lifeless communities, stale liturgies, and thoughtless, rambling sermons. It was one of those parishes that let you know, the moment you walked through the church doors, that something was different.

Actually, lots of things were different at this central Jersey parish, and one of the first and most noticeable was a welcome. Someone almost always welcomed you, especially if you were new.

A joy permeated the place. People wanted to be there. The longer one stuck around, the more apparent that a lot of them were here -- on the church grounds, in the community buildings on the campus -- a lot more than just on Sunday. Ministries were abundant, as were education programs for young and old alike. The education programs were first-rate, and a parish library was well-stocked and heavily used.

Much of this -- the work, the atmosphere, the heavy lay involvement -- could be traced to the pastor, Fr. William Bausch, who led the parish from just after the church was dedicated in 1972 until 1995. His approach could be traced to a highly formative experience early in his priesthood. During an observance of his 60th anniversary of ordination in June 2014, he recounted that experience in a homily delivered at several churches where he had previously served as pastor or associate.

As a young priest in the 1960s, while serving at St. Joseph Church in Keyport, N.J., he was assigned to be the chaplain to a Christian Family Action group (known as Christian Family Movement in most dioceses). One of the rules of the lay movement required that he be silent until the meeting ended.

"I remember that they made me sit on my hands because if I can't use my hands, I can't talk. I was never so humiliated and humbled in my life," he said in his homily. "Not because I had to sit on my hands but because, forced to be silent for two years, I had to listen, really listen, to their stories of how, day after day, they struggled to be good Christians. Month after month, I listened to them struggling inwardly with shady practices at the company at which they worked, the politics of the workplace, the compromises they were forced to make, the fear of losing their jobs, difficulties with children -- school, rebellion, drugs -- trying to make ends meet, hardly ever getting a vacation, trying not to lose faith in hard times, struggles with prayer, not feeling God's presence, doubts."

As Bausch listened, he "began to realize what a privileged, innocent life I led," he said. "Gradually, I began to realize with some guilt that I would always have a job no matter how poorly I performed. I had no accountability to the people. I could go home that night and get a full night's sleep with no colicky baby or sick child to attend all night. I would take my scheduled vacations and not have to pinch pennies. In short, I began to realize that these people were the saints on the front line. I began to feel I was not worthy of them. I knew in my sinking heart I was incapable of their heroism."

Bausch, 87, is an accomplished homilist, storyteller and author, who retired as pastor in 1995 after 22 years at St. Mary and since has devoted much of his time to writing (he has more than 30 books to his credit) and speaking on pastoral matters and spirituality.

Through his tenure as chaplain, said Bausch, "I knew I had found my priesthood's core: that they, the laity, would teach me, not only the other way around."

This "profound sense of reverence and respect" for the lives and gifts of laypeople deeply affected his approach to being a pastor. "I made it clear to the people from day one that I was there to promote and call forth the gifts and charisms they already had, to teach them who they were as a people of God, to support and learn from them, to make them aware that this was their parish."

He said he made his parishioners aware that he was "temporary and would leave some day, but they were permanent. … I was sent there to serve, to remind them who they were. I never failed to consult them. The Keyport experience had defined my priesthood."

Membership in the community at St. Mary was not a matter of cheap grace. Members were required to sign a covenant in which they promised "to walk faithfully with our fellow parishioners … to worship with them regularly and to make some commitment of Christian service, however temporary, as described in the parish booklet."

Part of the genius of Bausch's approach was planning -- far in advance and in great detail. He knew he could ask someone if they'd be available to do something months away. Who could say no? That something was often a small job that led to bigger commitments.

He was also aware of the time demands on his parishioners, many of whom commuted daily to New York. He was adept at designing jobs that did not loom as endless commitments, and he kept rotating leadership in certain areas so that wide sections of the community felt ownership in the place.

Each month, he would invite a couple or two for Saturday evening cocktails and a dinner he had prepared. They were great intelligence-gathering sessions as well as social gatherings, allowing him to learn more about people's interests and skills.

From that information, one might receive a letter of invitation (an actual letter, pre-Internet) to consider participation in a ministry or some work that needed doing around the parish.

In his anniversary homily, Bausch referred to the expression "Inside of every old man is a young man asking, 'What happened?' "

The answer is clear, he said: "Grace happened."

He considers his hands, with an "arthritic crooked finger -- symbol of all of my imperfections, shortcomings and sins -- and marvel as I think of all the children over whom they poured the baptismal waters. I think of over 60 years of signing the cross over repentant sinners, pressing the healing oils on the foreheads of the sick, offering the sacred host to nourish the yearnings of pilgrims joining other hands in matrimony, holding the hands of those in excruciating pain or grief or despair, and, not the least of which, gesticulating to urge on the homiletic word, the point in the classroom, the lecture, the conferences -- thousands and thousands of them -- or to tap the keys that eventually morphed into books."

All of it, he says, "becomes a symbol of an undeservedly graced priesthood."

[Tom Roberts is NCR editor at large. His email address is troberts@ncronline.org. Roberts was a parishioner at St. Mary Parish for a period while Fr. William Rausch was pastor.]

Parish | NJ priest found the core of his calling, from the laity

Francis: Spirit works in laypeople, 'is not property of the hierarchy'