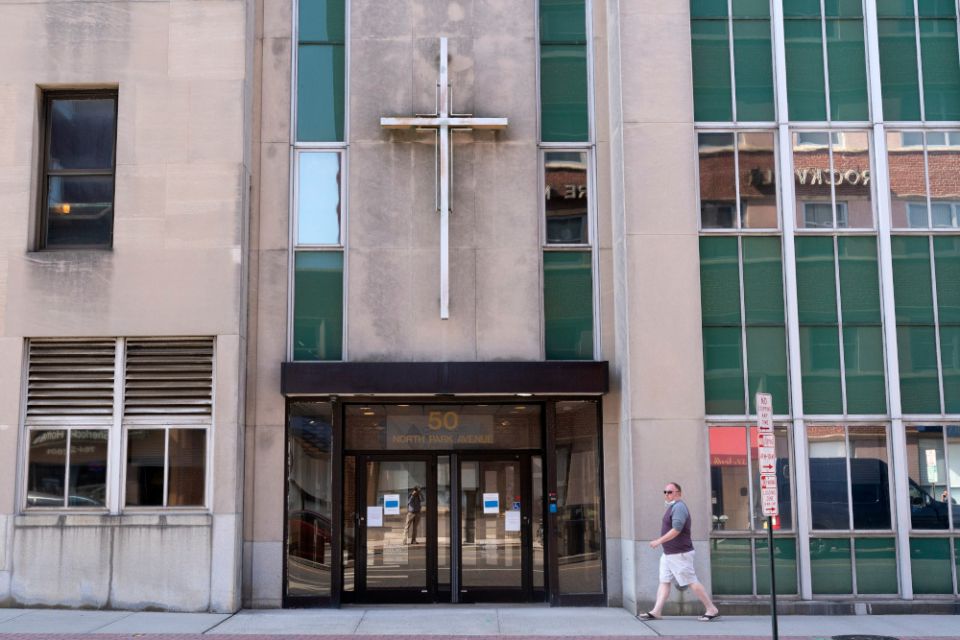 A man walks by the offices of the Diocese of Rockville Centre Oct. 1, 2020. Rockville Centre was the fourth New York diocese to file for bankruptcy because of financial pressure from lawsuits over past sexual abuse by clergy members. New York's extension to file civil lawsuits to allow victims of childhood sexual abuse to sue ends Aug. 14. (AP Photo/Mark Lennihan)

A Roman Catholic diocese in New York City's suburbs Thursday became the largest in the U.S. to declare bankruptcy, seeking relief from a torrent of lawsuits filed after the state suspended the statute of limitations for suing over sexual abuse by priests.

The Diocese of Rockville Centre, which encompasses much of Long Island and 1.4 million Catholics, said in filing for Chapter 11 protection that it will ask a bankruptcy court to put all cases on hold so that they they can be settled together — a process it says is more equitable but that victims say limits their ability to get at the truth.

“The financial burden of the litigation has been severe and only compounded by the COVID-19 pandemic,” Bishop John Barres said in a video and letter on the diocese's website. “Our goal is to make sure that all clergy sexual abuse survivors and not just a few who were first to file lawsuits are afforded just and equitable compensation.”

More than 200 lawsuits have been brought against the diocese since the 2019 passage of a New York law that gives victims the right to sue over decades-old sexual abuse by clergy members, teachers and other adults. Previously, the statute of limitations in the most serious such cases ran out when the victim turned 23.

The Diocese of Rockville Centre fought the law in court, arguing it was unconstitutional. When a state appeals court last month refused to halt such lawsuits, the diocese said it had no choice but to file for bankruptcy.

In its filing, the diocese listed up to $500 million in estimated liabilities from lawsuits.

“What became clear was that the diocese was not going to be able to carry out its spiritual, charitable and educational missions if it were to continue to shoulder the increasingly heavy burden of litigation expenses associated with these cases,” Barres said in announcing the bankruptcy.

John Schratwieser, who alleges a diocese priest abused him about 40 years ago, said the filing seemed like “an easy way for the church to get out of claiming full responsibility for what happened.”

"This is legalese and this is corporate protection," Schratwieser said. “This has nothing to do with the teachings of Jesus Christ.”

Janet Klinger, the head of Long Island chapter of the Survivors Network of those Abused by Priests, was skeptical of the diocese's need for bankruptcy protection. She said other dioceses have cried poverty while squirreling away assets to keep them out of creditors' hands, such as Milwaukee, which was able to shield $50 million in a cemetery fund.

“Based on history, it is clear that church officials use bankruptcy court not because of indigence, but out of fear,” said Klinger, who said she is also a victim of abuse in the Rockville Centre Diocese.

The New York law gives people until next August to sue over long-ago allegations. Three other dioceses in the state filed for bankruptcy within the last 13 months: Syracuse, Rochester and Buffalo.

Last year, dioceses in Guam and Harrisburg, Pennsylvania, filed for bankruptcy, and in May, it was the Archdiocese of New Orleans. In all, about two dozen dioceses or archdioceses in the U.S. — including Portland, Oregon; San Diego; and St. Paul-Minneapolis — have sought such protection in the face of lawsuits over sexual abuse since the early 2000s.

The Rockville Centre Diocese started a compensation program in 2017 for victims of sexual abuse, and so far it has paid more than $62 million to about 350 people, officials said.

Across the U.S., Catholic dioceses have paid out about $4 billion since the 1980s because of sexual abuse. Recently enacted lookback laws in more than a dozen states, including New York, could result in thousands of new cases against the church and at least $4 billion in additional payouts, the Associated Press has estimated.

Barres said most of Rockville Centre's operations will continue despite the bankruptcy filing. He said that employees and vendors will be paid and that parishes and schools are separate legal entities not covered in the bankruptcy filing. In other places, bankrupt dioceses have shed jobs and sold off properties to cut costs and fund settlements.

The Associated Press generally does not identify people who say they are victims of sexual assault unless they consent to being identified publicly, as Schratwieser and Klinger have done.