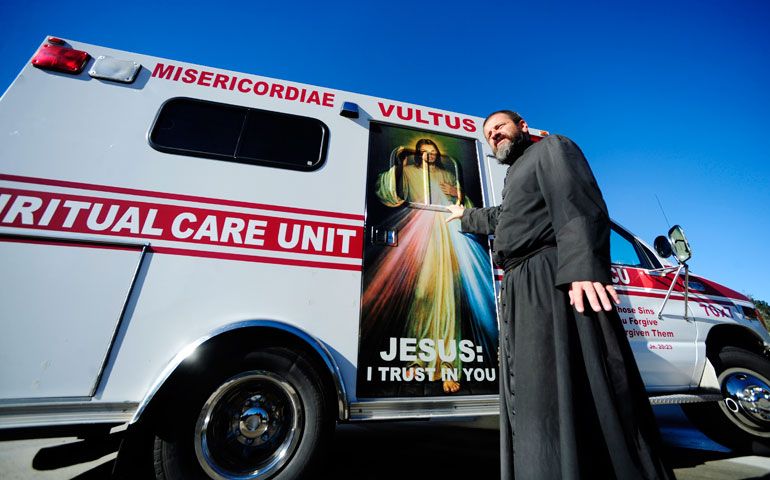 Fr. Michael Champagne talks about the Spiritual Care Unit, a mobile confessional made from a former ambulance, Nov. 23 at the Community of Jesus Crucified in St. Martinville, La. (©2015 The Acadiana Advocate/Leslie Westbrook)
This article appears in the Holy Year of Mercy feature series. View the full series.

The Year of Mercy began Dec. 8, and churches and church organizations across the United States have special observances and services planned throughout the year.

Churches across the U.S. have been designated as pilgrimage churches, and one parish per diocese will open a designated "Holy Door" like the ones Pope Francis opened in Central Africa Republic and St. Peter's Basilica in Rome. All four basilicas in Rome have had their Holy Doors opened.

The Lafayette, La., diocese has taken a unique approach with the introduction of a Spiritual Care Unit, a transformed ambulance that serves as a mobile confessional. Equipped with a kneeler and screen, the confessional will roll down streets throughout the diocese. People will have an option of confessing face to face or anonymously, just as in church. The Divine Mercy Chaplet will be available, and spiritual music will play on the PA system while confessions are being heard.

Community of Jesus Crucified Fr. Michael Champagne told NCR he's been trying for years to acquire a used ambulance for the purpose of a mobile confessional and this year he was able to purchase one off eBay with the help of a benefactor.

Champagne said Lafayette Bishop Michael Jarrell blessed the confessional Nov. 12. It has already been put to use at a retreat in the woods for 86 men and before a Catholic school football game.

"We also have scheduled some of our Catholic schools and plan on having it at our homeless shelter, at the mall during Advent, and at other gatherings both religious and secular," said Champagne.

"The idea is not to cater to laziness or to cheapen the value of the sacrament, but rather to give greater access and availability of the sacrament to those who may have been away for some time," he said. "We have already experienced persons who were away for decades from the sacrament returning home."

Parishes in the diocese of Dubuque, Iowa, will perform one corporal work of mercy for a period of seven weeks. Each parish community can choose its own service project to fit the work of mercy for each week or it can follow one of the diocese's suggestions. The first project will begin Jan. 17 and will focus on giving drink to the thirsty.

In New Ulm, Minn., the Church of St. Mary will host a human trafficking workshop in February as part of that parish's project for the Year of Mercy to consider the corporal work of visiting the imprisoned. The workshop will teach attendees how to support survivors of human trafficking, as well as to identify human trafficking in various industries.

Francis has called for mercy for those who had abortions, and the New Orleans archdiocese is placing a special emphasis on healing with support and counseling this year.

Several private companies are organizing pilgrimages, and include trips to the four major basilicas in Rome; a trip to St. Jeanne Marie in Ars, France; and an opportunity to follow in the footsteps of Pope John Paul II and St. Faustina through Poland. Faustina was a Polish nun who wrote a diary of revelations about God's mercy.

Philadelphia, which hosted Francis and the World Day of Families, will host a pilgrimage to the National Shrine of the Basilica of the Immaculate Conception of the Blessed Virgin Mary in Washington, D.C., on April 23.

The Catholic Social Ministry Gathering will take place in Washington Jan. 23-26 and will focus on ecology. The gathering is organized by the bishops' Department of Justice, Peace and Human Development with four other departments of the U.S. Conference of Catholic Bishops and 16 national Catholic organizations. The 2016 conference theme is "Called to Live Mercy in Our Common Home."

Also, Our Sunday Visitor has an app called 365 Days to Mercy that has a calendar of jubilee events, information on the works of mercy, indulgences, daily readings and more. [Android or IPhone]

There are several jubilee celebrations scheduled at St. Peter's Basilica in Rome, including sending forth the Missionaries of Mercy in February, a jubilee for boys and girls in April, and a jubilee for the sick and disabled in June. World Youth Day takes place in Krakow, Poland, in July.

[Elizabeth A. Elliott, is an NCR Bertelsen intern. Contact her at eelliott@ncronline.org.]

The boundless nature of God's mercy