US church eyes potential of the 'internal forum' 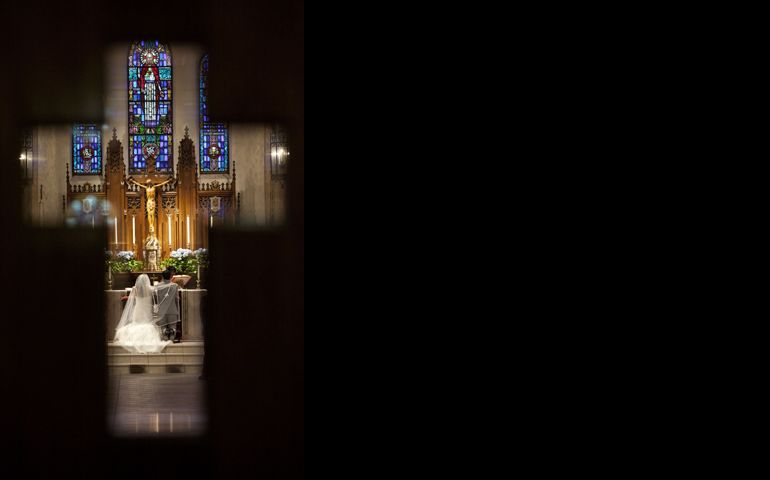 At the close of the Synod of Bishops on the family Oct. 24, NCR reported that the synod's final document "recommended softening the church's practice toward those who have divorced and remarried."

The three paragraphs in the final document that dealt with this issue "seems to significantly move decision-making for how [divorced and remarried Catholics] can participate in the church to private conversations in dioceses around the world," NCR reported.

The document itself said, "The conversation with the priest, in internal forum, contributes to the formation of a correct decision on what is blocking the possibility of a fuller participation in the life of the church and on steps that might foster it and make it grow."

Using the "internal forum," the document says, priests can help remarried Catholics "in becoming conscious of their situation before God" and then deciding how to move forward.

NCR's reporting, however, also pointed out that ambiguity in the text would mean that different interpretations would likely arise.

That is what NCR found in interviews with U.S. priests and church personnel who work with married, divorced and remarried Catholics.

Depending on whom you ask:

Fr. James Coriden, a retired professor of canon law from Washington Theological Union, describes the internal forum as "a moral decision-making process rather than a canonical or judicial process for people who have experienced the tragedy of divorce and have come to a sense of repentance and desire for the sacraments despite the fact that they are in a second marriage and who cannot or will not avail themselves of the annulment process."

Fr. Robert Ruhnke, director of Marriage Preparation Resources, an online resource, believes internal forum is a useful tool. He shared a case with NCR of what an internal forum case might look like.

"Carl and Elizabeth were a couple in their 80s and wanted to get their marriage validated because they were previously married. There were no witnesses alive to testify in an annulment and [Carl and Elizabeth] were able to receive assurance that everything would be fine. We got them a Catholic marriage certificate and they continued on with life."

Another example he uses is that of Frank and Sue, who divorced and remarried other people. They didn't get an annulment. Frank and his second wife became involved in the church and wanted to receive Communion.

They talked to the priest about the situation. "He and his new wife are receiving Communion and no one is asking questions," said Ruhnke. "Frank called wondering if getting a new pastor would cause a mess and I told him that all the new priest knows is he is very involved in the parish."

Some say that if the annulment process is streamlined, the use of internal forum may not be relevant.

"It seems like one of the things they are going to do is make the annulment process more efficient," said Ruhnke.

Peg Hensler, associate director of the Department of Youth, Marriage and Family Life for the diocese of Trenton, N.J., said she hopes the annulment process is improved. She told NCR, "Anything that will assist couples through this painful and difficult process we believe in the end will be much better for the person."

Kevin Eckery, spokesman for the diocese of Sacramento, Calif., said that most dioceses are formulating guidelines based on the Vatican documents when it comes to annulments, rather than considering internal forum at this time.

Fr. Michael Ryan, pastor of St. James Cathedral in Seattle for 27 years, has dealt with couples using the internal forum. "I've always tried to make the very best use of the church's law, which can be helpful, can be merciful and even be freeing for people to go through the external process of annulments. But for some cases, it's simply a punishing process and it sometimes ends nowhere."

Youngstown, Ohio, Bishop George Murry, who participated at the synod on the family, told NCR he has "encouraged people in irregular marriages to utilize the expedited annulment process inaugurated by Pope Francis."

Some dioceses NCR contacted are waiting until the pope's final document on the matter. Lisa Arriazola, assistant to the tribunal director in the San Antonio archdiocese, said that Msgr. Terry Nolan, judicial vicar, had not received calls about internal forum.

"We expect that we will receive calls," she said. "However, until the Holy Father releases his statements, we will not be providing any information without the certainty of changes."

The same is true in the diocese of Brownsville, Texas, where Fr. Oliver Angel, director of the Judicial and Diocesan Tribunal Office, said they are also waiting for final guidelines from the Vatican.

In Helena, Mont., Fr. John Robertson, judicial vicar, said he had not received any calls, but if he did, "we would refer them to their pastor."

No matter what new guidelines come from Rome, it will take some time to train priests and pastoral ministers. The topic has been taught in seminaries in the past, though Ruhnke suspects it is not taught as much now.

"When I was in the seminary, we learned a lot about internal forum," he said. "It was more important a long time ago when there weren't options for annulments back in those days."

He said that in the late 1960s and 1970s, annulments were beginning to happen and the bishop in Beaumont, Texas, released a letter encouraging the priests to look up people in this situation and help them get reconciled with the church through internal forum.

"At a national family life directors conference two or three years ago, a canon lawyer said there was no need for internal forum," said Ruhnke. "At the same time, tribunals have gotten easier to work with."

Coriden said internal forum was taught in some seminaries and not others, as it was "one of those disputed moral processes," like if someone confesses to using contraception. "The teachings on things like that vary from place to place."

Ryan said that those ordained within the last 30 years have a different mindset and might not be as willing to embrace internal forum. "If the church is going to embrace it, then the church ought to be providing them with steps to understand this and open their minds to it," he said.

"If this is truly something that has a place in the life of the church, and the bishops seem to be saying that it does, then we ought to help awaken people to this," he said.

Fr. Thomas McCarthy, a priest at Blessed Sacrament Parish in Warren, Ohio, told NCR that local bishops can prepare pastors to use internal forum, recognizing that it has been part of practice for years, and talk about it in clergy conferences or clergy support groups.

"What a clergyman is encouraged to do is to help a couple explain their situation to them and it's the couple that has to make the decision," he said. "It's an individual choice and the person has to conscientiously look at their state and their situation and what they choose to do and think is right before God."

Ryan said that when he was a young priest, he wasn't educated about internal forum. "It was always under the radar," he said. "It was often from canon lawyers from a pastoral bent who realized the limitations of the system."

Ryan said he thinks priests of his generation who were formed in the Second Vatican Council "already have the pastoral insights for the whole thing coming out of the synod. It fits into our way of thinking. It is consonant with what we thought was the right thing all along."

He said it's not that they're loose with the law, but "it's more that we try to engage with people and realize there is something about the primacy of conscience when all is said and done."

Hensler told NCR she did some work in the area when working on her master's thesis and learned from a priest in her diocese who told her that "everything has to be done in the external forum. There is no such thing as an internal forum solution recognized in the diocese. That was a few years ago and nothing new with the synod would change that at this point."

"I don't want anyone to not be able to be sacramentally married. My goal is to help parishes identify couples in irregular situations and invite them into conversation and see what's going on and is there any way that we can assist them through this process."

Parish | US church eyes potential of the 'internal forum'

Pope Francis, Cardinal Kasper, and the Eucharist as medicine

The next schism is already here