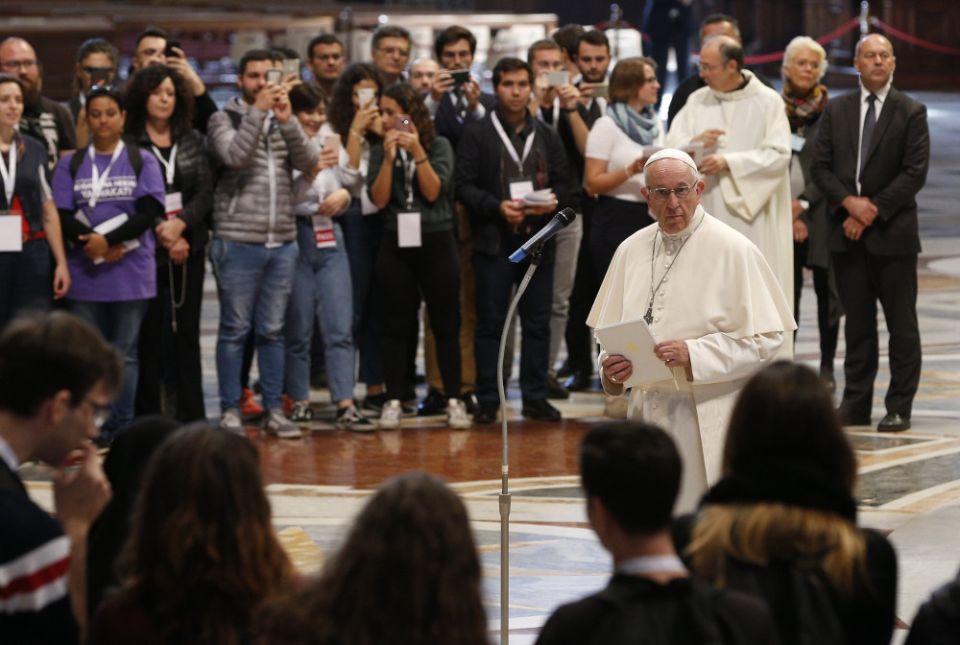 Pope Francis prepares to address young people who participated in a pilgrimage hike from the Monte Mario nature reserve in Rome to St. Peter's Basilica at the Vatican Oct. 25, 2018, during the Synod of Bishops on young people, the faith and vocational discernment. (CNS photo/Paul Haring)

Washington — Catholics across the country continue to feel wounded by the clergy abuse crisis, seek a more welcoming church in which their "lived reality" is prioritized over rules and regulations, and desire lifelong spiritual, pastoral and catechetical formation as disciples, according to a report synthesizing the 10-month synodal process in dioceses.

Participants in the process also expressed concern that the U.S. Catholic Church is deeply divided and that a lack of unity exists among the bishops, spoke of a desire to "accompany with authenticity" LGBTQ+ individuals and their families, and voiced hope that laypeople's gifts would be more widely utilized in a spirit of collaboration throughout the church, the report said.

Released Sept. 19 by the U.S. Conference of Catholic Bishops, the report summarizes the concerns, hopes, pains and desires voiced by an estimated 700,000 participants who joined thousands of listening sessions and other events during the diocesan phase in the lead-up to the Synod of Bishops on synodality in October 2023.

There are roughly 66.8 million Catholics in the U.S., according to the report, meaning more than 1% of Catholics participated in the listening sessions.

"The listening is an opening movement toward a wise discernment locally, regionally and nationally about what our deepest concerns, our deepest hopes are right now at this moment in time," Bishop Daniel Flores of Brownsville, Texas, who is overseeing the U.S. involvement in the synodal process, told Catholic News Service.

Flores, who chairs the USCCB's Committee on Doctrine, said the process that has unfolded since October -- and led to the 16-page synthesis report sent to the Vatican -- enabled people to respectfully listen to each other and develop a new understanding of what life in the church can be.

"It's an important step that gives us an experience as a local church," Flores said. "That's why I think it's always important to see that this is a seed that is planted and has a chance to grow. I think that's what the Holy Father is asking for us."

Titled "National Synthesis of the People of God in the United States of America for the Diocesan Phase of the 2021-2023 Synod," the report was prepared in advance of the Synod of Bishops called by Pope Francis.

The synod's theme is "For a Synodal Church: Communion, Participation, and Mission."

The report is the synthesis of 290 documents received by the USCCB from various contributors. The report said the documents "represent over 22,000 reports from individual parishes and other groups" that emerged from more than 30,000 opportunities to join the synodal process.

The national synthesis report draws from the 14 intermediate syntheses submitted by teams from each of the geographic regions of the U.S. church. All 178 Latin dioceses and archdioceses submitted syntheses that were incorporated into the regional reports.

The 18 Eastern Catholic eparchies and archeparchies, which make up a separate region under the USCCB, submitted their reports directly to the Vatican.

For the process, the USCCB created a 16th "region" for the numerous Catholic national ministries, universities, associations and organizations working throughout the country. Those organizations submitted 112 summary reports. 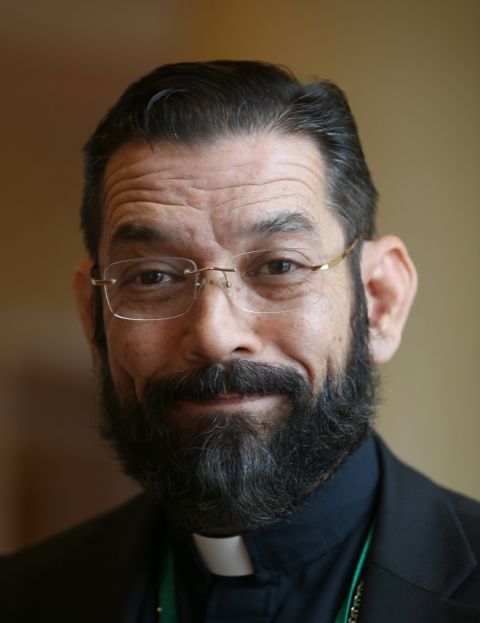 In a letter introducing the report, Flores described the document as "an attempt to synthesize and contextualize the common joys, hopes and wounds called forth with the help of the Holy Spirit in the unfolding of the synod."

"While not a complete articulation of the many topics and perspectives shared in the listening process, this synthesis is an attempt to express the broader themes that seemed most prevalent in the dioceses and regions of our country," he wrote.

The report is divided into four themes: "Enduring Wounds," "Enhancing Communion and Participation," "Ongoing Formation for Mission" and "Engaging Discernment." Each section summarizes common observations raised in the listening sessions.

The report cites several "enduring wounds" expressed during the sessions. In addition to the still unfolding effects of the sexual abuse crisis, the COVID-19 pandemic continues to exact a toll on the sense of community people felt before the virus swept around the world in 2020.

"The pandemic itself 'has led to the fraying of our communities in some ways, accelerating a trend toward disengagement and intensifying the isolation and loneliness of many, youth and elderly in particular. A large number of faithful have not yet returned to worship,'" the report said, quoting the Region 12 submission from Northwestern states.

Divisiveness and polarization in the church was a concern expressed in multiple regional reports. The Region 9 report covering four Midwestern states said division over the celebration of the Eucharist is disconcerting, particularly when it comes to the pre-Vatican II Mass.

"The limited access to the 1962 missal was lamented; many felt that the difference over how to celebrate the liturgy 'sometimes reach the level of animosity. People on each side of the issue reported feeling judged by those who differ from them,'" the national synthesis report said quoting the Region 9 submission.

Other concerns were expressed by people who feel marginalized. The report said marginalized people fall into two broad groups.

One made up of those who are vulnerable by their lack of social or economic power, including those with disabilities, the mentally ill, immigrants, ethnic minorities, people in the U.S. without documents, the unborn and their mothers, and those living in poverty, who are homeless, are incarcerated or living with an addiction.

The second group includes women, "whose voices are frequently marginalized in the decision-making processes of the church," the report said. Others in the group include those who are marginalized "because circumstances in their own lives are experienced as impediments to full participation in the life of the church" including members of the LGBTQ+ community and people who are divorced and may have remarried, and those civilly married.

"The synodal consultations around the enduring wounds caused by the clergy sexual abuse scandal, the pandemic, polarization and marginalization have exposed a deep hunger for healing and the strong desire for communion, community, and a sense of belonging and being united," the national synthesis report said.

Under the theme of "Enhancing Communion and Participation," the sacramental life of the church and the spirit of welcome within the church were addressed. The report found that the wounds expressed among participants in listening sessions could be addressed by the church being more welcoming to those not in the mainstream.

Quoting the Region 13 report from Southwestern states, the synthesis report said participants were concerned with "obstacles to community within their parishes, partly due to the divisive political climate and resulting polarization within the country."

People in the region also identified the centrality of the Eucharist as a "source of hope for greater unity." They said in addition that "receiving Eucharist does bring them more closely in solidarity with the poor," according to the synthesis report.

Concerns about racism within the church and the lack of welcome to diverse cultural and ethnic communities emerged in listening sessions. The elderly, the report said, were particularly hurt by the departure of young people from church life.

"Young people themselves voiced a feeling of exclusion and desired to participate more fully as members of the parish community," the synthesis report said.

The synthesis report also included the observation that "nearly all synodal consultations shared a deep appreciation for the powerful impact of women religious who have consistently led the way in carrying out the mission of the church."

Participants in listening sessions expressed a "desire for stronger leadership, discernment and decision-making roles for women -- both lay and religious -- in their parishes and communities." 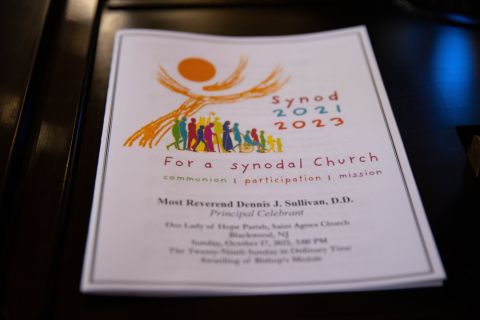 A program for a Mass opening the synod process in the Diocese of Camden, N.J., is seen at St. Agnes Church of Our Lady of Hope Parish in Blackwood, N.J., Oct. 17, 2021. (CNS photo/Dave Hernandez, Catholic Star Herald)

The synthesis report said a common hope that emerged nationwide was the "desire for lifelong spiritual, pastoral and catechetical formation as disciples." Discussions in the sessions "made clear the importance of evangelization as we continue to live out the church's mission, which requires stronger formation."

Steps would include accompaniment with families in their formation as people long for a closer encounter with Jesus.

Suggestions also emerged on the need to "journey together" in the formation of clergy. The Region 5 intermediate report from Southern states suggested such formation was needed to better understand human and pastoral needs, cultural sensitivity, stronger emphasis on social justice, how to include laypeople in decision- making and "learning to speak with empathy, creativity and compassion."

Laypeople, the synthesis report said, also expressed hope that a genuine appreciation for their gifts and talents would grow into a "relationship of collaboration" with pastors.

The final theme, "Engaging Discernment," concluded that the diocesan phase of the synodal process was the first step in a church rooted in synodality, or walking together.

The synthesis report said the process enabled thousands of people to reengage "in the simple practice of gathering, praying together and listening to one another."

Going forward, the report called for continued engagement with communities that did not participate broadly in the listening sessions particularly Indigenous people, ethnic communities and immigrants.

"Engaging and discerning with our sisters and brothers who experience the woundedness of marginalization, as well as those whose voice were underrepresented within the synodal process, will be essential for the unfolding of the synodal journey in our dioceses and in our country," the report said.

The next phase in preparation for the Synod of Bishops is being called the continental phase. It will find teams gathering by continent to synthesize the reports submitted to the Vatican thus far. Synod officials will prepare the "instrumentum laboris," or working document, to guide continental or regional ecclesial assemblies that will take place by March.

The North American report will be submitted by the U.S. and Canada. Flores said some preliminary outreach has already occurred among the teams from the two nations. Other continental reports will involve significantly larger gatherings of teams from individual ecclesial assemblies.

Those assemblies will produce another set of documents that will help in the drafting of a second working document for the Synod of Bishops in October 2023.

The synod is expected to produce a final document on how synodality can be practiced throughout the church.

Losing my religion: Clergy who no longer believe gather online