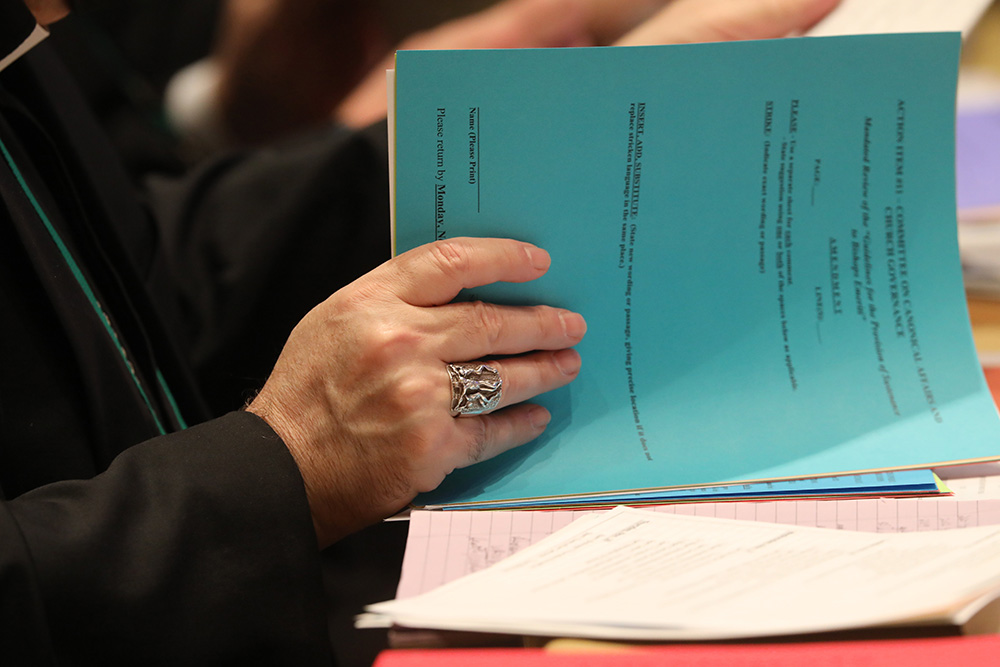 A bishop looks over paperwork during a Nov. 17 session of the fall general assembly of the U.S. Conference of Catholic Bishops in Baltimore. (CNS/Bob Roller)

After more than a year of intense debate on a controversial document originally intended to target pro-choice Catholic politicians like President Joe Biden, the U.S. bishops on Nov. 17 instead approved a milquetoast text summarizing Catholic teaching on Communion.

The 30-page document was passed by the bishops at their Nov. 15-18 assembly here only a day after the Vatican's ambassador to the U.S. addressed the prelates and told them to tamp down divisions among themselves. The document makes only one oblique reference to laypeople who "exercise some form of public authority."

Such persons, the text says, "have a special responsibility to form their consciences in accord with the Church's faith and the moral law, and to serve the human family by upholding human life and dignity."

The bishops approved the text in a vote of 222-8, with three abstentions, after a fairly tepid debate on the floor of their assembly, being held at the Marriott Waterfront hotel. Although several prelates asked for small amendments to the final proposed text, they mostly focused on grammatical or linguistic issues, including the meaning of the phrase "et cetera."

The document — immediately criticized online by conservative Catholics hoping the bishops would address politicians like Biden and House Speaker Nancy Pelosi — appears to represent something of a whimper ending to an initiative first begun by Los Angeles Archbishop José Gomez, the president of the U.S. Conference of Catholic Bishops, after Biden's November 2020 election win.

Just two weeks after Biden's election, Gomez issued a warning that Biden's position on abortion created a "difficult and complex situation" for the country's bishops. He also announced the prelates would form a working group to address the issue. That group would eventually recommend that the conference's Committee on Doctrine draft a document on the importance of "eucharistic coherence."

Speaking at a press conference on Nov. 16, Gomez seemed to misstate the origins of the eventual Communion text. The archbishop told journalists the intention was never to address Biden specifically, but rather to help Catholics understand the importance of the Eucharist in their faith lives. Gomez called the text "absolutely necessary."

Massimo Faggioli, a theology professor and church historian at Villanova University, told NCR that the events of the past year risked turning the Catholic Church in the United States into a partisan and sectarian institution.

"Especially when the president of the USCCB shows a partisan understanding of movement for social and racial justice in the U.S.," said Faggioli, referencing a controversial Nov. 4 speech in which Gomez denigrated modern social justice movements, such as antiracism groups like Black Lives Matter, as Marxist-inspired, anti-Christian "pseudo-religions."

It was not immediately clear whether the U.S. bishops would be seeking Vatican approval, known as a recognitio, of their new Communion document. During votes on several other items on Nov. 17, conference officials noted the need for those items to receive a recognitio, but did not make such a declaration about the Communion text.

One canon lawyer consulted by NCR suggested that without the request for a recognitio, the text could not be considered a "doctrinal declaration," under the norms laid out for bishops' conferences in Pope John Paul II's apostolic letter Apostolos Suos.

At a press briefing later on Nov. 17, the chair of the bishops' doctrine committee, Bishop Kevin Rhoades of Fort Wayne-South Bend, Indiana, confirmed that the prelates would not be seeking the Vatican's approval of their text. Rhoades also framed the document as necessary in order to address declining numbers of Mass attendance among Catholics.

Crookston, Minnesota Bishop-designate Andrew Cozzens also acknowledged than an oft-cited study on Catholics' beliefs about the Eucharist by the Pew Research Center might be misleading, and said Georgetown University's Center for Applied Research in the Apostolate was considering a "redo" of that study.

Unlike during the bishops' last meeting in June, which was held virtually, the debate in Baltimore over the Communion text was minimal. Only four bishops offered comments during an initial presentation of the document on Nov. 16, and three interjected in an open discussion during the final debate on Nov. 17.

The bishops also were known to discuss the text in executive sessions, which are held behind closed doors. One of those sessions took place on Nov. 15, another in the morning of Nov. 16, and a third in the afternoon of Nov. 16.

At the Nov. 16 briefing, bishops framed the closed-door sessions as a normal part of their process, although assemblies in recent years have usually included only one executive session.

"That's part of what we do," said Bishop Michael Burbidge of Arlington, Virginia, chair of the bishops' Committee on Communications. "We do have that time allotted to be able to talk to one another, as brother bishops." 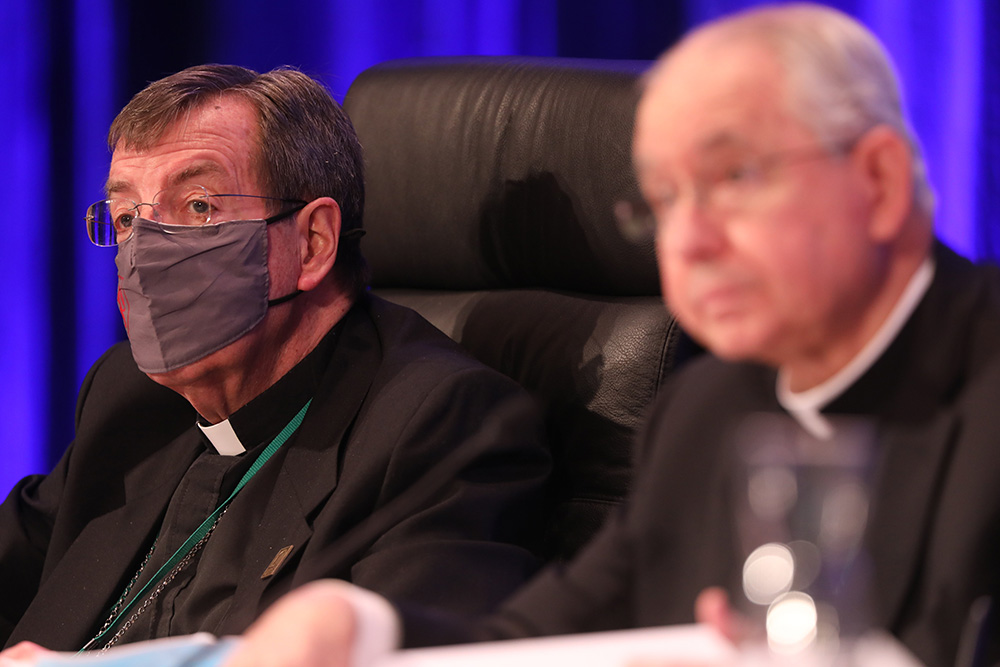 The final Communion text carries the title "The Mystery of the Eucharist in the Life of the Church."

Before the final debate on the text on Nov. 17, the doctrine committee recommended to the bishops that they accept nine slight amendments to the document proposed by individual bishops. They also recommended the prelates decline to adopt 19 other proposed changes.

One accepted amendment was a request from Detroit Archbishop Allen Vigneron that a line be added to emphasize that scandal, caused by those who receive Communion in a state of mortal sin, weakens "the resolve of other Catholics to be faithful to the demands of the Gospel."

In accepting Vigneron's amendment, the committee added a footnote from the Catechism of the Catholic Church, No. 2284, which expounds on scandal as "a grave offense" that damages other people and deliberately leads them into sin.

Another accepted amendment was proposed by San Francisco Archbishop Salvatore Cordileone, a conservative prelate who has openly clashed with Pelosi and had been pushing for the document to address Catholics in public life who support legalized abortion.

Cordileone sought to include the unborn in a section of the document that addresses categories of vulnerable people, such as the poor and victims of racial injustice. The bishops voted to accept that amendment, as well as another from Phoenix Auxiliary Bishop Eduardo Nevares to name migrants and refugees.

Among other items on Nov. 17, the bishops also voted to review the Charter for the Protection of Children and Young People, the set of procedures originally adopted in 2002 to protect children from clergy sexual abuse.

The proposal passed after several interjections, including one from retired Bishop Nicholas DiMarzio of Brooklyn, New York, that appeared to ask that the charter's procedures for taking accused priests out of ministry be modified.

DiMarzio, whom the Vatican recently exonerated of allegations of sexual abuse dating back from half a century ago, asked the committee to address "the issue of priests being taken out of ministry because they are actually taken as guilty until proven innocent."

This story was updated at 6:30 p.m. CST to include information from the press briefing that took place in the early evening Nov. 17.

This story appears in the USCCB Fall Assembly 2021 and Bishops, Biden and Communion feature series.
A version of this story appeared in the Nov 26-Dec 9, 2021 print issue under the headline: After year of divisive debate, bishops approve Communion document.