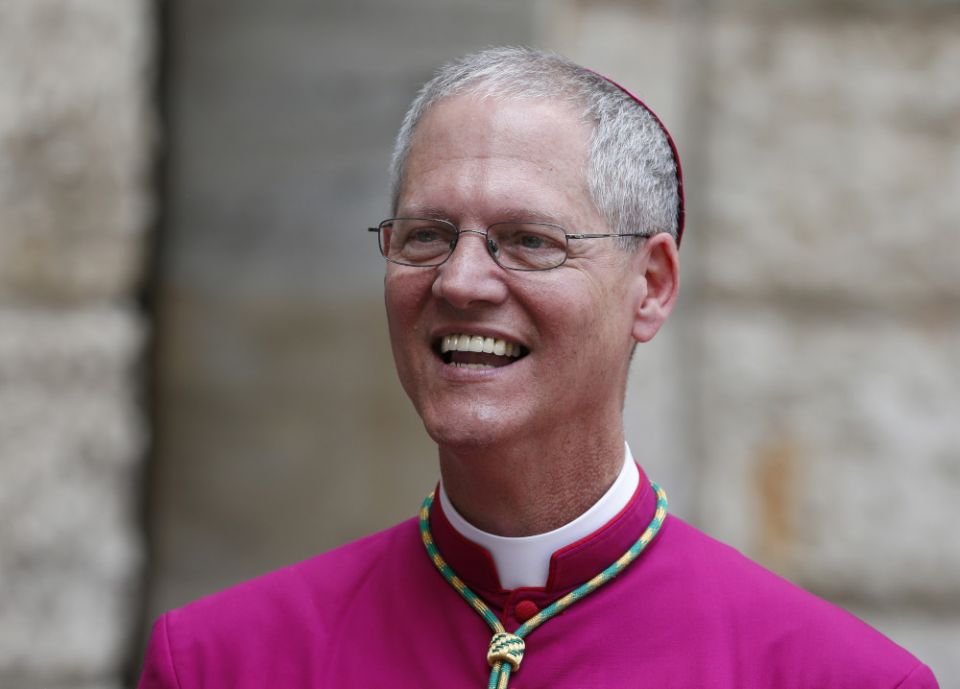 Archbishop Paul D. Etienne, who was appointed by Pope Francis as the new archbishop of Seattle Sept.3, 2019, has said he will not live in Connolly House, a 9,000-square-foot mansion, saying: "I am a pastor, not a prince." (CNS/Paul Haring)

The appointment and resignation were announced Sept. 3 in Washington by Archbishop Christophe Pierre, apostolic nuncio to the United States.

In April, Francis named Etienne, former archbishop of Anchorage, Alaska, to the role of coadjutor archbishop of the Archdiocese of Seattle. He was officially welcomed by the archdiocese during a Mass of reception June 7 at St. James Cathedral in Seattle.

That liturgy began with Pierre welcoming the new coadjutor and praising Sartain for asking for help, saying that takes "a lot of courage."

Sartain had asked Francis to appoint a coadjutor because of spinal problems he suffered that required several surgeries.

Etienne, who turned 60 in June, had been in Anchorage since October 2016. Sartain, 67, has led the Seattle Archdiocese since 2010.

In an April 29 letter to archdiocesan Catholics, Sartain said: "To say that I am delighted by the Holy Father's choice would be an understatement. Etienne is a wonderful shepherd whose love for the Lord is expressed through a deep life of prayer and devotion to the sacraments, as well as contagious enthusiasm for the proclamation of the Gospel and service to those in need in the name of Jesus."

When the appointment was first announced, Etienne also had words of praise for Sartain, saying: "We've known each other since we were priests, before either one of us were ever named bishops, and he's just a great, great man. And I have no doubt that I'm inheriting a church that's in fine shape, having been under his guidance."

Etienne was born June 15, 1959, in Tell City, Indiana. He attended Bellarmine College in Louisville, Kentucky, then the University of St. Thomas/St. John Vianney College Seminary in St. Paul, Minnesota, graduating with a degree in business administration.

From 1988 to 1992, he was a seminarian at the Pontifical North American College, where he earned a degree in sacred theology.

He was ordained a priest for the Archdiocese of Indianapolis in 1992 and returned to Rome a few years later where he received an advanced degree in spiritual theology from the Pontifical Gregorian University.

In the Archdiocese of Indianapolis, Etienne served as pastor of several parishes, vocation director, vice rector of Bishop Simon Brute College Seminary and spiritual director of St. Meinrad School of Theology. He was appointed bishop of the Diocese of Cheyenne, Wyoming, by Pope Benedict XVI in 2009. Francis appointed him archbishop of Anchorage in 2016.

He serves on a number of Catholic boards and has served as secretary of the U.S. Conference of Catholic Bishops. He has also written several books on spirituality.