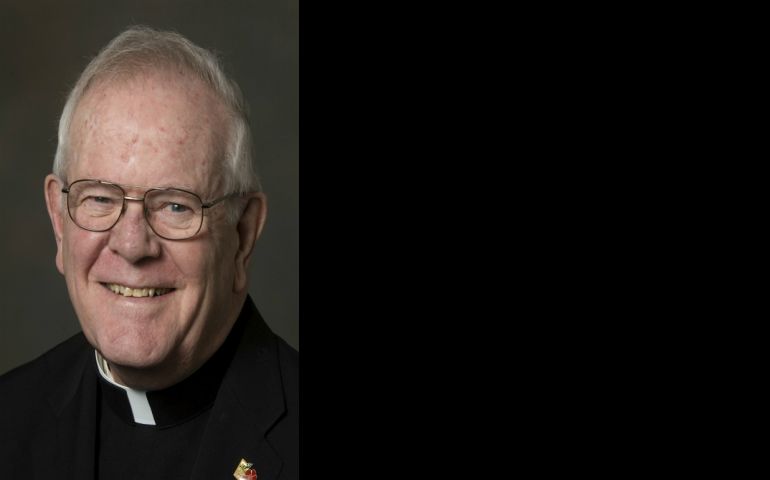 Bishop James M. Moynihan, retired ninth bishop of the Diocese of Syracuse, N.Y., died March 6 at age 84. He is pictured in a 2006 photo. (CNS photo/Paul Finch)

The bishop's body was to be received at the Cathedral of the Immaculate Conception in Syracuse the afternoon of March 9 for a viewing, followed by an evening vigil. His funeral Mass was to be celebrated March 10 by New York Cardinal Timothy Dolan, followed by burial in the cathedral crypt.

"We thank him for a lifetime of service to the church and in a very special way for his service to the Diocese of Syracuse," said Syracuse Bishop Robert Cunningham in announcing the death of Moynihan. "We pray now that the evening has come, the fever of his life is over, his work is done and that God will give him a safe lodging, holy rest and peace forever."

A statement from the Diocese of Rochester called Moynihan "a true shepherd and an example of Christian discipleship for us all."

"He faithfully served the people of God as a priest, pastor and in many leadership roles. We thank God for his service to the church," it said.

Moynihan's 14 years as Syracuse's bishop included shining moments and dark days, from spearheading some of the most successful fundraising campaigns in the diocese's history and supporting the sainthood cause of a local Franciscan sister to implementing parish reconfigurations and addressing the clergy sexual abuse crisis.

A staunch supporter of life at every stage, Moynihan spoke out often against abortion. Nearly seven months after his installation, he led a prayerful procession of more than 300 people to Planned Parenthood in Syracuse; he was the first Syracuse bishop to lead such a procession, according to a diocesan release.

In 1999, he participated with nearly 30 others in a silent vigil on the steps of the Onondaga County Courthouse to protest the possible use of the death penalty in the sentencing of James "Jeff" Cahill.

Moynihan oversaw the most successful fundraising campaign in the diocese's history, raising more than $42 million through the Heritage Campaign. More than $52 million was generated over the 14 annual HOPE Appeals during his tenure. The Bishop's Education Fund accrued $1.2 million by his retirement. Moynihan also helped to steward a bequest of more than $30 million from a Binghamton couple, Robert and Catherine McDevitt.

His 2001 pastoral letter, "Equipping the Saints for the Work of Ministry," outlined the "institutional and structural challenges" facing the diocese, including the shrinking number of priests and religious and the aging and declining local population, as well as responses to those challenges, including creation of pastoral care areas, parish mergers and closures, and increased lay responsibility.

In 2007, Moynihan announced parish reconfiguration plans for the diocese that will ultimately lead to the closure of some 40 churches and the merging of others in the years to follow. This pastoral planning continues in the diocese today.

Moynihan led the local church as the national clergy sexual abuse crisis shook the faithful and hit home. The diocese implemented the standards of the U.S. bishops' "Charter for the Protection of Children and Young People" and put in place a child and youth protection policy; mandatory abuse prevention training and background checks for all clergy, religious, employees, and volunteers who work directly with children; a victim assistance coordinator; a safe environment officer and committee; and a diocesan review board tasked with determining the credibility of allegations of abuse.

In 2003, Moynihan held a healing service at St. Mary of the Assumption Church in Oswego, the first of several such services.

"I am very conscious of the fact that the good people of this northern region of the diocese have been hurt and their faith sorely tested by sins of priests and bishops," he said. "In the names of those who have sinned, and to those who have been sinned against, I am here this evening to say that I repent in the name of the former for the sins that have been committed against God and against you."

In 2004, he issued a report on abuse by clergy in the diocese stating, among other statistics, that 16 diocesan priests had been permanently removed from ministry.

Moynihan was a champion for St. Marianne Cope's cause for sainthood. The Franciscan nun lived in and ministered throughout central New York before moving to Hawaii in 1883 to care for patients with Hansen's disease, also known as leprosy. She died in 1918. Her remains were moved to Syracuse in 2005 as her cause for canonization unfolded. She was canonized in 2012.

"Bishop Moynihan's support to Mother Marianne's cause is integral to her being [elevated] to the status of Blessed Marianne today," the late Franciscan Sister Mary Laurence Hanley, advocate for the cause, told The Catholic Sun, Syracuse diocesan newspaper, in 2009.

"He took the cause to head and heart from the beginning, advocated it personally both to Pope John Paul II and to our current Holy Father Pope Benedict XVI," she said. "We are indebted to him for recognizing Mother's heroic virtue and placing thought into action. His enthusiasm, drive and personal devotion have helped make work involved not only easier but a joyful experience."

Former nuncio to U.S. heard rumors of McCarrick misconduct in 1994