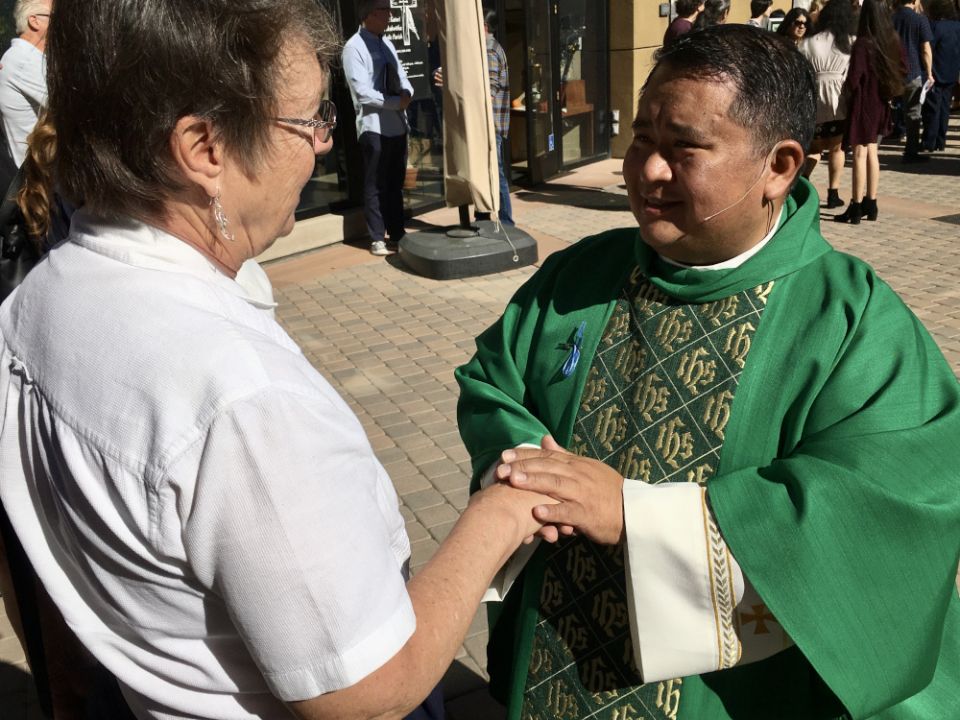 SANTA CLARITA, Calif. —  It was the 33rd Sunday in Ordinary Time at St. Kateri Tekakwitha Church in Santa Clarita.

"But this is not very ordinary for us here," said Fr. Albert Avenido, the pastor, at the start of the 10:30 a.m. Sunday Mass Nov. 17. "We are dealing with a very difficult time. I thank each one of you for helping each other. You are part of God's spirit."

Three days had passed since Nathaniel Berhow, on his 16th birthday, went to Saugus High School, pulled a .45-caliber semiautomatic handgun from his backpack and started firing. Five students were hit before he turned the gun on himself and was taken to the hospital in critical condition.

Classmate Dominic Blackwell, 14, died that day. Another student, Gracie Anne Muehlberger, 15, died the next morning. Later in the afternoon of Nov. 15, Berhow died, with his mother, Mami Matsuura, next to him. Three other students have been treated for injuries.

Authorities are still searching for a motive. And for those who have come to St. Kateri, just two miles north of the Saugus High campus, for either a Nov. 14 vigil Mass or the regularly scheduled Masses on the weekend of Nov. 16 and 17, a search for answers continued.

Mark Berhow, Nathaniel's father, died of a heart attack just before Christmas 2017, and his funeral Mass was celebrated at St. Kateri.

The priest said he recently spoke to Nathaniel Berhow's Boy Scout master, who was trying to retrace his last few months and wondered how he and Berhow had recently disconnected. Classmates have spoken about the teen's respectful nature and success in classes.

With funeral arrangements pending, Avenido said he has already been asked: If the service for Berhow is here, would he accept it?

"I have said, 'Of course,'" the pastor told Angelus News, the online media outlet of the Los Angeles Archdiocese. "Many have thanked me for saying that. Many here want to reach out to their family and console his mother. She is suffering severely.

"On the other side of the coin, some have also asked: Why would our church celebrate a Mass for the shooter? What is the church's teaching about this?"

Avenido added, "I understand where everyone is coming from. We have a lot of kids who are close to these families. These are challenging times."

About 1,000 people from the parish of about 4,600 registered parishioners attended a Nov. 14 healing Mass the night of the shootings. On Nov. 16, Avenido gathered for dinner with a group of high school students in the church hall, listening to them talk about how they were dealing with things. One girl said she was within two feet of the gunshots, but turned away and somehow was spared.

"The more I am here, the more I realize this parish acts like a tightly knit family," said Avenido, who arrived at the parish last summer. "This is a test of all our faith, and our support of each other."

On Nov. 17, the Gospel reading spoke about identifying signs of the end times. Avenido recalled how in the past five months, this Santa Clarita community has been jolted by earthquakes and faced evacuations because of wildfires.

This tragedy is testing the shaken parishioners again.

"Thinking of end times isn't on our list of topics we like to think about," the priest said during his homily. "Moments like this, we realize that things can happen any time when we don't expect it, and it happens so fast. Jesus is not trying to scare us. He is trying to prepare us and focus on our relationship with God.

"In these challenging times in our lives at St. Kateri, I am grateful for the gift of faith," he continued. "We are ministering to our loved ones and members of our family in the light of our faith. As you see pictures lately of people hugging each other, no one is blaming anyone. You hear people saying, 'Pray for ...' We pray for each other."

Five miles south of the Saugus High campus, St. Clare of Assisi Church in Canyon Country has tried to bring comfort to its parishioners who have family and friends in the neighboring Santa Clarita.

On Nov. 15, a student-led solidarity prayer service drew about 100 people to the church. A table in front had a black cloth and six burning candles to represent the students affected.

After that prayer service, Fr. Olin Mayfield, pastor of St. Clare, celebrated Mass. He cited the passage from the Gospel of John that described how "the doors of the house where the disciples had met were locked for fear."

"These are words we hear differently on a night like this," the priest said.

"That is a sentence; the doors were locked out of fear, as something as tragic and horrible and contrary to the book of God has happened, we can very much turn into a people of fear," he explained. "Even in the midst of fear and experience these things we know we're not supposed to experience, we still have to be a people to seek to bring the peace of God into the world.

"We are called to go out and bring peace in every way, in every shape, in every form," he continued. "That can be a scary thing. It's something we do in the midst of fear. Yet we must do it because that's who we are."

Amid today's climate of violence, Jesus calls us to listen and follow him