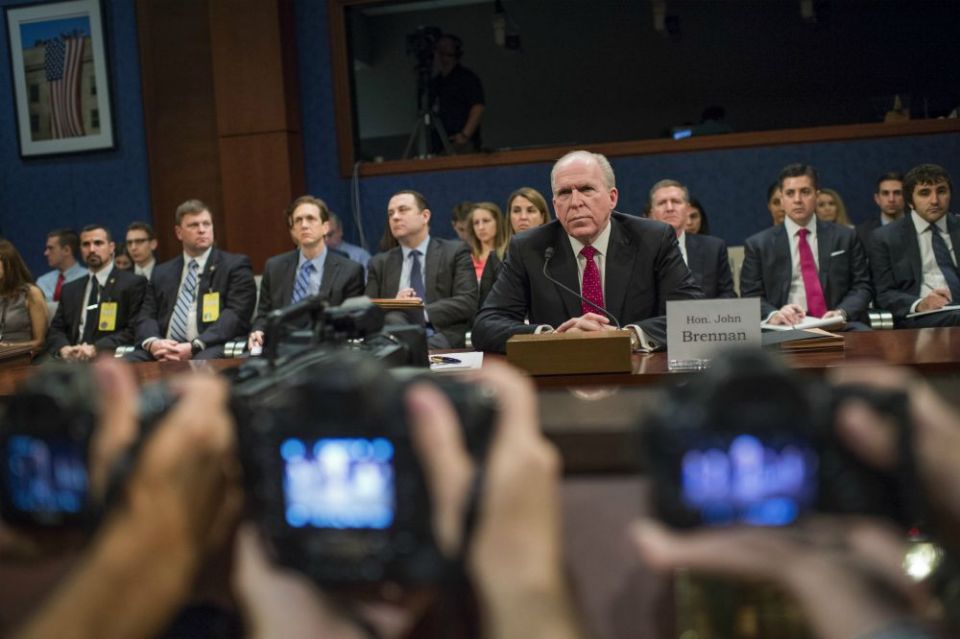 Photographers take pictures of former CIA director John Brennan testifying before the House Permanent Select Committee on Intelligence in the Capitol Visitor Center on Russian ties to the 2016 election on May 23. (Newscom/CQ Roll Call, Tom Williams)

Brennan's 33 years of government service have also included stints as deputy national security advisor, assistant to the president for homeland security and counterterrorism and founding director of the National Counterterrorism Center. He is a 1977 graduate of Fordham, received an honorary degree from the university in 2012 and received the Brien McMahon Award for Distinguished Public Service from Fordham President Jesuit Fr. Joseph McShane in 2014.

However, Brennan is a controversial figure at Fordham. As NCR reported in 2015, the decision to award him an honorary degree was met by protests from some Fordham faculty and students who considered it an endorsement of the "war on terror" and the CIA's drone campaign; protests intensified in late 2014 after the Senate Intelligence Committee released a report detailing the CIA's program of detaining and torturing terrorism suspects.

Eight faculty members founded a group called Fordham Against Torture (FAT) which sponsored a petition to revoke Brennan's honorary degree in 2015. Over 725 faculty members, students and alumni signed the petition, which was considered by Fordham's board of trustees. The board unanimously voted not to revoke the degree.

In a letter explaining the decision, McShane condemned torture but said Brennan could not be held responsible for policies set by the president and other elected officials.

As Distinguished Fellow at Fordham, Brennan will use his expertise to help the center bring public attention to issues such as national security and foreign policy. He will also participate in conferences and workshops hosted by the center and serve as a mentor to students.

MISSOURI — Two small Catholic universities in Missouri, both founded by the Sisters of St. Joseph of Carondelet, announced initiatives to increase affordability on Sept. 5th.

Effective Fall 2018, Avila University in Kansas City will offer a 33 percent tuition reduction to all full-time undergraduates. Tuition will be $19,900, including books and campus fees.

University President Ron Slepitza also announced the "Avila Promise," a set of initiatives meant to address students' educational concerns. The four "cornerstones" of the promise are:

According to the "Avila Promise" information page, the tuition reduction aims to reduce confusion and help students plan for the future by shifting from the typical "high price/high discount" model where students are presented with an "artificial" sticker price but receive "inflated" scholarships to offset it.

Meanwhile, Fontbonne University, located in Clayton, Missouri, a suburb of St. Louis, announced the "Fontbonne Promise." Starting in 2018 the program will allow qualified Missouri residents with a FAFSA Expected Family Contribution of $0 to attend Fontbonne tuition-free for up to five years.

"The neediest students who demonstrate academic ability deserve an opportunity to earn a college degree," said Fontbonne President J. Michael Pressimone. "This is about providing access to education."

The program is funded in part by federal and state aid and in part by Fontbonne College Partners who pledge to sponsor a student with a donation of $8,500 every year for up to five years. Any tuition not covered by those two sources will be waived by the university.

Tuition at Fontbonne is currently $25,460, while on-campus room and board, which is not covered by the program, costs an average of $9,590. Students are not required to live on campus. 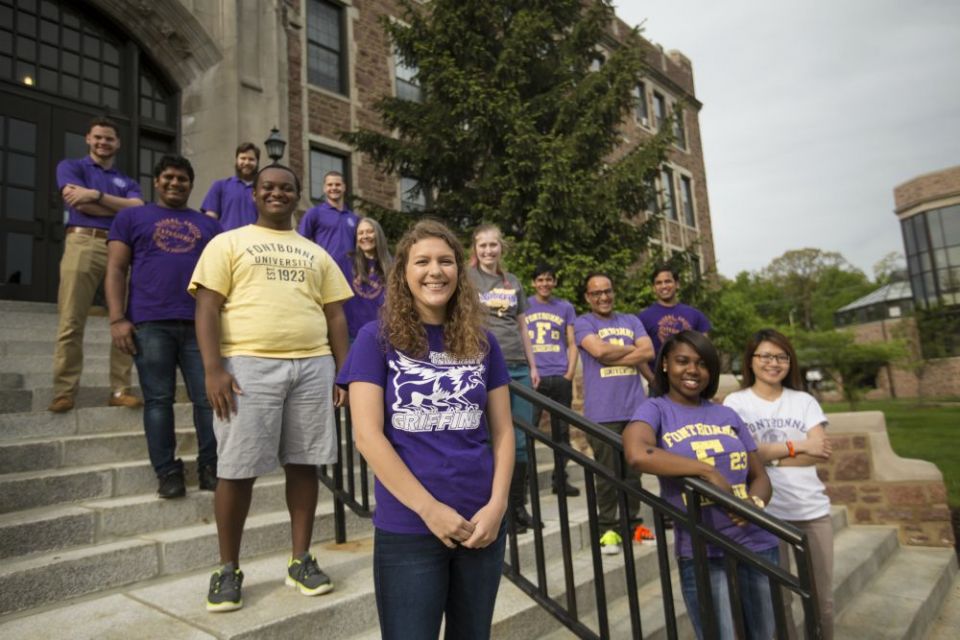 HOLLAND, MICH. — Hope College, a Protestant college with roots in the Reformed Church in America, announced in an Aug. 31 press release that outreach to Catholic students recently improved when the college's Saint Benedict Institute hired a priest.

The Saint Benedict Institute was founded four years ago by Catholic scholars at Hope who wanted Catholic students, who make up 20 percent of the student body, to have a place on campus to practice their faith.

Jared Ortiz, the executive director of the institute and assistant professor of religion at Hope, said the Saint Benedict institute aims to address "the formation of the whole person, body and soul, mind and heart" by bringing together a campus ministry and a center for Catholic thought.

The institute offers programs and activities such as Catholic-reformed dialogue, a Catholic speaker series, and immersion trips. Dominican Fr. Nicolas Monco, who was hired this summer, will offer daily Mass and confession and weekly Eucharistic adoration.

SOUTH BEND, IND. — The South Bend Tribune reported Sept. 4 that Holy Cross College has stabilized its finances over the summer with a new financial plan and administrative team.

News broke in May that an accrediting agency had ordered Holy Cross to make a four-year plan to improve its finances, characterized by increasing debt and the need to eliminate positions over the summer to balance its budget.

The university has streamlined its administration, suspended three academic programs and introduced a program to allow students to complete a bachelor's degree in three years starting in 2018.

The University of Notre Dame's campus dining operation will start managing food service at Holy Cross, and Notre Dame purchased 75 acres from Holy Cross, which Holy Cross will lease for $1 a year for at least the next 75 years.

BISMARCK, ND — The University of Mary in Bismarck, North Dakota's only private Catholic university, announced Sept. 6 that it welcomed its largest incoming class ever this fall. The 600-plus freshman come from 36 states, two Canadian provinces, and seven countries.

Vice President for Enrollment Management Michael McMahon attributes the growth to St. Mary's affordability, its "education for the whole of life," and its innovative degree path, "year-round campus."

Year-round campus allows students to obtain a bachelor's degree in 2.6 years by taking full course loads for eight consecutive semesters, including in the summer. Students can also complete both their bachelor's and master's degree in just four years through the same program.

Overall enrollment at Mary is more than 3,200, a 5 percent increase from last year.

A week of trials for anti-drone activists