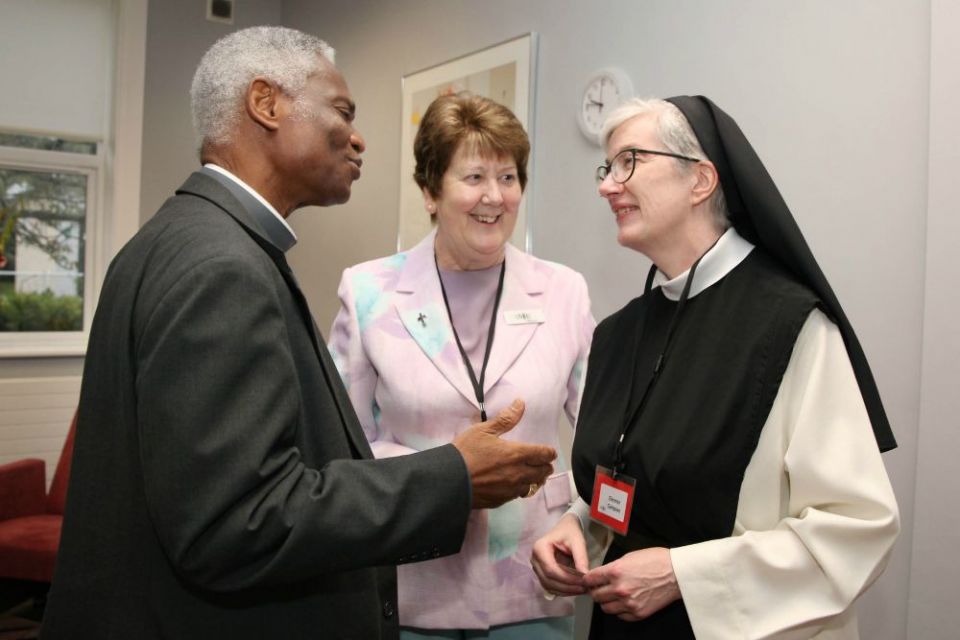 The Prefect of the Dicastery for Promoting Integral Human Development, Cardinal Peter Turkson, speaks with Mercy Sr. Liz Murphy, who is secretary general of Association of Leaders of Missionaries and Religious of Ireland, and Cistercian Sr. Eleanor Campion at the association's meeting Oct. 3 in Dublin. (John McElroy)

Dublin — Cardinal Peter Turkson has defended Pope Francis' outreach to the poor and on the environment from conservative critics who want the pope to devote less time to social issues and more time to speaking about prayer.

Speaking to NCR following his keynote address to the fall conference of the Association of Leaders of Missionaries and Religious of Ireland (AMRI) in Dublin titled "Mission Today in 'Our Common Home,' " Turkson acknowledged, "people are beginning to criticize him and ask why doesn't he limit himself just to prayer and preaching the Gospel instead of getting involved in all these social issues about the Amazon and economics."

Francis himself recently referred to such criticisms on his return flight to Rome after his visit to Mozambique, Madagascar and Mauritius in September.

Asked by reporters about conservative media and prelates' reproofs, Francis praised "constructive criticism" but also highlighted, "The things I say about social issues are the same things [Pope] John Paul said. I copy him [and they say] 'the pope is too communist.' " He hit out at "those who smile while stabbing you in the back."

On Oct. 3 in Dublin, Turkson, the prefect of the Dicastery for Promoting Integral Human Development, said there have always been those in the church who try to "separate the spiritual from the social" and even put them in opposition to each other.

"There is no way you can love anybody without showing concern for their concrete situation, for how they live." He said it was "so artificial to profess love without concern for the reality of the situation that a person finds himself in," and he quoted from St. James, who said, "Faith without works is dead."

Turkson said the pope's critics were asking him to limit himself to just spirituality partly because of a March 2020 three-day event in Assisi, Italy, on "a new form of economics."

"The Economy of Francesco" will bring together young economists, entrepreneurs and change-makers from all over the world, invited directly by Francis, to develop an economy that is fairer, inclusive and sustainable.

"The church's social teaching at a certain point is a dialogue between faith and reason and a dialogue with some of the social principles of economics. That kind of dialogue helps the church to get its foot in the doorway and other groups listen to what the church has to say," Turkson explained.

Turkson said it was "unfortunate" that there are divisions over the synod for the Amazon. He also appeared to push back against those who hope to see the issue of celibacy debated and to promote the ordination of married men.

"There is a challenge in relation to the lack of a permanent pastoral presence in the area. We have had that also in Ghana, and we deal with it by creating catechists," he said. "The next step we were thinking about was making eucharistic ministers. The solution doesn't always have to go into viri probati [married men of proven faith]. It is being drummed up."

He said that it was "unfortunate" that some when faced with a pastoral challenge "formulate only one solution and think that is the only thing that should be done to solve every problem and that everybody must do it — I just don't go for that."

Turkson said he was not surprised or worried, as there had also been similar pressure at the 2009 African synod to address celibacy, but that "precisely because of that [pressure] the issue had not been talked about."

Addressing the AMRI conference on October's Extraordinary Mission Month, the cardinal stressed, "Anybody who has a mission, first must have a vision. If there is no vision, there can be no proper mission." For missionaries, he said, "our encounter with Jesus inspires and enlivens everything that we do." 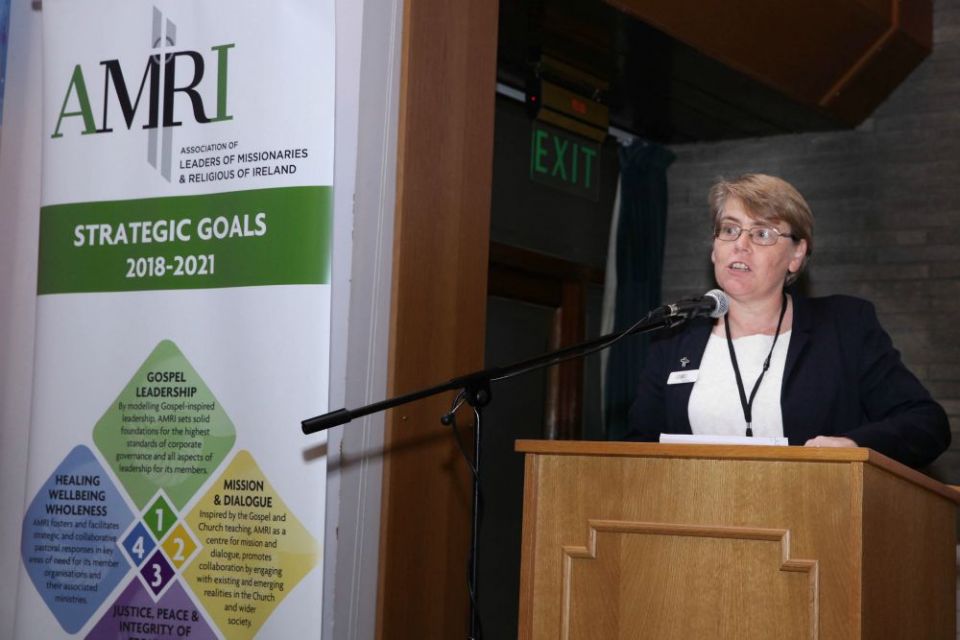 Sr. Kathleen McGarvey, Missionary Sister of Our Lady of Apostles and president of the Association of Leaders of Missionaries and Religious of Ireland addresses the autumn cnonference "Mission Today in Our Common Home." (John McElroy)

Referring to Francis' message for the opening of the Extraordinary Mission Month and the Gospel of the talents (Matthew 25:14-30), Turkson said all the baptized must use their talents in support mission. Fear of a lack of resources to go on mission was a "sin against mission" as it allowed people to "become slaves to the fears that immobilize us."

Elsewhere in his address, Turkson identified four "signs of the times," the first of which is the ecological crisis, climate change and global warming. "This is a sign of the times that invites us to a particular form of mission that we can carry out by hearing the cry of the Earth and the cry of the poor." He lamented climate sceptics such as those who accused Francis of "turning a lie into a doctrine" with his publication of "Laudato Si', On Care for Our Common Home," and who ignored the warnings from the scientific community that we are "almost on the precipice."

Other signs of the times include the growing inequality in communities between the rich and the poor and a throwaway culture that sees so many abandoned and discarded. A third sign is the threat of war to global security. Turkson expressed concern over the U.S. decision to suspend its involvement in the nuclear arms control treaty with Russia. The fourth sign he identified was the impact of the church abuse scandals, which he said tended "to suffocate everything" that the church was doing.

Responding to Turkson's address, Sr. Kathleen McGarvey, the president of AMRI, which represents and promotes collaboration between religious institutes, societies of apostolic life and lay missionary organizations in Ireland, acknowledged that Ireland has traditionally been a missionary church in a one-directional sense — that of sending missionaries.

"We in Ireland have not been used to receiving," McGarvey, a Missionary Sister of Our Lady of Apostles, acknowledged. "We can claim to have been pioneers of the church in places such as Ghana. But today the church in Ghana, like in so many African and Asian countries, is dynamic."

Despite the many challenges to the church and faith in Ireland and despite the questions posed by many about the role of faith in development, she noted that "many Irish people still believe in the value of missionary work and they trust that missionaries will use their generosity well."

She stressed that missionaries in Africa and Asia are "very much aware of their missionary call and aware that they too are baptized and sent to be missionaries to the ends of the Earth." It was time for the Irish church to "open our doors to receiving more missionaries from aboard," she said.

McGarvey also highlighted two issues which she believes undermine the church's ability to be seen as prophetic. They are the need for greater collaboration with the laity, which she said was particularly important in the context of a highly clericalized Irish church.

The other issue was women, who had merited just one short paragraph in Pope Benedict XV's document Maximum Illud, which was published 100 years ago.

To have a credible voice that people listen to, the church must give more consideration to the full inclusion of women — religious and lay — through their works but also their voice, leadership and decision-making, she said.

"It can no longer be one short paragraph of recognition and praise," she challenged.

*An earlier version of this story misidentified Fr. Tom O'Connor in a photograph caption.