Catholic jobs lost over LGBT issues on the rise 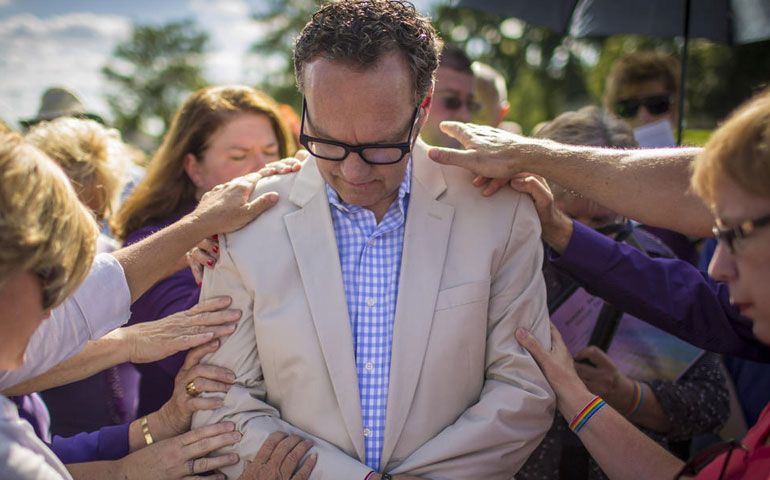 Parishioners place their hands on Colin Collette to pray Sept. 7 during a vigil to support him outside Holy Family Parish in Inverness, Ill. Collette, a music minister, was fired from Holy Family after his engagement to a man became known. (Chicago Tribune/Brian Cassella)

At least 17 U.S. church employees have been fired, resigned, refused to renew restrictive contracts, or had job offers rescinded over LGBT-related employment disputes this year.

This means that of the 40-some employees who have lost jobs at Catholic institutions since 2008 because of their sexual orientation, marital status, pregnancies or personal views on homosexuality, nearly half have lost their jobs this year.

Three developments are exacerbating problems for lesbian, gay, bisexual and transgender church workers and their co-workers in 2014, but there are signs of hope as well.

Though the causes are varied, most disputes are related to same-sex marriage and its rapid development in the United States. Nineteen states and the District of Columbia now allow same-sex couples to marry. Church employees are attaining civil marriages, often to recognize legally existing long-term partnerships already known to their employer.

At other times, an employee's marital status is inadvertently revealed to the church institution through avenues as mundane as a mother's obituary or mortgage application.

Simply supporting marriage equality has been grounds for firing, too.

As equal marriage rights continue to expand, more Catholic institutions will confront the issue of employees in civil same-sex marriages and this will likely result in more firings, unless some accommodation is reached.

Five dioceses have revised teacher contracts explicitly banning employees from supporting same-sex relationships in both their professional and their personal lives. Officials in Cincinnati; Cleveland; Columbus, Ohio; Honolulu; and Oakland, Calif., have added these "morality clauses," causing many educators to either resign in protest or refuse to renew their contracts for the coming school year. It is often heterosexual employees unwilling to end their open support for LGBT family and friends who are most affected by these contracts.

Furthermore, the question of pregnancy is cropping up. At least two lesbian women were fired this year for becoming pregnant outside of marriage and for their use of assistive reproductive technologies in doing so. The failure of some states and the church to recognize the employees' committed relationships as marriages means these types of disputes will particularly affect lesbian church workers.

In most cases, Catholic employers are considered legally justified in their actions because of religious exemptions and the patchwork nature of LGBT-inclusive nondiscrimination laws.

That said, Catholic laypeople are finding the actions of church leaders to be morally unjustified and are increasingly standing beside fired church workers. Sustained protest efforts by parish and school communities experiencing employment disputes have occurred in the states of Washington, Michigan, Georgia, Missouri and Ohio.

It is important to remember these reported incidents are only those made public. If the present pattern of firing persists, the number of LGBT-related firings of and resignations by church workers will almost certainly increase by year's end.

The following is a list of persons whose LGBT-related employment incidents have been made public so far in 2014.

Shaela Evenson, a middle school teacher in Montana, was fired in January for becoming pregnant outside marriage, which is a violation of her contract, according to the Helena diocese. Evenson, a partnered lesbian woman, has since given birth to her son. She has also filed a lawsuit against the school and a case with the Equal Employment Opportunity Commission, claiming discrimination.

Brian Panetta, who taught music at an Ohio high school, resigned following his engagement to a male partner. Panetta, who is Catholic and had greatly expanded the music program, had offered to resign at the school year's end, but the school made him leave immediately.

Orlando Jimenez resigned from his position as a New Mexico parish's music minister following his same-sex marriage. Additionally, the pastor banned Jimenez from freelancing weddings and funerals at the church, which had been his primary income.

Matthew Barrett's job offer at a Massachusetts high school was rescinded after Barrett's husband was listed as an emergency contact. He has filed a complaint with the Massachusetts Commission Against Discrimination, given that sexual orientation is a protected class under the law in that state, and, he says, the position of food services director is not included under the ministerial exemption.

Molly Shumate, a first-grade teacher in Cincinnati, resigned after the diocese added an enhanced "morality clause" to teacher contracts banning any public support of LGBT rights. Shumate, who is Catholic, refused to sign the new contract because, she says, it would mean telling her gay son that she no longer supports him.

Colleen Simon, once the social ministries coordinator at a Jesuit parish in Missouri, was fired after her marriage to another woman became public in a newspaper article highlighting the good work Simon, her wife and others had done for the local community. Simon reached out to the diocese for reconciliation, but after hearing nothing has since filed a lawsuit.

Kathleen Purcell, a high school teacher, was fired after she returned the Oakland, Calif., diocese's contract signed, but with newly introduced morality clauses crossed out. Purcell, formerly a civil rights lawyer, said a school's religious identity "is not a license to discriminate."

Eva Marlatt, director of academic support, refused to sign Oakland's new teacher contract and said it was an "unworkable dilemma," forcing educators to choose between a school community they love and a sense of personal integrity and social justice.

Richard Miller's contract as a teacher for a Cincinnati Catholic school for the deaf was not renewed because he lives with his male partner and their six children. Though the school knew of his relationship when Miller was hired, the teacher was told new morality clauses made renewing the contract "too risky."

Richard Hague ended 45 years teaching in Catholic education after refusing to sign the Cincinnati archdiocese's contract that explicitly bans employees from publicly supporting LGBT rights. In a letter, Hague said, "I simply cannot believe that Jesus would require me to condemn my friends."

Flint Dollar was fired as band director at a Georgia Catholic school when his plans to marry his male partner became public. Dollar has filed a lawsuit against the school, claiming discrimination.

Colin Collette, a music minister for 17 years, was fired from a Chicago-area parish after posting on Facebook about his engagement to longtime partner William Nifong. Collette met with Cardinal Francis George in the hopes he would be rehired, but the cardinal called his employment at a Catholic institution "impossible."

Benjamin Brenkert left the Society of Jesus after more than a decade, in part because of the institutional discrimination against LGBT people.

Barbara Webb, a chemistry teacher, was fired from a Michigan high school because she became pregnant outside of marriage, though she is in a committed same-sex relationship.

Olivia Reichert and Christina Gambaro, a lesbian couple, were fired from their jobs at a St. Louis Catholic high school. Though Reichert and Gambaro had remained quiet about their relationship, school officials fired them after receiving a copy of the couple's joint mortgage application.

Cases have also emerged in Europe this year:

Terence Weldon was refused a volunteer position with a UK-based Catholic humanitarian assistance agency for "campaigning against Church teaching," a reference to his blog on Catholic LGBT issues called Queering the Church.

"Silvia," a pseudonym, was fired from her position at a Catholic school in Italy over rumors she was a lesbian. Silvia has not publicly stated her sexual orientation, but Italian officials are still investigating the case as discriminatory.

Luis Alberto González was fired from teaching religion at a Spanish public school over his marriage to a man in 2012. Gonzalez had been teaching for more than 15 years, including two in which he was married. Catholic bishops have oversight of religion faculty in that nation's public schools.

[Bob Shine is on the staff of New Ways Ministry, a national ministry of justice and advocacy for LGBT Catholics.]

People | Catholic jobs lost over LGBT issues on the rise

Complementarity of the sexes: A trap