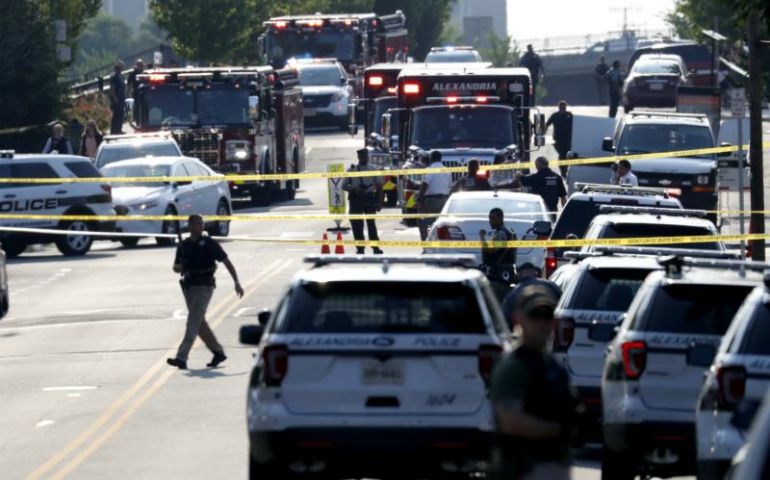 Alexandria, Va. — U.S. House Majority Whip Steve Scalise of Louisiana was listed in stable condition after being shot by a gunman early June 14 and transported out of a baseball field in Alexandria, a suburb of Washington. He was scheduled to undergo surgery.

Michael Brown, police chief for the city of Alexandria, said five people were medically transported from the scene of the shooting to receive medical care. Multiple news reports said two U.S. Capitol Police officers who were part of the Catholic congressman's protective detail also were shot, as well as an aide to Texas Congressman Roger Williams.

Scalise, a Republican, was with a group of House members and staff at a baseball practice to prepare for the 56th annual Congressional Baseball Game, played each summer by members of Congress.

Cardinal Donald Wuerl of Washington tweeted: "Our prayers go out for @SteveScalise, the Capitol Police and others wounded or affected by this morning's attack."

President Donald Trump said in a statement that he and Vice President Mike Pence were aware of the shooting incident in Virginia "and are monitoring developments closely."

"We are deeply saddened by this tragedy," he said. "Our thoughts and prayers are with members of Congress, their staffs Capitol Police, first responders and all others affected."

Scalise was first elected to the U.S. House in 2008, representing Louisiana's 1st Congressional District. Before that, he was a member of the Louisiana House and the Louisiana Senate, serving from 1996 to 2008.

Rep. Mike Bishop, R-Michigan, told a Detroit radio station that Scalise was standing on second base when he was shot.

"I was looking right at him," Bishop told. "He was a sitting duck."

Scalise's wounds are not believed to be life-threatening. He and his wife, Jennifer, have two children and are members of St. Catherine of Siena Parish in Metairie, Louisiana, a suburb of New Orleans. The couple's children attend the parish school.

Authorities said at least one suspect was in custody and was transported to an area hospital. Schools in the area near the shooting were immediately put on lockdown and bomb-sniffing dogs monitored the grounds of the U.S. Capitol at mid-morning.

Faith takes the forefront as Georgia Senate runoffs heat up