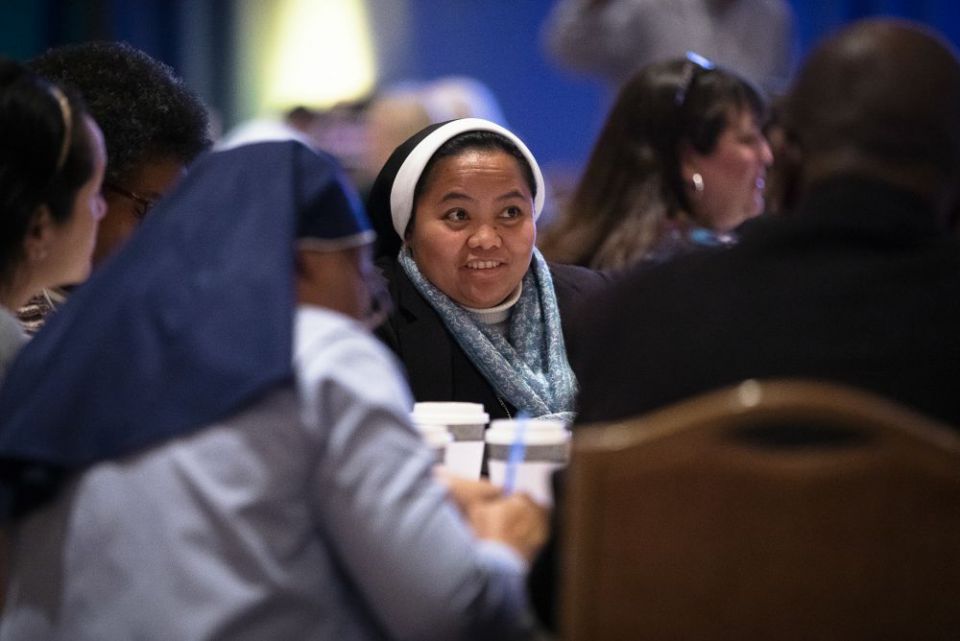 Women religious have a roundtable discussion about racism in the church and society Feb. 3 during the Catholic Social Ministry Gathering in Washington. (CNS /Tyler Orsburn)

Washington — An annual conference for Catholic social ministry leaders — usually held the first week in February — will be moved back a week next year to coincide with the annual March for Life, in an attempt to get activists to "cross-pollinate" one another's events in the run-up to the 2020 election.

"Our vision, especially with upcoming elections, is to help contribute to a more unified Catholic voice," said Jill Rauh, director of education and outreach for the U.S. bishops' Department of Justice, Peace and Human Development, which organizes the Catholic Social Ministry Gathering.

Rauh told NCR that she hopes social justice ministers will come early for the March for Life, and that anti-abortion activists will stay for the social ministry event, which includes a day of lobbying on Capitol Hill.

"This way we can talk about the variety of concerns that we care about as Catholics and bring attention, in a unified way, around those issues," she said.

Some attendees at this year's social ministry conference, held Feb. 2-5, were optimistic about the change and said they would consider coming early for the March for Life. But other expressed concern that abortion might overshadow the other issues typically addressed at their gathering, such as poverty, immigration, racism, militarism, housing and the environment.

"It would be nice, but my worry is what will happen to those issues that are considered 'smaller,' " said Tony Preston, a social work student at St. Thomas University in St. Paul, Minnesota.

In his work with the Hennepin County Mental Health Court in Minnesota, Preston helps connect people with housing, food, counseling and other resources. He sees continued and even increased funding for those social programs as "pro-life" issues, too — and advocated for them as part of the conference's final lobbying day this year.

"But abortion is the hot topic and it can overshadow other issues," he told NCR, noting the tendency among some Catholics to be single-issue voters on that issue.

"We are seeing that with our current administration that doesn't value life throughout life," he said. "They're pro-birth, but what about immigrants at the border, or children separated from their families? As Catholics, we are pro-birth, but we are also pro-life, from natural conception until natural death."

It has not yet been determined if there will be combined programming at the two events next year, Rauh said.

"There is a risk, but we're trying to do what we can to discourage polarization in the church. That's our goal."

The March for Life is organized by its own non-profit organization, but the Archdiocese of Washington hosts a Mass and youth rally before the march. Georgetown University and Latinos por la Vida (Latinos for Life) schedule one-day pro-life conferences the Saturday after the march.

The march began in 1974 to mark the anniversary of the Roe v. Wade Supreme Court decision legalizing abortion. It has grown to be what organizers say is the largest pro-life event in the world, attended by tens of thousands of people, including many groups from Catholic high schools and universities.

In recent years, the event has been criticized for being too closely aligned with the Republican Party, with prominent GOP speakers including Vice President Mike Pence, former House Speaker Paul Ryan, and President Donald Trump's advisor Kellyanne Conway. For the past two years, Trump has addressed the event via satellite.

This year, students from a Cincinnati-area high school were criticized after a video of them went viral. Media and others interpreted the students — some of whom were wearing "Make America Great Again" Trump hats — to be mocking a Native American activist.

The event began during the tenure of John Carr, who headed the Justice, Peace and Development office for more than 25 years. Its current executive director is Jonathan Reyes, a co-founder of the Augustine Institute in Denver who has been affiliated with other conservative Catholic organizations.

Although attendance at the gathering had declined in the 2000s, it has grown under Reyes, in part because of outreach to college students and people of diverse ethnic and other backgrounds. This year's 550 attendees included 75 who were part of the Young Leaders Initiative, and 95 conference-goers on full scholarships as part of the Diversity Outreach Initiative, Rauh said.

She said the U.S. bishops' Respect Life Office will be working with her office to plan next year's gathering, including convening focus groups to gain input from attendees. 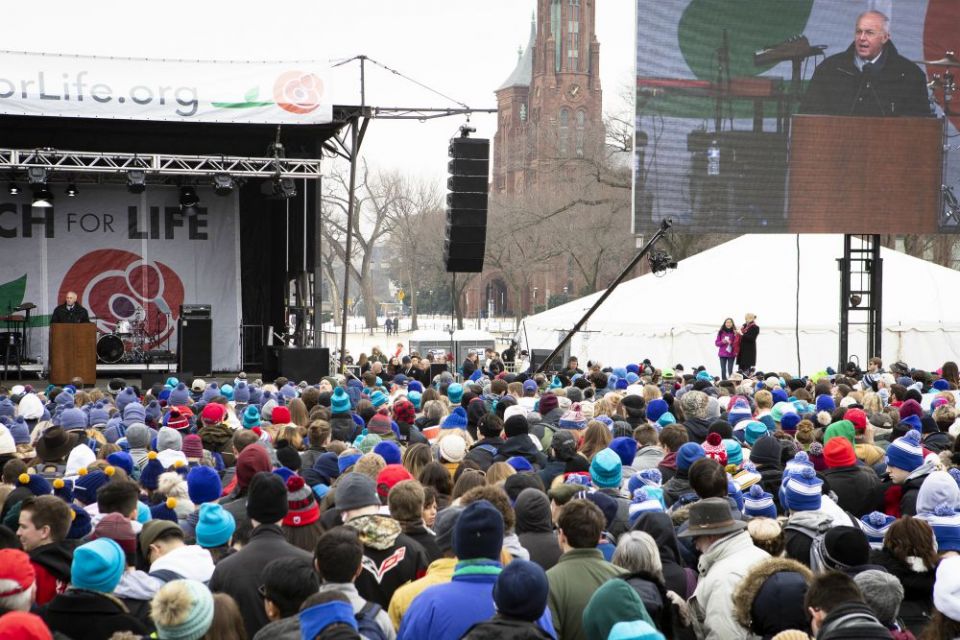 Carl Anderson, CEO of the Knights of Columbus, speaks Jan. 18 during the annual March for Life rally in Washington. (CNS/Tyler Orsburn)

At the U.S. bishops' conference, pro-life and other justice ministries are still served by two separate offices, but around the country, a growing number of dioceses and archdiocese are combining the two — both for financial as well as philosophical reasons.

"Bishops want a unified witness," said Robert Shelledy, who, as director of the Dignity of the Human Person Office in the Milwaukee Archdiocese oversees social justice ministries, respect life, Catholic Relief Services and the Campaign for Human Development.

Those responsibilities were combined in part for financial reasons — especially as the archdiocese moved through bankruptcy proceedings related to clergy sexual abuse — but it also made logical sense, Shelledy said.

"If we really embrace the seamless garment and consistent ethic of life, we need to respect people in our church who are working on different issues."

"All of Catholic social teaching flows out of the inherent dignity of the human person, so it touches from womb to tomb," he said.

Shelledy believes the date change for the Catholic Social Ministry Gathering to coincide with the March for Life is a good idea, although he recognizes that sometimes there are tensions between those involved in different issues.

Sabrina Burton Schultz, director of the Office of Life, Justice and Advocacy in the Diocese of St. Petersburg, Florida, also is excited about the change and plans to attend both events next year.

"We really need to come together with one voice. That would be pretty powerful," Schultz told NCR.

Yet she admits that bringing together the two constituencies may pose challenges, in part because of "misconceptions" each group has about the other. But working together may help break down those negative views, she said.

"If we really embrace the seamless garment and consistent ethic of life, we need to respect people in our church who are working on different issues," Schultz said.

Such respect has increased in the St. Petersburg Diocese, where the Respect Life Office was merged with a social justice committee that operated under the auspices of Catholic Charities as an intentional effort to broaden the definition of "pro-life," she said.

But in the Los Angeles Archdiocese, former members of a social justice commission that was combined with the Respect Life Office believe the move resulted in abortion overshadowing other issues.

The Office of Life, Justice and Peace was created shortly after Archbishop Jose Gomez came to Los Angeles from the San Antonio Archdiocese, where he similarly merged pro-life and social justice ministries.

Although the office also oversees health care, domestic violence, human trafficking, poverty, homelessness and other issues, not all receive equal treatment, said Richard Scholtz, who served on the social justice commission for eight years before it was disbanded.

"The preponderance of attention is on anti-abortion, pro-life issues," he said. "Secondarily, there is a focus on immigration. Most of the others are brushed aside."

Environmental issues were a main concern of the social justice commission, but former member Tony Fadale has been disappointed with the archdiocese's commitment to those issues since the merger, noting that very few speakers at this year's Los Angeles Religious Education Congress are speaking about creation care this year. "It's such a loss," Fadale said.

The archdiocese's Respect Life, Justice and Peace Office's webpage features a quote from Gomez in which he criticizes the "fault-line" between "self-described 'pro-life' Catholics and those who consider themselves 'peace and justice' Catholics."

"This is a false divide and one that is a scandal to Christ and the Church's faithful witness in society," Gomez wrote in a forward to the book, Catholics in the Public Square.

"There is a risk, but we're trying to do what we can to discourage polarization in the church," she said. "That's our goal." 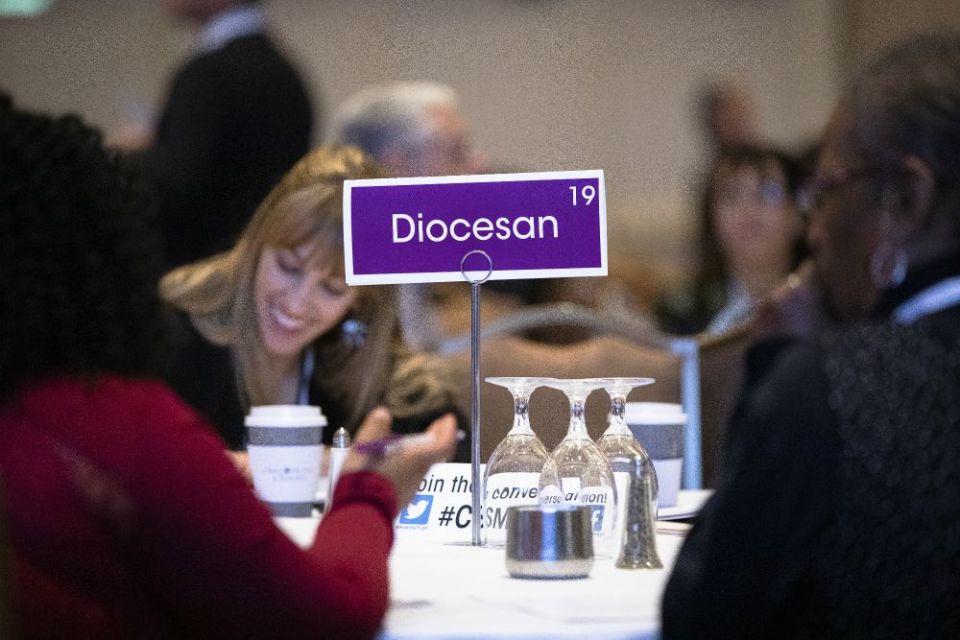 People have a roundtable discussion about racism in the church and society Feb. 3 during the Catholic Social Ministry Gathering in Washington. (CNS/Tyler Orsburn)

Solidarity is our word: My humanity is bound up in yours