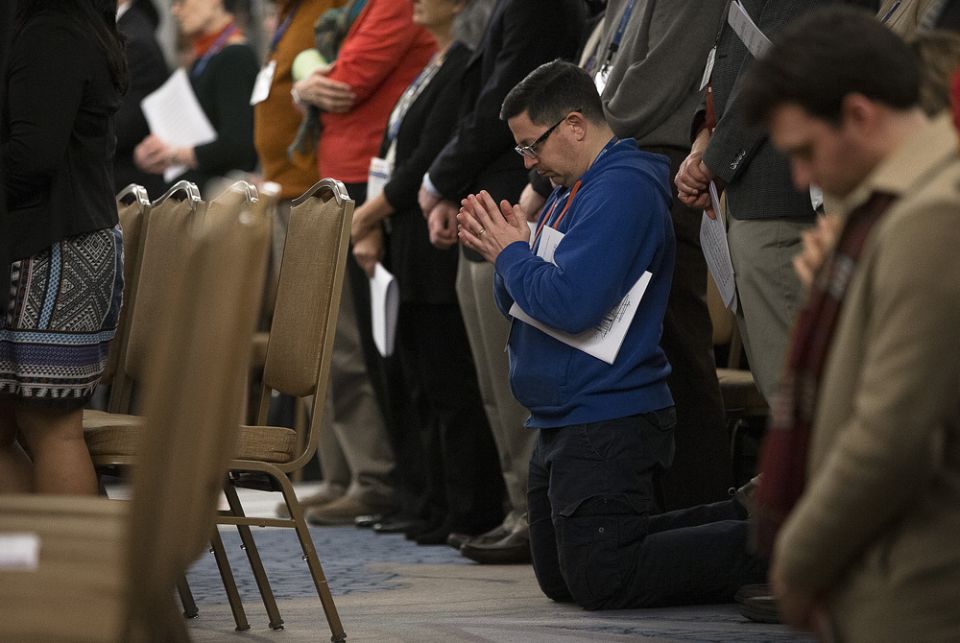 This year's Catholic Social Ministry Gathering, with a theme of "Bearing Witness: Life and Justice for All," was held Jan. 25–27 in Washington, D.C. Sponsored by the Department of Justice, Peace and Human Development of the U.S. bishops' conference, it coincided with the annual March for Life, held Jan. 24. The gathering drew about 640 participants and covered topics that span the spectrum of life issues, including capital punishment, human trafficking, family separation, incarceration, and maternal and child health, as well as the March for Life's focus on the abortion issue.

Organizers said it was the largest crowd in the more than 30 years the gathering of Catholic activists has been held. This year also marks several important milestones that are tangential to the annual gathering: the 25th anniversary of Pope John Paul II’s Evangelium Vitae ("The Gospel of Life"), the fifth anniversary of Pope Francis' "Laudato Si', on Care for Our Common Home" and the 50th anniversary last year of the founding of the U.S. bishops' Catholic Campaign for Human Development.

Cardinal Blase Cupich, archbishop of Chicago, gave the keynote address on Saturday, reminding those gathered that their baptismal call is to promote human dignity. He also presided at the welcome vigil mass. 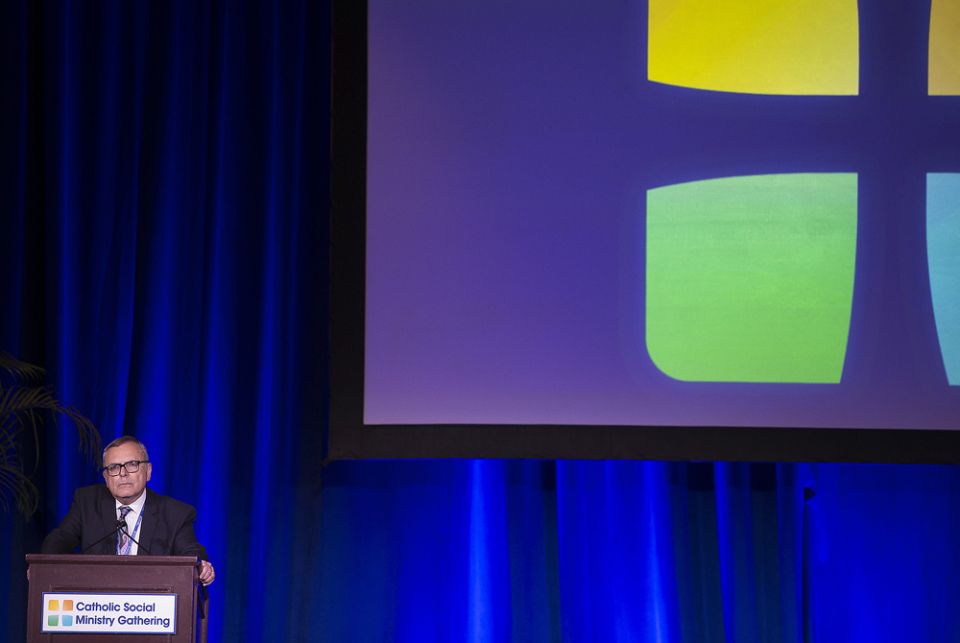 Richard Coll, director of the Office of Domestic Social Development for the bishops' conference, told NCR that it was the organizers' hope to have more crossover between participants in the annual march and the Catholic Social Ministry Gathering this year, both to take advantage of the energy that the groups bring to their events and to create greater cohesion between the two often separate communities.

"The theme is really to promote unity in all of our ministries, in life and the dignity of the human person," said Coll who, in his remarks before Cupich spoke, commended those present who had participated in the March for Life. "We think their witness on social justice forms a very important synthesis on Catholic social teaching. Together we can enrich each other's witness and provide unity on the part of the Catholic community across these key issues."

The timing of the gathering, right after the march, was providential, said Jill Rauh, director of education and outreach in the USCCB's Department of Justice, Peace and Human Development.

"Once we realized it, we thought it could be a wonderful opportunity to build bridges," she said. "We have been very intentional in how we've oriented the conference toward expressing unity as church and expressing a consistent care for life," especially in an election year.

Dan Misleh, founding executive director of the Catholic Climate Covenant, attended the march on Friday and distributed literature on climate change and care for the environment. His group was one of about 30 exhibitors present at the Catholic Social Ministry Gathering.

"We try to help people make the connection between all life issues," Misleh said, noting the passion of the pro-life marchers and adding that it's important to "expand the tent a bit. In upholding human life and dignity, it's important for us to be witness to each other's agendas."

At a panel discussion Sunday morning on "Building Bridges: Sharing Best Practices of Life and Justice for All," panelists discussed promoting the dignity of life even as doing so can be politically fraught for organizers and participants.

Moderator Darius Villalobos, director of diversity and inclusion for the National Federation for Catholic Youth Ministry, asked the panelists how, "recognizing challenge and climate, especially in an election year," they talk about life issues, "when language and vocabulary can be so charged?"

Kathleen Buckley Domingo, senior director of the Office of Life, Justice and Peace and director of government relations for the Archdiocese of Los Angeles, responded.

"This is a tough question, right? It's probably the question on a lot of minds here. It started off difficult and will continue to be, especially for those working in the church," she said. "Speaking about issues can be divisive if we don't put it in the context of being Catholic ahead of political party and human dignity ahead of other issues."

F. DeKarlos Blackmon, director for the Secretariat of Life, Charity and Justice in the Austin, Texas, Diocese, noted that a change in language — they now call their annual pro-life rally a gathering of life, charity and justice — was a way of signaling they wanted to talk about social concerns and family life in the same conversation.

"It brings everyone to the same table, and we sit around the table of the Lord without distinction," he said. He added, to applause, "Until we get to the point where we're arduously fighting for every one of those issues, we're not doing justice to the gospel of life." 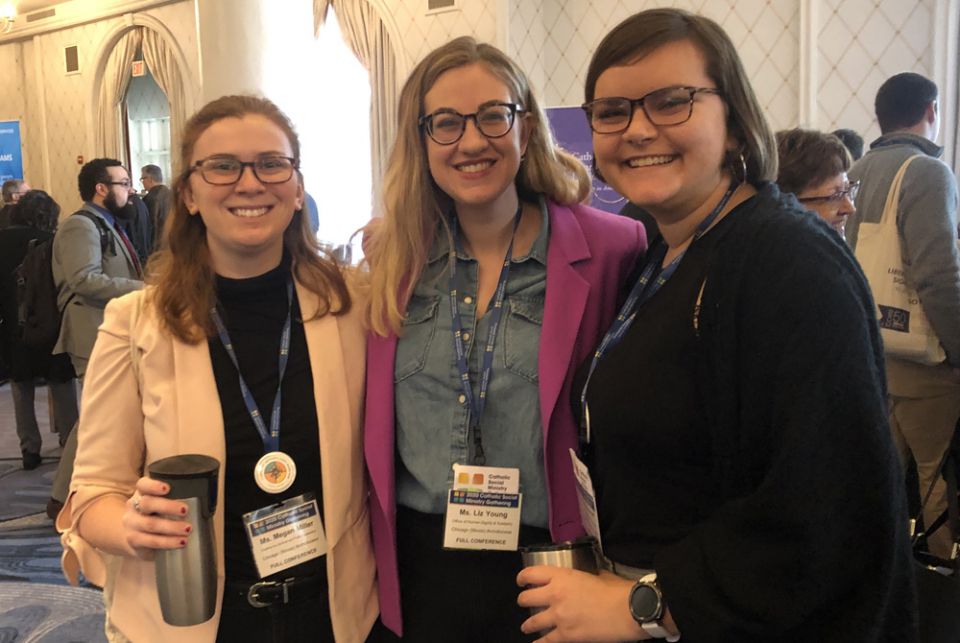 Cupich's Chicago Archdiocese was well-represented, including by Megan Miller of the Coalition for Spiritual and Public Leadership, and Liz Young and Corinne Woodruff of the Office of Human Dignity and Solidarity.

Miller brought 20 young leaders for the diversity initiative program; they spent Friday afternoon exploring the National Museum of African American History and Culture on the National Mall, while some of her colleagues from the respect life office attended the march.

Young spoke of the archdiocese's push to "unify ministries around a common foundation," including immigration, economic justice, and violence prevention. Whereas peace and justice issues were previously housed in a different department than respect life, she said, the reorganization is part of "recognizing the need for work for justice in other areas."

Kimberly Baker, programs and project coordinator for the Secretariat of Pro-Life Activities of the U.S. bishops' conference, was pleased with the way the timing of the gathering and the march worked out.

"It's very exciting that the two groups are converging and we have this opportunity for dialogue," she said. "We're all doing this for the church."

Church must recognize the gifts of older Catholics, pope says