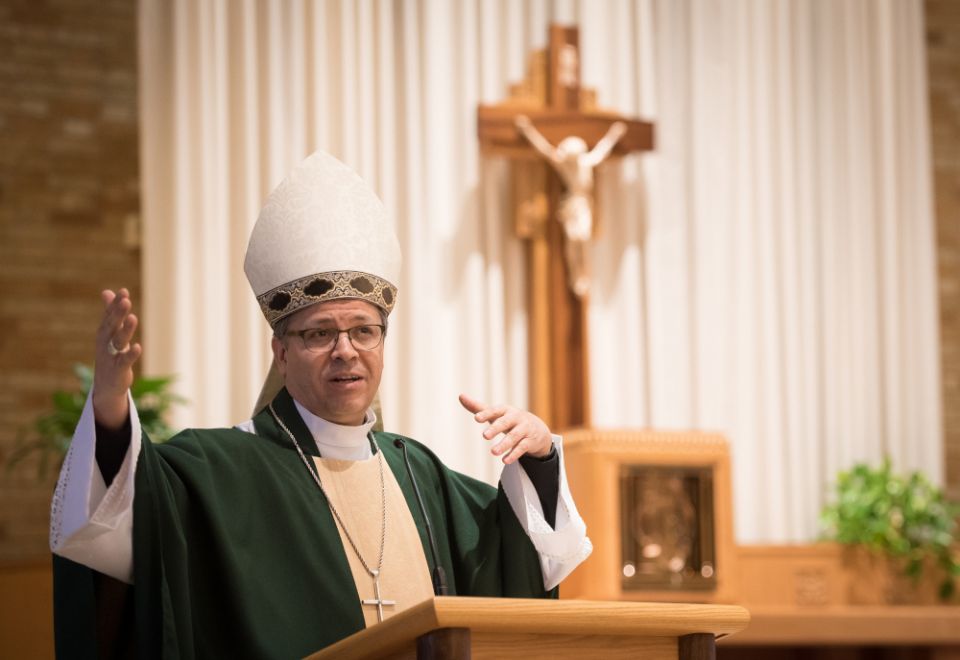 Washington — Pope Francis has appointed Bishop Alberto Rojas, who has been an auxiliary bishop of the Chicago Archdiocese since 2011, as coadjutor bishop of the Diocese of San Bernardino, California.

The appointment was announced in Washington Dec. 2 by Archbishop Christophe Pierre, apostolic nuncio to the United States.

Bishop Gerald R. Barnes, 74, heads the San Bernardino Diocese. He turns 75 next June, the age at which canon law requires bishops to turn their resignation into the pope. As coadjutor, Rojas, 54, automatically becomes head of the diocese upon Barnes' retirement or death.

Rojas, who was born in Mexico, is expected to relocate to San Bernardino in February to begin his ministry as coadjutor bishop. A Mass of welcome is planned for Feb. 24.

"We congratulate Bishop Alberto Rojas on his appointment to San Bernardino with hearts full of gratitude for all he has done for the Archdiocese of Chicago," Cardinal Blase J. Cupich said.

"We will miss this beloved shepherd and know the people of San Bernardino will soon come to appreciate the blessing his appointment will be for their diocese," he added in a statement Dec. 2. "I am particularly pleased that he will serve with and learn from Bishop Barnes, an outstanding pastor and one of our nation’s most respected bishops."

Rojas said in a statement he was grateful to the pope for his new appointment "and the opportunities it brings to serve God's people" in the California's "inland" diocese, as it is known. It is the nation's sixth-largest Catholic diocese and second largest in the state after the Archdiocese of Los Angeles.

"I look forward to learning about the diocese from Bishop Barnes as coadjutor and assisting him in this moment of transition," he said.

Rojas added: "I will be forever grateful to the Archdiocese of Chicago for being my first local mother church who welcomed me with open arms from the beginning. Many thanks to my three great shepherds and spiritual fathers: Cardinal (Joseph L.) Bernardin, Cardinal (Francis E.) George, and now, Cardinal Cupich.

"Thank you to my brother bishops and priests, deacons, religious sisters, vicariate teams, pastoral center employees, and all the wonderful people at the parishes. Please keep me in your prayers as I will do for you. Peace and blessings to all."

"I know Bishop Rojas as a fine priest, a prayerful man and a thoughtful leader," the archbishop said. "Entrusting him to the tender care of Our Lady of Guadalupe, and praying that God will bring many blessings to his children in San Bernardino."

He also was on the seminarian formation faculty of Mundelein Seminary from 2002 to 2009.

He was ordained a bishop Aug. 10, 2011, to serve under Cardinal George. He chose the phrase "God's love is all we need" as his episcopal motto, because the love Christ "gives to all his children is all that any of us need to achieve eternal life."

As an auxiliary, Rojas served as episcopal vicar in the archdiocese's Vicariate III and then in Vicariate I, the largest in the archdiocese with more than 500,000 Catholics in 51 parishes, two missions, two shrines. It includes the Shrine of Our Lady of Guadalupe and other ministries, and covers an area from the north suburbs of Chicago to the Wisconsin border.

On the national level, Rojas has had a number of key assignments on committees of the U.S. Conference of Catholic Bishops, including Hispanic affairs, liturgy, Catholic home missions and, most recently, as lead bishop for Region VII of V Encuentro.

The Diocese of San Bernardino was founded July 14, 1978, and comprises San Bernardino and Riverside counties. It has 91 parishes, seven missions and five chapels in its territory, and it is considered a home mission diocese; its cathedral is Our Lady of the Rosary Cathedral in San Bernardino.

The San Bernardino Diocese has over 1.7 million Catholics out of a total population of over 4.5 million.