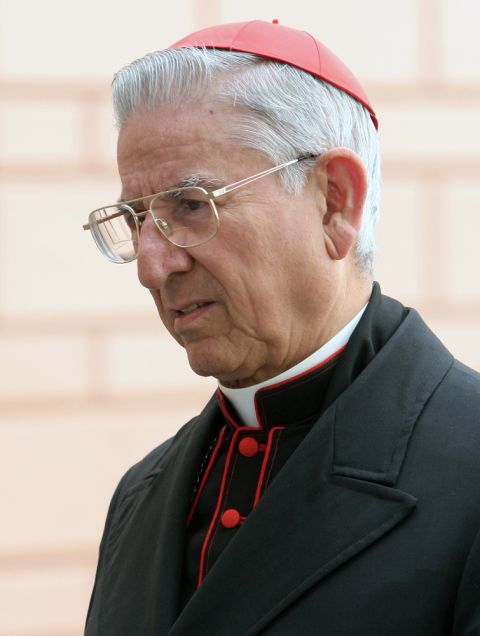 Colombian Cardinal Dario Castrillon Hoyos died May 18 in Rome at the age of 88. He is pictured walking near the Vatican April 16, 2005. (CNS/Nancy Wiechec)

Vatican City — Colombian Cardinal Dario Castrillon Hoyos, a longtime Vatican official, died early May 18 in Rome at the age of 88.

In a message of condolence to the College of Cardinals, the cardinal's family and admirers, Pope Francis praised his "generous service" to the church and described him as a "well-deserving servant of the Gospel."

The cardinal's funeral was to be celebrated May 19 in St. Peter's Basilica. Cardinal Angelo Sodano, dean of the College of Cardinals, was to be principal celebrant. Pope Francis was scheduled to officiate over the final commendation at the end of the Mass.

Castrillon formally retired a few days after his 80th birthday as president of the Pontifical Commission "Ecclesia Dei," the commission charged with outreach to the traditionalist Society of St. Pius X and assistance to Catholics attached to the pre-Vatican II liturgy.

With the cardinal's retirement, then-Pope Benedict XVI placed the commission under the Congregation for the Doctrine of the Faith; the realignment was seen as a response to the widespread criticism that arose a couple of months earlier when Pope Benedict lifted the excommunication of four traditionalist bishops, including one who denied the extent of the Holocaust.

Pope Benedict candidly admitted mistakes in the way he and other Vatican officials handled the reconciliation move with the bishops of the Society of St. Pius X. Many observers thought that Castrillon should have looked more carefully at Bishop Richard Williamson beforehand and briefed Pope Benedict about the bishop's radical views on the Holocaust.

For much of the time the cardinal headed the commission, he also was serving as prefect of the Congregation for Clergy. St. John Paul II had named him pro-prefect of the office in 1996 before naming him to the College of Cardinals two years later. Castrillon served as prefect until 2006.

Born in Medellin, Dario Castrillon Hoyos studied in seminaries in his native Colombia before being sent to Rome to study canon law. He was ordained to the priesthood in 1952 for the Diocese of Santa Rosa de Osos, Colombia.    After a couple of parish assignments, he moved to the diocesan chancery to direct the priests involved in the diocese's radio school, a literacy and formation program broadcast by radio for the benefit of rural farm workers and their families.

Later, he served as secretary-general of the Colombian bishops' conference and taught canon law at a local university.

In 1971, he was named coadjutor bishop of Pereira, and five years later, he became head of the diocese. Continuing to lead the diocese, he also served from 1983 to 1987 as secretary-general of the Latin American bishops' council, known by its Spanish acronym, CELAM. He was elected president of the council in 1987 and served as head of the organization until 1991.

Named archbishop of Bucaramanga, Colombia, in 1992, Castrillon led the diocese for less than four years before being called by Pope John Paul to head the clergy congregation.

The cardinal's death leaves the College of Cardinals with 213 members, 115 of whom are under the age of 80 and therefore eligible to vote in a conclave to elect a new pope.