Dolan and Colbert talk about faith, humor at Fordham 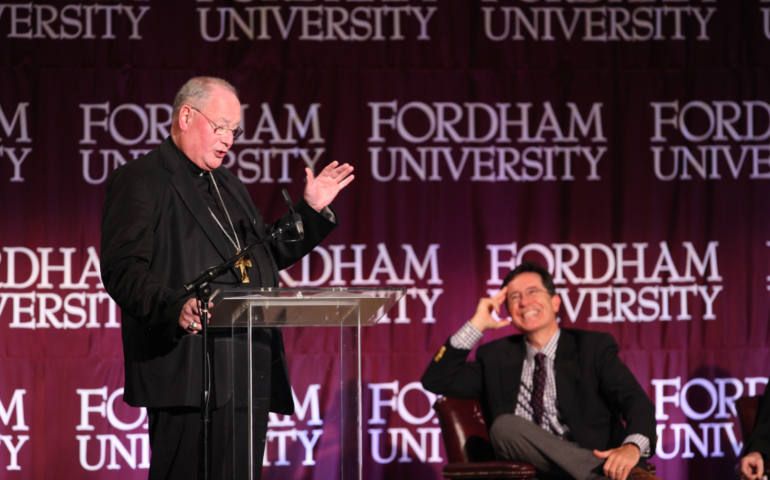 [Note: The Storify portion of this story has been updated to include an animated video that appeared during the Fordham event.]

On Friday night, two of the biggest personalities in American Catholicism today convened on the campus of a Jesuit university in New York to discuss faith, humor and how the two intersect.

Archbishop of New York Cardinal Timothy Dolan and comedian Stephen Colbert, host of the satirical news show "The Colbert Report," entertained a capacity crowd of 3,000 students at Fordham University at the much-anticipated event called "The Cardinal and Colbert: Humor, Joy, and the Spiritual Life."

Two days before the Sept. 14 event, Jesuit Fr. Jim Martin told NCR the Dolan-Colbert conversation came from two Fordham theology professors, Michael Peppard and Charles Camosy. The idea was a hit to all involved, with the only obstacle finding a date that worked for all three -- a task Martin joked "was only marginally less complicated than arranging the Second Vatican Council, but it should be funnier.”

Martin, a contributing editor for America magazine, author of numerous books and a growing media figure himself, said his role in the evening would be moderating the conversation between Dolan, Colbert and the audience.

"I'm expecting a great time and a packed house," he said.

While the event was blacked out to media coverage -- a few journalists were allowed admittance -- the tools of today's technological age made sure the event wasn't a completely private affair.

A mixture of student tweets, news stories and blog posts help paint a picture of the night's highlights.

Below is a Storify account of the night, using tweets, Facebook posts and other social media sources to recount the conversation.

People | Dolan and Colbert talk about faith, humor at Fordham

Three gentiles got FDR to save Jews

Women are still not heard in the climate policy conversation