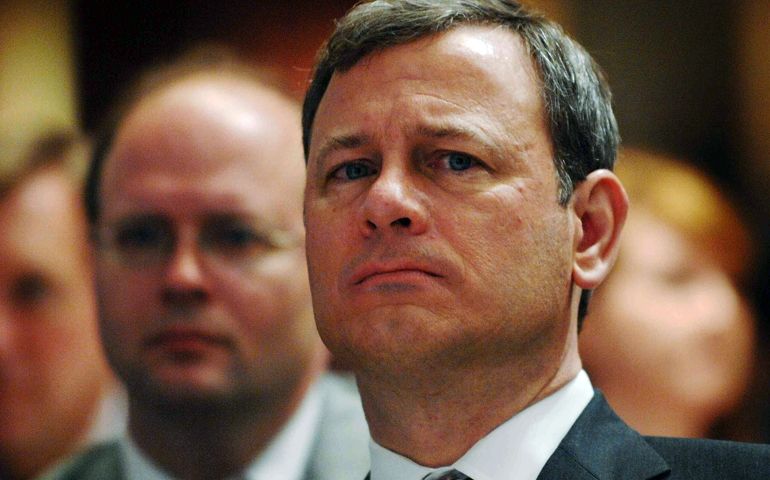 From federal budget debates echoing with catch phrases like "subsidiarity" and "common good," to a vice presidential contest between two members of the faith, it's clear: Catholics are engaged in the larger culture like no other time in the nation's history. We help shape national conversations and hold influential posts that affect lives across the country in profound ways.

Our choice for person of the year acknowledges this growing reality. Decisions made by him and his court, which currently includes a total of six Catholics, altered in a fundamental manner the way in which U.S. politics are conducted, ensured that a major policy goal of the U.S. church for almost a century will be implemented, and limited civil law's reach into the personnel policies of religious institutions.

For 2012, our person of the year is John Roberts, chief justice of the Supreme Court of United States of America.

After passage of the Patient Protection and Affordable Care Act in 2010, the national conversation almost immediately shifted to whether Roberts and his court would let the new law stand. With his commanding decision in June, Roberts upheld the law, ensuring that about 30 million additional Americans will be covered by health insurance by the year 2019.

Catholics animated by the social teaching of the church have waited long for this moment. "Health is a precious good for the person and society to promote, conserve and protect, dedicating the means, resources and energies necessary so that more persons can enjoy it," Pope Benedict XVI stated in 2010, following a long line of explicit papal teachings that affirmed health care as a basic human right.

For decades, the market failed to deliver. Now, the U.S. government, belatedly following the lead of the rest of the advanced industrial world, will ensure what the church deems a right of all.

Upholding the Affordable Care Act will have a profound impact on the Catholic church's ministries.

NCR's first pick for a person of the year, made in 2010, was Daughter of Charity Sr. Carol Keehan, president and CEO of the Catholic Health Association and a strong advocate for the health reform act. Keehan can attest to the profound improvement the law will have on Catholic hospitals' ability to care for the poor and bring the healing ministry of Jesus to the world.

Challenges remain. Conservative estimates indicate about 25 million Americans will remain uninsured despite the law, among them some of the nation's most vulnerable, including undocumented immigrants. The Affordable Care Act is of vital interest to the church and the nation, and it could not have become a reality without the courage of Keehan and the chief justice.

After the court announced its decision in June, NCR urged the U.S. bishops and their allies to stand firmly behind this historic legislation. We renew that call: "Affordable care for all. Access for all. Lower costs for all. That is the recipe for a decent society and any continued obstruction is properly called indecent."

As we celebrate Roberts' decision on health care reform, we have also registered deep concern regarding another decision of the Roberts court -- one that opened our political system as never before to the influence of big money.

A year ago, Sheldon Adelson became almost a household name. The billionaire casino owner single-handedly funded the presidential campaign of Newt Gingrich. Still, the money he gave Gingrich was a small percentage of the tsunami of money in the political system this year, much of it from undisclosed sources, and all made possible by the Roberts court's ruling in Citizens United v. Federal Election Commission in 2010.

We appreciate the court's concern for the First Amendment, and we hope the Sierra Club's voice will always be heard, but the court's dismissal of common-sense campaign finance laws has tipped the scales of our political system to the wealthy even more than they were before.

Having seen the result of its handiwork, we hope the Roberts court will find a case that permits it to pull back from the abyss of unlimited, undisclosed campaign contributions.

In January 2012, Roberts engineered a rarity in recent years, a unanimous decision in Hosanna-Tabor v. EEOC. The case involved the religious liberty of a Lutheran church to fire a minister versus her right to bring a discrimination suit. Writing for the court, Roberts stated, "The Establishment Clause prevents the Government from appointing ministers, and the Free Exercise Clause prevents it from interfering with the freedom of religious groups to select their own." Whatever the value of enforcing anti-discrimination laws, the court argued, anything that entangles the government in the selection or termination of ministers is a very bad thing. That decision could bear heavily on ongoing challenges to the controversial Health and Human Services mandate on contraceptive coverage, should cases reach the high court. The mandate, a rule promulgated as part of the new health care act, narrowly defines religious institutions and was the catalyst for the U.S. bishops' recent emphasis on religious liberty. A number of challenges to the rule are making their way through the courts.

Our person of the year comes from the Catholic milieu, formed and educated in its institutions. He is reserved and circumspect in public, has a reputation for being a family man and an active Catholic who attends his children's sporting events. His wife, Jane, also a lawyer, is active in such nonprofits as Feminists for Life (which gave qualified approval to the court's health care ruling) and the environmental group Citizens for Affordable Energy and, in the recent past, as a member of the advisory board of the Washington Home and Community Hospices.

Roberts does not hide his religious affiliation, but he also demonstrates that while religious attachment may provide a philosophic underpinning for decisions with ethical significance in public service, it doesn't guarantee unanimity of thinking or consensus on such issues. Other Catholics on the court are Antonin Scalia, Anthony Kennedy, Clarence Thomas, Samuel Alito and Sonia Sotomayor. Their votes were split on the health care and Citizens United decisions.

That is as it should be in a pluralistic democracy such as ours. This is a point that should be remembered when evaluating the political behavior of legislators, too.

By upholding the constitutionality of health care reform and by opening the door to a flood of campaign spending, rarely has a prominent Catholic had such a profound effect on the life of the nation. It is an influence that is not likely to diminish in the coming year as the court hears two cases related to same-sex marriage that have the potential to profoundly alter the status of a fundamental element of U.S. culture.

For all that, and as a sign of continuing Catholic engagement in the American public sphere, Chief Justice John Roberts is NCR's person of the year for 2012.