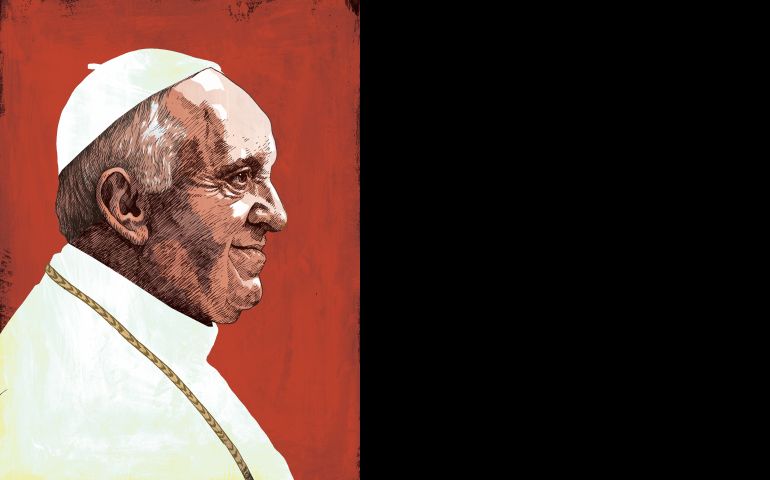 (Paul Lachine)
This article appears in the NCR's Person of the Year feature series. View the full series.

A year ago, Pope Francis' photo adorned the covers of Rolling Stone, The New Yorker, TIME magazine and The Advocate. The latter two named the pope their person of the year. Francis' personal humility and simplicity, his common-sense rhetoric seasoned with homespun charm had captured the imagination of Catholics, non-Catholics and even nonbelievers. Acutely aware of the power of simple language and of images, Francis set about molding a pontificate for the age of Facebook and Twitter. Though he has little computer knowledge himself, Francis harnessed these tools for a new kind of evangelization.

Many among our readers, editors, staff and contributors embraced the message he advocated. They heralded not just a change in tone and style, but a change in substance and direction. Just as many among us, however, were not convinced. The refrain was, "Yes, but what has he done? To what real change can we point?" And so NCR resisted naming Francis our person of the year for 2013.

A year later, the resistance is weakening. We can name many points of disagreement with Francis: He is consistently tone-deaf in the way he speaks about women. We do not believe he clearly understands the powerful contribution women are already making to church life, and we believe he is mistaken not to appoint more women to leadership positions in church administration. His remarks to the November symposium at the Vatican, "An International Interreligious Colloquium on the Complementarity of Man and Woman," suggest he and the church hierarchy need an updated theology and science on human sexuality. Despite these objections, we also find a growing list of accomplishments.

One clear message from the conclave that elected Francis was that the new pope must reform the Roman Curia — not only to bring it up to date, but to restore its mission of service to the church at large. We have said that the reform of that institution needs changes in at least three key areas: a change in culture; personnel to support the reform; and new structures, policies and procedures to make it work.

Francis has made clear movement in all three of these areas. He has worked quickly and resolutely to build on reforms of the Vatican's financial system begun under Pope Benedict XVI. The Vatican bank will soon be held to the same international standards of transparency and accountability that other international institutions must follow. That is a great step forward and should go a long way in erasing the scandals that have periodically wracked that institution. Moreover, one of his appointees, Australian Cardinal George Pell, has in place a plan to modernize the administration of Vatican offices outside the bank as well.

The "examination of conscience" Francis administered during his annual Christmas greetings to the Curia shows that he is determined to change the culture of the Vatican. Some news accounts report that the cardinals and curial officials "sat stone-faced" during Francis' recitation of the diseases afflicting the Curia. The cultural change will eventually affect even the local chancery. Francis has told his nuncios, his ambassadors in countries around the world who are instrumental in selecting bishops for the local churches, to find "pastors who are close to their people … who are meek, patient and merciful" and to avoid "those who are ambitious, who seek the episcopacy." As he makes more appointments, the culture will change even among the leaders appointed by his predecessors.

We have taken Francis to task for not understanding the seriousness of the sex abuse crisis in the church. In the last year, Francis has made tremendous strides in this area by — most important — meeting with victims of clergy sexual assault and by appointing a high-level commission of professionals, half of whom are lay and women, to advise him directly. The commission has yet to act, but its formation indicates the pope is grappling with the issue.

Francis has also acted on his own words to take the church out of the sanctuary and into the streets. The first two teaching documents of his pontificate, last year's apostolic exhortation, Evangelii Gaudium ("The Joy of the Gospel"), and the encyclical on the environment anticipated this year have established the priorities of his papacy, speaking for the poor of this world where they are most vulnerable: squeezed by the global economy and threatened by environmental degradation. His teachings aren't entirely new, but follow the progression of these issues through all recent papacies, reaffirming that in Catholic social teaching people come before profit and property.

"Out in the streets," Francis has also demonstrated a certain deftness as a global diplomat. In the spring, he brought together in the Vatican Gardens Israeli President Shimon Peres and Palestinian President Mahmoud Abbas for an "invocation for peace" in the Holy Land. We are just learning that he played an instrumental role in thawing relations between Cuba and the United States. Peres has said that neither the United Nations nor its peacekeepers "have the force or the effectiveness of any one of the pope's homilies."

Perhaps Francis' greatest contribution as pope will be his embrace and advocacy for the Synod of Bishops as central to the governance and mission of the church. The two synods that Francis has called to discuss family life may result in changes in pastoral practices that will welcome Catholics back into full participation in the church, but the process the synods begin may well be their most important outcome. Francis is making of the synod what Pope Paul VI envisioned it to be in 1965: a body that would provide "for a continuance after the [Second Vatican] Council of the great abundance of benefits that … result of our close collaboration with the bishops."

By giving the synod such importance and by appointing his Council of Cardinals and convening them regularly, Francis is reshaping how a pope governs. He is one among many bishops, and they guide the church together. His preference for the title of bishop of Rome above all other titles clearly shows his intent. His reaching out to Ecumenical Patriarch Bartholomew underscores his desire for a church in full communion while also celebrating its diversity.

For all these reasons, we name Pope Francis NCR's person of the year for 2014.

Editorial | Editorial: Person of the year for 2014