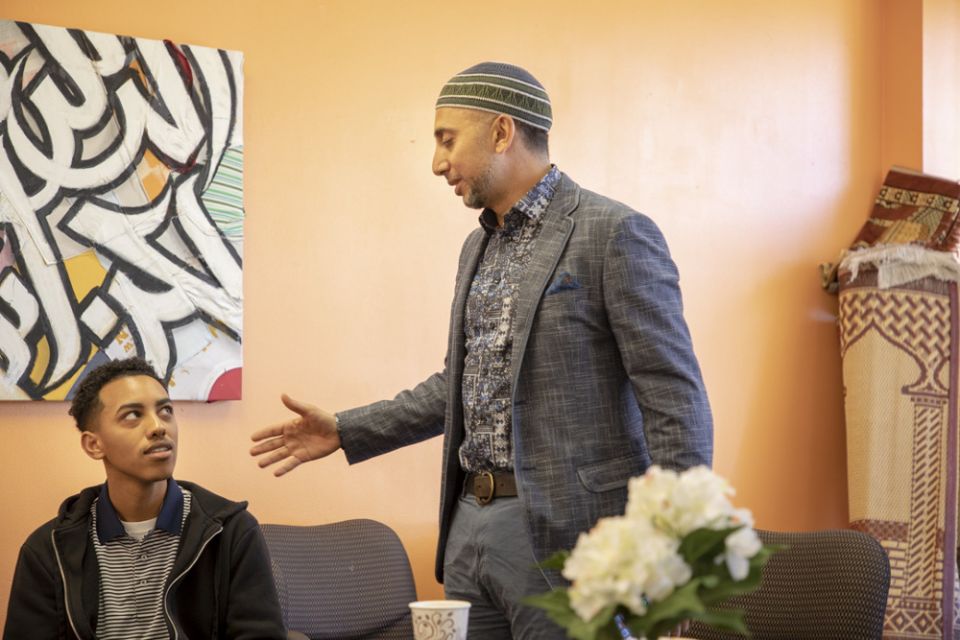 University of Portland student ambassador Ezedin Jabr, a social work major from Vancouver, Wash., listens to Rami Nashashibi, winner of the 2018 Opus Prize for his work as founder and director of the Inner-City Muslim Action Network in Chicago. (CNS/courtesy Opus Prize Foundation)

Portland, Ore. — "My brother was murdered by a drive-by shooting at the age of 18 years old," says a young man from Chicago whose emotion-stained voice plays in a video.

"I lost my sense of humanity at that time 'cause how could a world be so cruel to take someone away who didn't hate no one," he continues. "How do you rebuild that?"

The three finalists of this year's Opus Prize, one of the world's largest faith-based awards for social entrepreneurship, are in their own ways working to rebuild such lost hope and provide opportunities for the most vulnerable — while inspiring the next generation of leaders to do the same.

"These organizations, led by unsung heroes, are doing noble and holy work, and the prize is meant to be a catalyst for campus and community conversations and actions," said Daniel McGinty, who helped oversee a partnership between the Opus Prize Foundation and the University of Portland.

Each year a different Catholic university is chosen as a partner to select finalists and host the award ceremony. The University of Portland was founded by the Congregation of Holy Cross.

The 2018 first-place $1 million prize was presented in November to Rami Nashashibi, founder and director of Chicago's Inner-City Muslim Action Network, known as IMAN. The organization operates in a city plagued by gun violence; the young man who lost his brother in a drive-by is one of the countless people aided by the organization.

The prize will help IMAN expand an initiative that provides life coaching and job training to young men who were incarcerated.

The other two finalists, who each received $100,000, were Daniel and Avitha Victor of Agape Rehabilitation Center in Chennai, India, and Holy Cross Fr. Daniel Panchot and José Antonio Patron of Yancana Huasy in Lima, Peru.

Panchot established Yancana Huasy to integrate children and families with special needs into public schools, faith communities and neighborhoods. The organization also advocates on behalf of people with disabilities for greater access to public transportation and facilities.

The Victors are a married Christian couple in India who support and educate teens and adults with special needs by providing professional skills and promoting personal confidence and independence. Those with disabilities often are rejected in Indian culture.

"We have seen many disabled persons locked up in their homes," Daniel Victor said in a short video about his organization.

Don Neureuther, executive director of the Opus Prize foundation and a member of The Madeleine Parish in Northeast Portland, said the goal of the prize is twofold.

"It makes a transformative gift" to individuals applying universal Catholic values to bring hope and opportunity "to those who need it most" and it "builds on Catholic universities' commitment to service."

"That relationship with universities has become equally important as the prize itself," said Neureuther. Among past partners are the University of Notre Dame in South Bend, Indiana, The Catholic University of America in Washington and Gonzaga University in Spokane, Washington.

The universities' main responsibilities are to draw on their alumni networks to make nominations; recruit jurors who select three finalists; choose student ambassadors and faculty members — and this year a University of Portland trustee — who travel with Opus Prize Foundation representatives to the three sites; and they host the award ceremony.

As part of the 21-month-long partnership with the Opus Prize Foundation, the University of Portland welcomed the finalists to campus for a week. 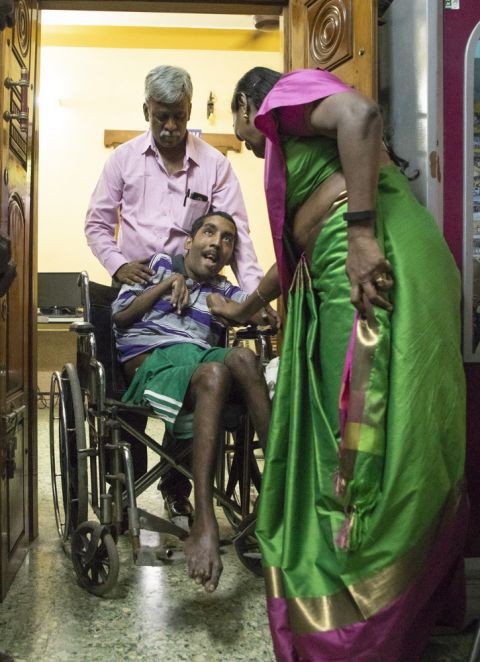 There was a panel discussion and an interfaith prayer service where each organization shared parts of its sacred text, read in Spanish, English and Arabic.

Delegates from the organizations also came to classes "to inspire and challenge us," said McGinty, director of the university's Dundon-Berchtold Institute for Moral Formation and Applied Ethics. Then Nov. 15, the university held the award ceremony.

McGinty sees the ceremony as "just a prologue" for Portland.

"If we are done after the ceremony we have failed," he told the Catholic Sentinel, newspaper of the Archdiocese of Portland.

Julianna Oliphant, a student ambassador sent by the university to Yancana Huasy in Lima, believes the partnership's effects will endure. Her trip last spring already has influenced her career goals and relationships.

"The absolute joy and passion of everyone who worked there — it was contagious," said the junior, who is studying nursing.

Oliphant said watching staff serve those who are both poor and disabled made her think about people with limited access to care in the United States and how she might aid underserved populations.

Portland Auxiliary Bishop Peter Smith was part of the jury that selected the three finalists.

He said the prize's interfaith nature is a "recognition that in most cases faiths have an element of 'we have to serve our fellow men and women and try and bring about good and make a difference in society.' "

Scott is special projects reporter at the Catholic Sentinel, newspaper of the Archdiocese of Portland.