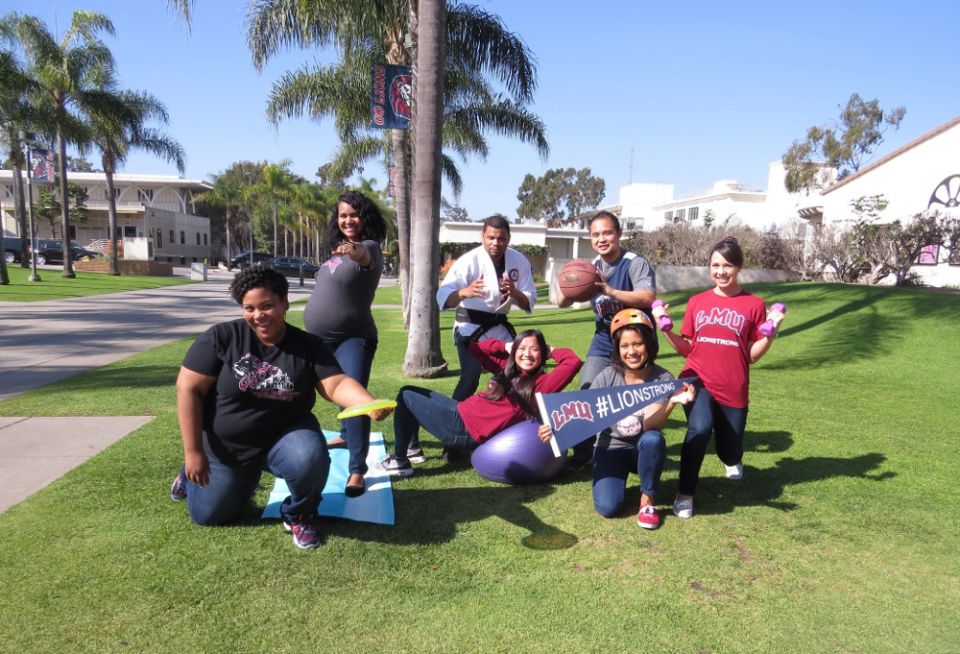 For the month of March, bragging rights at many a Jesuit university play out on courts across the country during the NCAA men's and women's basketball tournaments. Gonzaga, Xavier and Creighton have become regular entries. Georgetown, Marquette, University of San Francisco and Loyola University Chicago have all hung banners — the latter the tournament's latest Cinderella story, after its 2018 Final Four run. (Fellow Catholic schools Notre Dame and Villanova cut down the women's and men's championship nets, for Villanova their second in three years.)

But a month earlier, the burden of Jesuit campus pride is falling increasingly on the shoulders, or more often the feet, of faculty and staff competing in a different kind of contest generating a lot more active bodies.

Begun in 2013 between two California schools and now including 20-plus nationwide, the challenge seeks to do just what it says: get faculty and staff at Jesuit campuses moving each February, with the most active minutes of exercise crowned the champ.

"Our tagline for the challenge is 'Every minute counts,' " said Suzy Kisylia, wellness program manager at the University of San Francisco and administrator of the Go Move Challenge. "It encourages everyone to participate. So even that person who might just go for a 10-minute walk every day, we want them. Their minutes count, so we want them tracking." 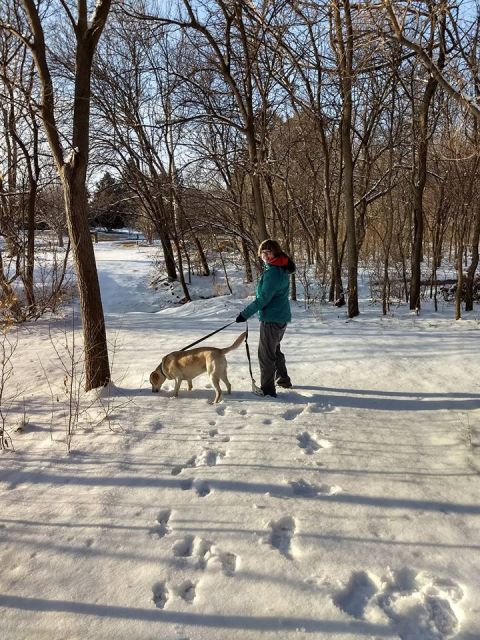 Dawn Obermiller, a wellness coordinator at Creighton University in Omaha, Nebraska, takes a walk with her dog, Charlie Rose, Feb. 23 as part of the Go Move Challenge. (Dale Obermiller)

The challenge defines movement as "any intentional exercise that causes at least a small increase in breathing or heart rate." Participants individually log minutes at GoMoveChallenge.org under four categories: cardio, strength/resistance, mind/body and sports/fitness. Walking and running are common, as are fitness classes and yoga sessions. There are also triathlons, hiking and rock climbing.

In addition to total minutes, the challenge also recognizes the school with the highest average minutes per participant. Beginning in 2019, it will also place schools into regional divisions to further stoke geographic rivalries.

The challenge began as a friendly competition between rec centers at the University of San Francisco and Santa Clara University in California. Inspired by a similar program among schools in the Pacific 12 Conference, in 2015 they opened the Go Move Challenge to fellow Jesuit schools. Participating campuses doubled that year, then doubled again, before jumping to 20 of the 28 Jesuit universities in 2017.

"I'm actually ecstatic of where it is," Kisylia said. "Because when it started, we had no idea. We just thought it was this challenge between us and Santa Clara."

As the challenge expanded, one school has emerged as a behemoth of moving: Loyola Marymount University in Los Angeles, champions in three of the past four years, including 2018 when it racked up a whopping 575,304 minutes of movement.

"Every time they've participated, they've won," Kisylia said. "They, like, blow out the numbers."

As at other schools, Loyola Marymount has seen more and more people sign up for employee pre- and post-work fitness classes it organizes, whether yoga, Zumba, boot camps or "non-sweaty" martial arts. It has also incorporated weekly challenges and raffles as additional incentives. So far, they appear to be working, with staff in Student Affairs posting their daily step totals on their doors, while other departments organize weekend hikes in the Hollywood Hills.

"LMU in general tends to have a competitive side, so it was just nice to connect with other Jesuit universities," Sia said.

Seeing the West Coast schools post photos on the challenge's Facebook and Instagram pages, with participants outside and in shorts under sunny February skies, only fuels the competitive fires of their chillier peers in the Midwest and the East.

"We joke around when we see the California schools out in their T-shirts walking at lunch or whatever they're doing — playing Frisbee or riding bikes to work — and we think, 'Oh man, there's a foot of snow on the ground and it's 29 degrees,' " said Erin Coyne, associate director of wellness and recreation at St. Peter's University in Jersey City, New Jersey.

For Brent Blazek, director of alumni and parent relations at Rockhurst University in Kansas City, Missouri, "dealing with cold weather is a fun part of the challenge." The school's leading minute-logger last year thinks the groundbreaking in November on a new health and wellness center will only help combat the elements.

Some have tried to work winter to their advantage, incorporating ice skating, sledding, and even for one St. Peter's business professor, skiing in in the Swiss Alps around St. Moritz.

Dawn Obermiller, a wellness coordinator at Creighton University in Omaha, Nebraska, where average temperature highs in February hover just above freezing, said rather than bristle at any potential unfair climate advantages, they've come to wear their cold-weather minutes as a badge of honor. In 2017, Creighton finished second and had nearly 492 campus members register minutes. In a way, she added, the challenge happening in winter is "good timing": a motivator to stay active at a time when it may be easier to just hibernate beneath a blanket.

Creighton's wellness staff report more people during the challenge walking on the campus' two indoor tracks. They also encourage taking the stairs when possible. Occasionally, someone may log minutes from snowshoeing or other winter activities, but more often it's of the inside variety.

"A lot of indoor stuff, for sure," Obermiller said.

At the annual Association of Jesuit Colleges and Universities conference, Kislyia has fielded questions from snowier campuses about the challenge timeframe. But February is actually an ideal month, she said, as schools are back in full swing by then, and it can help stretch New Year's resolutions a little longer. Plus, if the weather was perfect, it wouldn't be a challenge. "It's a little nicer" in California, she conceded, "but we get rain and also cold."

Whatever the weather, the Go Move Challenge has had a way of bringing campus communities together.

At the University of San Francisco, different departments have organized group walks in Golden Gate Park and around campus. Some have found it a great reason to get out of their offices and explore parts of campus they don't normally see, such as the hidden tower stairs of its St. Ignatius Church.

Blazek too has organized lunchtime workouts on the athletic field in the middle of the Rockhurst campus. He's also invited colleagues to join early morning workouts of running stairs and hills at the National World War I Museum and Memorial in midtown Kansas City.

Go Move's benefits extend beyond extra physical activity. People have shared how the challenge helped them lose weight or stop smoking. But it's clear a big part of the challenge has been fun, and that too is a core component of wellness, organizers said. Basically, it's a lot easier to get moving when you're having a good time.

"It's all about increasing more joy, more happiness into every day," said Sia at Loyola Marymount. 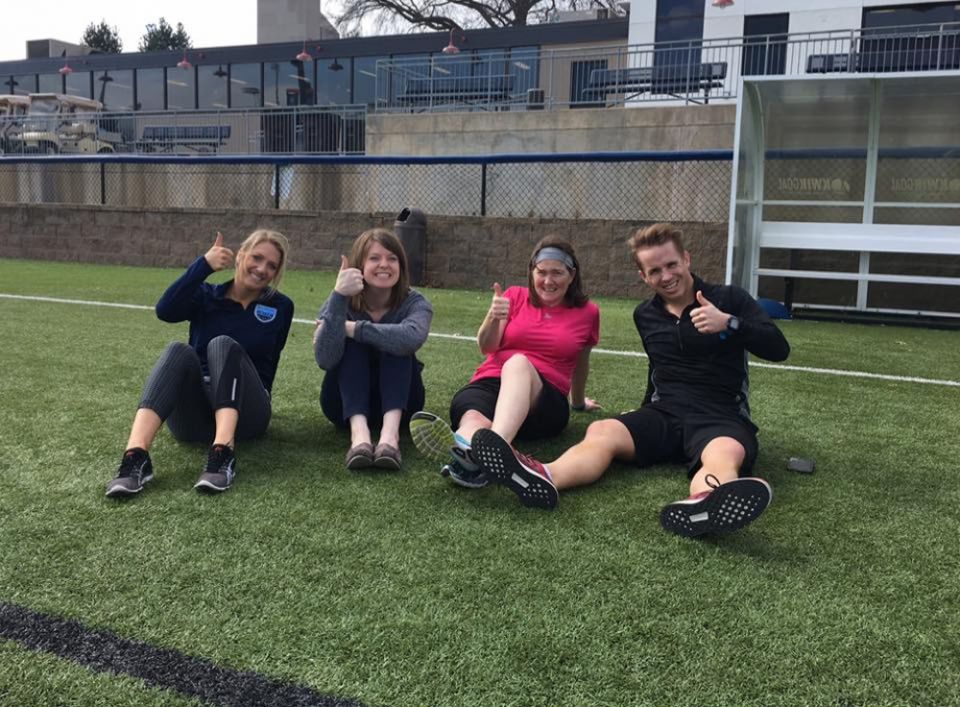 Perhaps the biggest appeal of Go Move across campuses has been the competitiveness it drives: whether with colleagues, across departments, or as a school united behind a common goal to beat other Jesuit institutions.

Debby Halstrom, part of the information technology department at Creighton, regularly checks to see where Creighton ranks compared to its rivals in the Big East Conference. It's that campus-as-team aspect that puts the Go Move Challenge ahead of other wellness programs, she said.

That feeling of representing the school has really spurred school spirit with some departments, said Amber Benda, a Creighton wellness specialist.

"We're not competing on the court, but we're still competing against Marquette and Gonzaga and all the same schools that the basketball teams play against," she said. The wellness staff added they have some secret side challenges in the works "to sort of raise the stakes" this year.

At St. Peter's University, home of the peacocks, they draw great satisfaction from strutting their title as reigning champs for most average minutes per participant, a feat achieved in just their second year competing.

Because campus is located just across the Hudson River from Manhattan, walking is an ingrained part of life for many there, as well as biking and running. Coyne, a runner herself, has organized lunchtime runs during the challenge. She's also put together staff games of flag football and kickball, something she more commonly did for students, inside the bubble-roofed Yanitelli Recreational Life Center.

People routinely come up to Coyne and ask if they're going to do Go Move again, or possibly more than once a year. "The fact that people want to do it more than one month I think is always a good sign," she said.

As for Go Move 2019, Coyne has a message for all other Jesuit colleges: These peacocks are ready to fly.

[Brian Roewe is an NCR staff writer. He is an adjunct professor at Rockhurst University.]